It was the gruelling grand final match-up that everyone expected as Australia’s Jillaroos met New Zealand’s Kiwi Ferns in the World Cup final. 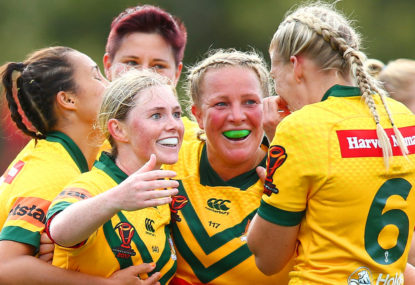 Australia’s women’s sevens team has started off the 2017-18 with a perfect six from six to take gold in the first leg of the World Sevens Series in Dubai. 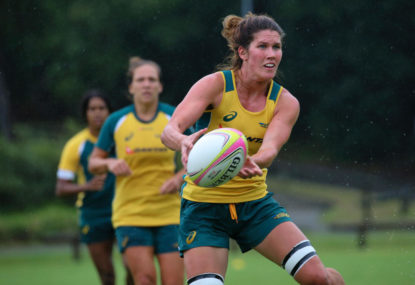 Sydney was treated to the inaugural Sydney leg of the Women’s HSBC World Rugby Sevens Series over the weekend. 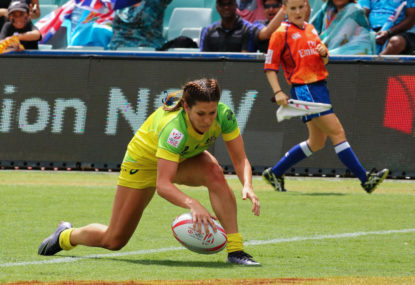 It has been a big week for Australian women’s rugby. 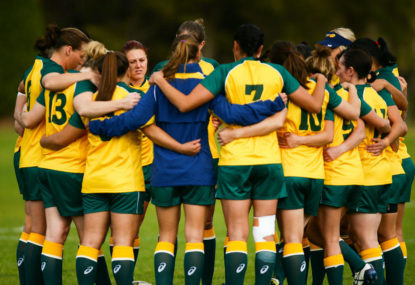 The point you bring up about some of the players not ‘looking like footy players’ because they don’t have a certain body shape is something I don’t agree with and find it unimportant to point out. These women are out there playing footy. They have done the pre-season. They train each week. They come out on game day and perform. Why does it matter if they look, as you ever so ‘delicately’ put it, like someone whose “post-match protocols comprise a pie, ciggie and half a dozen pints.” They are there because they can play footy not because they look might look good in the shorts.

Thank you for writing this. I am loving the coverage, every day I read a new story about a different player who has an incredible background and that is something that I think makes the AFLW so special. while most professional men players have gone through a similar pathway to playing in the AFL, the women are coming from so many different backgrounds, be it sports, careers, lifestyles. It is so interesting and inspiring to read about this and the media is doing a great job in sharing such stories with the fans to build connections with players who they had been completely unfamiliar with until this season.

I think we need to acknowledge that there are really vocal pockets of society who dismiss the AFLW simply because it is women playing footy. Valid criticism is embraced by the players. As Daisy Pearce wrote in the Age today, going from having no stats recorded and no games filmed to having all this and more shown to them as part of their training, the players can learn and grow and change their game for the better. It is a shame that people feel they cannot offer such criticisms for fear of being labelled sexist but it has to be recognised that the comment threads on posts about the AFLW have people making gross remarks about players and the AFLW in general so people are defensive of opinions that could be taken negatively.

And as a sport loving nation dealing with the end of the cricket season and waiting for the NRL, AFL and Super rugby to get into gear, is it any wonder that the AFLW is covered so heavily? How else are we meant to fill the void in our lives?

Don't like AFL Women's on the news? Change the channel

I read elsewhere a comment from two friends who were Blues and Pies fans respectively. When asked why where they at the AFLW they simply said “It’s Blues vs Pies, why wouldn’t we be here”.

Can’t wait to see the traditional rivalries and new grudges develop in the AFLW.

Crowds, community and a concert-feel at AFL Women's

I bought tickets to the Sydney 7s to specifically see the Pearls and the other women’s teams play. I prefer watching the women’s to the men’s because I can actually relate to the women and dream about being in their position myself! I had never experienced the feeling I had on Friday at the pool games were it dawned on me that I was watching women just like me (give or take the speed/strength/fitness) playing a sport I love at the elite level. I had a few guys around me quip about how heavy the hits were, how quick the players were and the aggression in the rucks.

The Pearls are Australia's best. The ARU must support them

I’ve found the lack of discussion surrounding this story such a shame. With Australian society becoming more open in its discussions around mental health, it is a missed opportunity to not give Hogg’s story more thought. How many young men would have found comfort in the fact that a man like Hogg has also felt how they may be feeling. There is also the growing movement asking the question what does being an Aussie bloke actually mean. The main message to come from this is that men can and should be able to share their emotions more freely. Brad Hogg, the Australian sports star who dealt with and overcame his mental health issues, is a powerful example of this. It is a shame it has not been highlighted more in the mainstream media.

Why has cricket's most important story been shelved?

So good to see corporate sponsors pushing for a stronger commitment to women’s rugby. They are powerful allies that can push for greater support when sporting bodies may be questioning investing in female development.