Inspired by Peter Darrow’s article about the best All Blacks since 1970, I thought it would be fun to put together a team comprising the best players I have seen 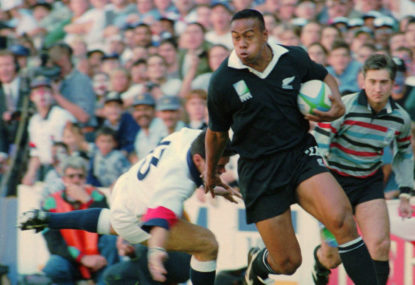 NP I enjoyed your article and I agree with most of it. I personally think the new World League proposal is terrible. For one, it will seriously devalue the World Cup. However, your credibility took a bit of a knock with your question “why should South Africa profit from not building suitable venues?” South Africa has the best rectangular stadiums in the world – by a country mile. It has 12 stadiums capable of hosting a World Cup final (and I write this as an Australian, where we have only one decent rugby stadium, in Brisbane). Seven of those are spectacular new stadiums built for the soccer World Cup, at least five of those would be far better than anything, and I mean anything, in Europe including Twickenham, Millennium and Aviva.

Terrible decision. Cheika should have been sacked.

Apparently one of RA’s reasons for not getting rid of him is a lack of funds to pay out his contract and replacing with a new coach. Instead, what do they do? Retain him on his huge salary AND employ Scott Johnson as Director of Rugby – no doubt also on a substantial salary. Where is the financial logic in that?

1. Ireland had played their best team in the first test;

2. The Boks hadn’t blown it in Brisbane (everybody who saw that game knows that the better team lost);

3. Nicolas Sanchez hadn’t been injured just before half time Salta (he was controlling the game beautifully and the Pumas fell apart completely after his departure).

Then it would have been one win from 13 and even RA could not have retained him. When they did their review did they consider the quality of those so-called “wins”?

If Cheika had won only one from 14 in 2018 instead of four, would he survive? Of course not – even this board of RA would be forced to fire him. But the reality is that one from 14 probably should have been the result.

The first test against Ireland – Ireland didn’t play their best team and when they did they won the remaining two tests.

The Springboks in Brisbane – the Boks blew that match and anyone who watched it knows that the better team lost.

Argentina in Salta – I’m not persuaded that the Wallabies performance in the second half was brilliant, as some commentators (wearing rose tinted spectacles) proclaim. When the Pumas lost Nicolas Sanchez to injury just before half-time they fell apart. He had been controlling the game brilliantly and in the second half, without him, Argentina were woeful (probably the worst rugby I’ve ever seen them play).

So that could (and probably should) have been one win out of 14 tests – against Italy! And some people suggest that he should remain. It beggars belief!

As to a replacement, RA have burned their bridges with Jake White. What about Wessels? He’s not going to win the World Cup (but neither is Cheika) and he can then grow into the role for 2023.

Cheika must go, even if it means losing at the World Cup

It could have been so much worse. Cheika’s record this year is 3 from 11 so presumably it’s those three wins that have saved his bacon. But have RA bothered to analyse those wins. None of them were convincing and all could have been losses. In the first Irish test they did not select the best team. South Africa absolutely blew it in Brisbane and should have won that game easily. And I’m not convinced about the Wallabies’ reported brilliance in the second half at Salta. The Pumas were woeful in that second half, probably the worst 40 minutes they had ever played . In the first half their game was being superbly controlled by the brilliant Nicolas Sanchez but when he went off injured before half-time they lost their way completely. If he had stayed on I think Australia would have lost that game.

So Raelene it should really have been 0 from 11. Not much of a “plan” but you are still backing your ma!

Why do Wallabies coaches have immunity until the World Cup?

The depressing thing is the Wallabies of 2018 are even worse than everyone thinks. As dismal as it is the record of 3 from 11 could easily have been 1 from 11. The Springboks absolutely blew it in Brisbane and the Wallabies should never have won that match. As to Salta too much praise is heaped upon the Wallabies for that second half. Yes, they were good, but the Pumas imploded playing probably the worst 40 minutes of rugby I’ve ever seen from them. In the first half the game was being superbly controlled by Nicolas Sanchez but when he went off injured before half-time they lost all of their structure. I believe that if he hadn’t been injured Argentina would have won that game. Pity in a way, because a record of 1 from 11 would surely have forced RA to make the necessary changes.