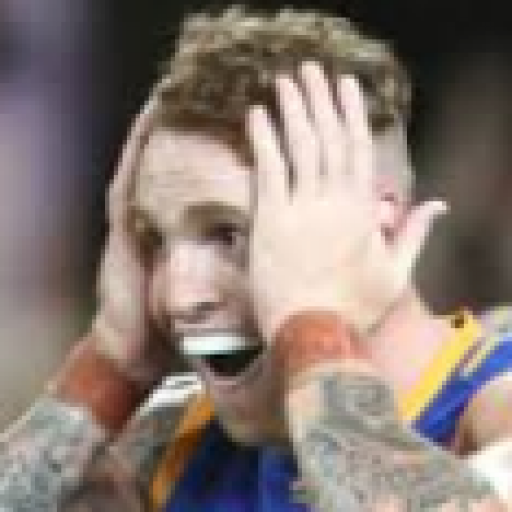 We had our moments around the turn of the millennium but that game in 2000 where nsw scored 56 points and did the grenade celebration after the try, my god that sucked. Was practically sackcloth and ashes up here at the time

We can only hope christo

Peter, perhaps it’s because everyone knows Eddie would squeal like a pig stuck in a drain if the afl even contemplated giving the swans a concession over buddy’s contract. He earns his critics by shoving his oar into a lot of debates he doesn’t need to be involved in.

I want to see the Suns beat the Crows, that’s my wish for this season. The Crows have been the flattest of flat track bullies in recent years, piling up 100+ scores against the cellar dwellers and going to water against contenders, would be good to see the Suns finally get one over them after 13 straight losses with an average margin of 60ish

It’s an old man injury, that’s for sure. Not even sure keeping him in cotton wool is going to improve the situation, every chance he starts pulling up sore due to underwork, as opposed to overwork.

Be interesting to see if the AFL lets the Swans off the hook salary cap-wise if he retires early. Going to be an almighty storm if they do.

I think for anyone from queensland who follows league and watches SOO the meaning of it is always going to be there – sticking it to NSW is not something that fades in the heart of your average Queenslander! I do disagree though that it doesn’t mean as much to NSW – I’d argue instead that I think their fans maintaining the faith through a decade of series losses shows how much commitment they really have. Would be interesting see how much care factor would still be there if it was QLD losing 12 out of 13 series. Hopefully I never have to find that out, 3 years in a row was bad enough.

In terms of how tribal and raw the passion for Origin is in QLD, I don’t doubt it’s become a bit more sanitised since the heady days of the 80’s and 90’s off the field, but I think the underlying desire to see NSW get taken down is very much still there.

Personally I’m far more interested in how Origin will be received given it is going to be played as a standalone series at the end of the season. I have been wishing for something like this for years, I have never really been a fan of SOO squatting in the middle of the regular season, because it is a huge distraction while it is ongoing, not to mention distorting the season through player unavailability, injury etc. So I think having it as a standalone event will mean even more focus on it, since there’s no other league ongoing. Will be looking forward to it regardless of where it’s played and how many fans it’s being played in front of.

Freo to finish a Boltonesque 17th this season. Lots of promise for future but not much. This season is a free hit for Longmuir with zero expectations so he’ll be trying a few things out and will happily chalk it up as a development season, an investment in the future. Will be a long year if they don’t get any games at home.

in unrelated news, I see Dardy McCrafty won the best doker poll, beating out such contenders as Roaring Lobster, Sonny Bill Walters, Matt Crabener and Darcy Trucker – hopefully they get a big season from him, they will need one

Dylan Shiel is A grade until he kicks it

For what it’s worth, I agree with this. I have no issue if they delay the T20 world cup so they can host the IPL. if it means we can have both comps without any issues over player availability then that’s a win win.

Five years ago Dyson Heppell was considered an A grader, and he has quite quickly slipped into oblivion, really.

I think Hurley is still close to A grade.

who would know spruce. all I know is I jump on here between discussing super and fire off a few missives, great way to kill a few minutes ready time. Apparently punching out a reply with his thumbs is a massive investment of time for Nat so he assumes it’s the same for all of us.

All I really wanted was him to stop following me around like a bad smell. He shows up on so many of my comments now. I think if I posted in e-sports he’d be there claiming I’m bringing politics into overwatch while he talks about Campbell Newman.

Maybe the trick is to use lots of multi-syllable words, also known as free flowing BS. Complexity is often the achilles heel of the broncos fan, lord knows I see enough of those beer gutted gronks wandering the wilds of brisbane city so I’m probably doing a public service keeping him at home on the computer.

Only in extreme circumstances I assure you

I think you’d find if it was someone else I’d be happy to have a more nuanced conversation but I’m afraid I marked your card some weeks ago as not being worth the time. Opinions are made for disagreeing with after all. Maybe you should stop talking to me if I frustrate you so.

“Campbell Newman. Swept to national significance after his response to the ’11 floods as Mayor. The Libs dropped him in against a drowning Anna Bligh and they took all but 5 seats to become Premier. With that same gung-ho attitude, he took on the unions, the doctors and anyone else who stuck their head up. 3yrs later he lost by just as big as margin.”

I’m deeply suspicious of anyone labouring under the delusion that anything said on this place actually matters.

I think what happened – the shutdown, and the resumption is all to the good. No issues with it restarting now. I think Vlandys is wrong though to say if he had his time over again he wouldn’t have shut down the game. Numpty comment that he will move on from.

Yeah but he’s a violent scumbag. Harris Andrews might not remember much of the incident but plenty of Lions fans do. Would not want him anywhere near the club.

Happens all the time in all codes unfortunately. The Sheeks of the world constantly decry the standards of sport in the present day, and cling like a drowning man to the glories of the past. Such claims are impossible to verify or factually disprove, based as they are on pure opinion, so if someone’s recalcitrant fortress is strong enough it can resist all evidence to the contrary.

I think anyone peddling this notion of an alternative reality where the game didn’t shut down and things kept going is a fool. For starters, it would have only taken a week or two for several NRL players to get covid and then his comp would have crashed anyway because teams would have had to have stand players down and be fielding gutted sides. Or does Vlandys really think all of his chargers would have obeyed social distancing orders and kept themselves at home and not taken any risks? They couldn’t manage it even when it was required by law so I don’t see how the absence of legal consequence would have improved their adherence.

More to the point, this implication that the world is somehow a worse off place because we didn’t keep NRL going for a few months is just flat out garbage. I am deeply suspicious of anyone gagging to have the country get back to full roar straight away because at the heart of it they’re only pushing it because they want to make more money.

If the Lions could buy anyone I would tell them to go and get Tom Lynch off Richmond.

If Collingwood wind up playing Richmond in a grand final I will be cheering for the Pies, Richmond fast approaching Hawthorn levels of insufferableness in recent years