The Broncos’ demise is multifactorial, and the problems won’t be going away without mass changes and accountability from multiple members of the organisation.

As a Brisbane Broncos fan, it would be great to see the club develop a genuine rivalry in the NRL. It makes sense to set up another club in the city. 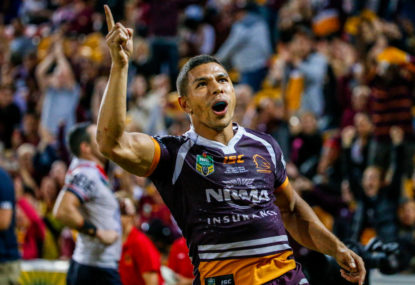 He didn’t rule it out when asked about it, saying he has a great relationship with Kevvie having worked with him at Melb and in Origin. The Broncs have to do something or they will lose support fast

Exactly. I don’t think anyone would be too disappointed, even with this inexperienced team if it at least looked like they were making an effort

You can actually read can’t you Rob? The first half of your comment makes it sound like I was carrying on. Not once did I say it wasn’t fair. I think I was pretty objective and definitely not crying a river

I think this team (in a few weeks with a few players back and with a few players like Dearden needing some time off the bench to get fitter for a full 80) would have the right balance of experience and explosiveness:
1 Isaako
2 Farnworth
3 Staggs
4 Kahu
5 Oates
6 Croft
7 Dearden
8 Lodge
9 Luke
10 Haas
11 Fifita
12 Glenn
13 Ofahengaue
14 Milford
15 Flegler
16 Bullemor
17 Teo
Boyd LRO, TPJ traded 😛 Probably could also consider Oates to bench if we need a forward with a bit of experience on the bench. Milf I would only drop to the bench if Dearden was playing the house down off the bench or in scratch matches

My point is that the laughing in the dressing room points to a wider cultural problem, just like going to play the pokies the night before a final.
I think Gillett was asked to medically retire to free up space. We definitely miss McCullough and his 50-odd tackles in the middle, and his experience. McGuire might be cancer in the dressing room but why weren’t these players replaced or traded for players of similar experience levels? It doesn’t take a genius to work out that you need some forward leaders, guys who’ve played between 100-200 games to steer us around the park, put their heads down when things are tough and tell Joe O and TPJ to pull their heads in.

The disappointing thing about the rebuild and the resulting form slump though is that it didn’t need to happen.

While I was not one of the fans booing, I can definitely see where they were coming from. I will not be wasting my money buying tickets again this season (we have our season memberships rolled over to next year but pay for individual tickets this year). I definitely disagree that the effort of the team is not one of the issues – no shoulders in tackles, letting other players make up for your poor defensive reads, bad tries under the posts, losing by over 50 twice in 4 games, and basically all the points I made in the article are about a lack of will.

Thanks Paul. Yes I agree – dropping or cutting players may be pretty reactionary. I hope Kevvie will come on board with the review (as specialist backs coach or similar). I think if the players won’t play for Seibs they will play for Kevvie.

Agree that fixing up the defence (and therefore convincing players to play for each other and the coach) would fix most of our problems. But I think putting players on notice for their mistakes and stupid penalties would also quickly fix a lot of these issues. TPJ wouldn’t be selected if I was the coach

My opinions in the article have been based on the abysmal showings over the past five weeks (and to an extent the end of last year), not just this weekend

Glad it has at least got a few reads – thanks. I think it makes it sound much more emotional than it is – I think I mentioned an emotion once (in the first paragraph). Tried to be objective

Agree with everything you are saying apart from moving on Alex Glenn. He is one of the only ones trying out there. He has so much passion in the jersey he looks like he wants to deck the next Broncos who drops the ball. I saw him make 3 tackles from marker in a row Saturday night – all heart. He would be on no more than about $250,000 so we are definitely getting value from him

I’m just going to point out here in the comments that I didn’t choose the headline. I wanted it to be ‘The Broncos’ problems are multifactorial’ which is more the gist of what the article is about

As a Broncos fan and member – the draw sucks! I can’t stand Thursday games. We have 6 of them. having a quick look through the other teams, Melbourne have 3, Souths have 5 and Dragons have 2. You can’t fully relax while watching a Thursday game as you have work and school the next day, and when restrictions are lifted it won’t be like you can entertain a few mates while watching a Thursday game or go watch the game live and have a few beers afterwards. I hope they revise the draw next year.

I’m not sure I get what is so good about free to air games anymore now. Pretty much everyone I know has some kind of streaming service, most people I know have Kayo or some other way of watching live games. Paying for TV seems to be becoming increasingly common. I say split the different timeslots evenly across all teams.

NRL free-to-air fixtures for 2020: Where does your team sit?

Great summary. My wife and I laughed out loud at this. Especially Storm=Nickelback and Roosters=One Direction

Really interesting article. Found the Newcastle story fascinating. Would love to read more about the Crushers (they were just before my time). Also loved the fun facts

To quote Phil Gould – “No, No, No, No, No!”. There is absolutely no way us Brisbanites would support an ex-Sydney team just because it was forced on us. Least of all an unsuccessful one. I can’t think of one Sydney team that would survive here if it was transplanted.

It is not like we are Melbourne, with no established history in RL. We have our own culture and history here, and to see that disregarded just to save a failed Sydney team would be a kick in the teeth for Redcliffe, Ipswich, Wynnum etc fans

Is it time to go Brodie?

This is a better proposal than what Gus Gould put forward because at least you have given some consideration to the extra travel the National/out of Sydney conference would have to do by giving them an extra home game.

The other way to do it would be to split into 3 conferences of 6, based roughly around geography – North, South and West. This would keep local rivalries going and with good marketing new ones could arise. You’d play your own conference twice 10 games and other 2 conferences once each (12 games).

The benefits of a two-conference NRL structure

When I see him on the sidelines at Broncos game (lately he has been firing the T-shirt cannon!) I often wonder what might have been. Imagine him on one wing and Oates on the other!

He would be one of the dominant wingers in the competition and one of the first pciked for Australia and Queensland if he kept going at the rate he as going.

Good of the Broncos to give him a job. I think they paid out his contract and gave him a job in marketing. He must have done well at it cos that original contract would well and truly be up

Think I read that Kevin is Jharal’s uncle

I’m sorry, but the ‘not enough talent’ argument is a dumb one. Nobody can justify it with any substance or any evidence, it is just an opinion. Watch the QLD cup and tell me there is not enough talent. It is an easy one to get around anyway (if it is a problem), if you draw some players from outside Australia (I would target PNG and Fiji) and target players from outside RL (e.g. Track and Field, Rugby, Even American Football)

The 17 teams idea negates the best outcome of expansion – 1 more game for broadcasters and one more game for fans to engage with.