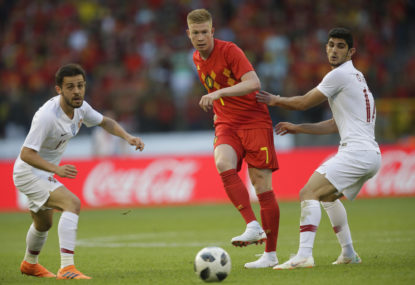 I think the point Ian is making is that England’s strength clearly lies in attack. They’ve got a wealth of world-class attacking options that were both on the field (Kane, sterling mount) and on the bench (Rashford Grealish Sancho etc). They tried to hold on 1-0 through fear of conceding – which to be fair, is somewhat understandable given its a final. However, this is clearly the wrong approach for Southgate, as he had a number of players who could’ve put the game to bed. It’s ridiculous that he had such an array of attacking talent, yet refused to make use of it.
The difference with Italy I’d argue, is that quite often their strong point has been in defence (Bonucci, Chiellini, Cannavaro, zambrotta etc) so it would make a bit more sense for them to take that approach.

Thanks Ian, really appreciate that – it’s interesting to gain an English perspective on the game! On one hand I can can see why they were so defensive (nerves?) but with such a talented group of players – especially attackers – Southgate needs to have more belief in himself and the team. I recall Trippier also scoring very early against Croatia, so you’d think he may have learnt his lesson with how that game finished, but unfortunately for England (and you!), he hasn’t. Must be frustrating. However, the good news of course is they’re still a very young team, so success at Qatar could very well be on the horizon!

Cheers for the comment Marcel. Fair point, I’ve never been in that position. However, I do think I’d rather have played a part in the game, touched the ball etc, rather than merely taking a penalty. That’s personal opinion of course.

I also wouldn’t say it should be put completely down to stats, but at the same time they are a useful and interesting aspect to consider. Particularly in a match such as this where England have had severe problems in the past, it would have, at the very least, provided Southgate with a source of reason.

You’re not the only one, i’ve never been a fan of it either. Always seems like they’re being very indecisive and giving the keeper a lot of time to predict where its gonna go.

Calm. If you re-read my comment, you’ll see that not once did I say England controlled the game. They tried to hold off the Italians – and they did so for a significant portion of the game. There is a significant difference.
Bonucci and Chiellini are not full backs – they’re centre backs. Do you really think the other 9 players wouldn’t have also had it in their “plan” to take the best penalty “you could ever see”?

Good point. I haven’t looked at that, but it could quite possibly have played a role. Italy were certainly in control for most of the proceedings, but we would have to attain a bigger sample size before such a judgement is made.

It’s human nature that if you’re ahead, that you don’t want to concede. Of course Southgate could’ve intervened, but the reality is the players are naturally going to seek to a protect a lead. It’s a lot easier to concede than it is to score.
Sacking would be harsh – they were a penalty shootout away from winning the Euros. Would you still call for his sacking if they had won the shootout?

You say substitutes score all the time – quite frankly, they don’t. On the biggest stage, they miss almost twice as often as those who played the full 120 minutes. Of course there will be exceptions, and well done to Bernardeschi for scoring against the Swiss, but the stats don’t lie.
As you’ve suggested, there may very well be other factors at play – and maybe Southgate did pick the wrong stats, but at the end of the day, asking someone to take a penalty who hasn’t touched the ball, is a recipe for disaster, and Saka had never taken a penalty. Not one. Basing it off the training ground is almost laughable.
Its a difficult situation for Southgate, as he quite possibly would have been blamed either way, but he certainly could’ve handled the situation better.

Of course they’re skilled and used to high pressure games, but this is the most pressure these players have ever been under. Sure, there’s cup finals, champion’s league etc, but this is different, when you’ve got an entire nation, believing they’re 55 years overdue for silverware.
Also, it’s only natural the players would study every move each other – that’s their job – but at the end of they day, someone has to come out on top eventually.
Completely agree that the game should be addressed as a whole, and that Italy probably were deserving winners, but when it comes down to penalties it doesn’t matter what’s happened in the previous 120 minutes. Southgate took a gamble, using a 19 year old and 2 players brought on at the death, and he’s paid the price for that.
Can we really blame England for trying to hold out for the 1-0 after scoring? It’s the natural response and frankly the Italians probably would’ve done the same thing. I’d be highly concerned if Mancini’s “Plan B” was Bonucci scoring from a corner scramble – hardly a reliable source to depend on.

Agreed penalties are a silly way of deciding it. A replay is an interesting option, although perhaps it may take away from the great spectacle that is the final.

You raise a good point about being tired after the 120, and maybe its a just matter of introducing the subs earlier on, however I just feel especially for players like Sancho and Rashford it must be unbearable pressure, when their only contribution relies on one kick. At least those players who played the full match have the “excuse” that they were tired, and had 120 minutes in which they could contribute.

What I also found interesting, is both Kane and Maguire were very confident in “burying” them, compared to the very timid attempts of the other three. Maybe a coincidence, but nonetheless an interesting thing to note.

Stats woulds suggest it is a disadvantage coming off the bench, and personally I just find it remarkable Southgate could blatantly ignore such one-sided data, for stuff he saw on a training ground.

I really wish they’d start getting more strict with the diving! It’s so frustrating to watch.

Yeah its really important that they’re ruthless in their decisions with bringing in the new young players. It’s simply just unrealistic to continue to rely on those ageing defenders, as you’ve mentioned.

I agree KDB, Hazard and Lukaku will still play in the next couple of tournaments, but just question if they’ll be as impactful as they have been in the last 3-4 years. I can certainly see why you think they’ll not fall away soon, but I also think a lot will depend on how those young players you’ve mentioned progress in the next couple years. Doko looks the goods atm though.

Will certainly be interesting to see his approach

It will be an interesting few years ahead for Belgium, and I think if Martinez leaves it would almost certainly mark the end of the road for the current defenders.

I agree they’ll still cause trouble for a few teams – just find it hard to see them beating the likes of Brazil, Italy, France etc on a consistent basis. 2018 was their best crack and if they’d managed to beat France in that semi they may well have won the whole thing.

Having said that, it will be interesting to see the progression of bornauw & vanuesden between now and 2022, with some tough calls needing to be made regarding Vertonghen and Vermaelen (and possibly Alderweireld although he may have one more tournament left in him) if they’re serious about competing in Qatar.

Thanks for the comment Ian. Completely agree having that depth is crucial – something Belgium just didn’t have. It’s a shame as on their day they could beat anyone, but consistency is key in tournaments. It would have been interesting to see the recent Belgium v Italy game had Eden Hazard been like his Chelsea days, a real difference maker – but we’ll never know for sure.