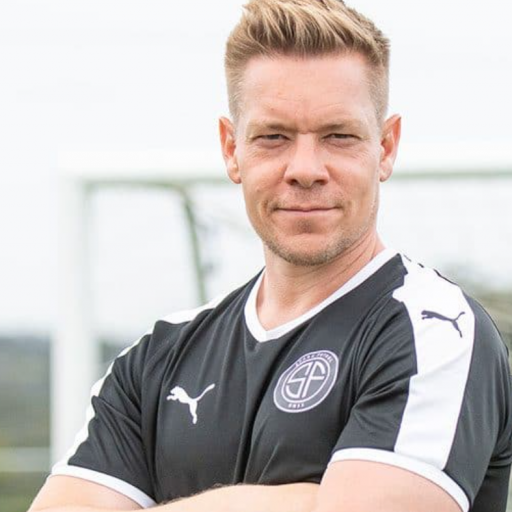 Former elite footballer who came through the same youth system as Australia’s ‘golden generation’ of football where he was part of the Soccer NSW elite development system in the 90’s before being selected to join the Australian Joeys U17s shadow squad in preparation for the 1999 Youth World Cup, a tournament Australia went all the way to the final only to fall to Brazil at the final hurdle. From there Cam went on to spend 3 years in the old National League set up. Playing for Sydney Olympic, Northern Spirit and Newcastle United in the National Youth League before being introduced to the 1st Grade set up at both Northern Spirit and Newcastle United. During this time Cam was also identified and asked to trial in the UK at some of England biggest clubs including Aston Villa, Newcastle United, and Crystal Palace before ultimately playing for Stoke Citys Reserves in 2003 whilst training fulltime with the 1st team squad on a daily basis under seasoned English Premier League Manager, Tony Pulis. Cam then returned home to Australia to play in the revamped NSW Premier League in 2004/05 - the highest level of football in the country at the time before the A-League launched. He then spent the next decade playing professionally on a part time basis in what’s now titled the National Premier League for the likes of Rockdale City Suns, West Sydney, Berries, Manly United and APIA Leichhardt - whom he captained. Since retiring from the professional game, Cam has spent a significant amount of time coaching junior footballers around the country - and even for a short period in Brazil. Encouraging them and inspiring them to love the game and be the best they can be. He has also used this time to acquire his AFC/ FFA C and B Licenses. Along with also working with local Association and NPL clubs in Technical Director, Technical Advisor and Head Coach capacities. With a deep desire to make a difference in the game, it was a ‘leap of faith’ in 2017 that saw Cam jump ‘full-time’ into football youth development. Firstly, acquiring the franchise for a globally recognised skills program . Before then taking his 3+ decades of footballing knowledge and experience to create Spark Futbol. A market-leading methodology and approach which focuses on the individual and their holistic development. As footballers and as people.

Have England just ushered in a new era of football? Or, at the very least, a whole new tactical approach to the game? I’m…

Love it JB! I get what you’re saying. Perhaps this is a different topic to that of the ‘false 6’. But I see the relevance.
In any case, what I’m seeing England do with their 6s (in controlled possession) is something I haven’t seen before in modern football. So perhaps another piece of evolution to add to the history you have detailed. And respect for that btw mate. Your knowledge of football history is definitely respected by this pundit!

Yes, perhaps, the difference here being the DMs aren’t (or rarely) looking to collect the ball in the middle third to advance the game forward. As they are not part of the desired ‘horse shoe’ ball movement.

Interesting thoughts JB! Slightly different topic to what I was commentating on with the 6’s – or if you don’t like the ‘number reference’ (only used for simplicity of reference being common modern coaching language) it’s referring to the role of the Defensive / Deep lying midfielders who would traditionally look to collect the ball off the back four facing forward to advance the game forward – being non existent when in controlled possession.
Waz threw in the over lapping centre half. And role of the centre half’s. But it’s not really relevant to the ‘false 6’ concept.
Love your passion for the history of football though! Especially the sweeper (or the libero) one of my favourite tactical roles in the history of the game!
This one, however, was all about the ball movement of the team and the players roles in that relevant to their position. In England’s case, the 6s not really being part of it, outside of bouncing balls backward or sideways to keep the momentum of the desired ball movement.

Great question Dezzy! Numbers in football definitely aren’t as definitive as rugby. But there are used as a positional indicator, especially for coaches.
It runs in numerical order out of the back. The 6 is then then first player / position named in midfield as the most defensive. If a team decides to play with 2x 6s it simply means they are playing with 2x defensive midfielders.

Agreed. Definite similarities in thinking here. For sure. The specific difference with the ‘false 6’ being that they start in a position. Then disappear from that position when on the ball. Or at least disappear from providing the usual movement and linkages to play that a normal 6 would. Just like a ‘false 9’. As opposed to an overlapping full back who looks to take advantage of the space when the opportunity presents itself and then makes unconventional actions to create overloads. In this case, there is very little decision making needed by the 6s. They simply know they are not part of the attacking build up when in controlled possession. Unless they drop into the backline. Or a rare opportunity and bit of space presents itself.