If the inaugural World Cup was held at the commencement of a worldwide economic depression, the subsequent edition came along in the middle of an ongoing economic malaise, with the added socio-political development of dictatorial governments in a number of European countries. 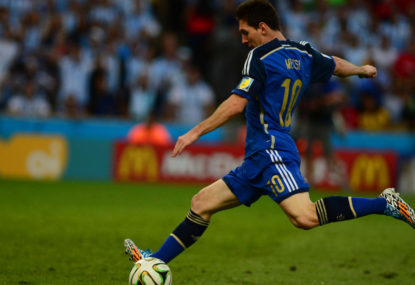 Under normal circumstances, Hellas would be a shoe in for expansion

Lee
that is extremely unpatriotic of you.

The World Cup is the positive story Australian football needs

Part of the uncertainty lies with the FFA who left it ambiguous when they announced their broadcast deal as to whether they could still sell the online rights.

Similarly, they left it ambiguous as to whether they were seeing any extra money from Fox giving One a game per round – it’s now clear that Fox held that right to onsell the game to FTA within the existing deal.

But nothing to see here, according to Waz and others, it’s perfectly normal for players to turn out for 70% of the clubs in the one comp.

Nothing unusual about that at all.

I’m sure it has zero effect on the credibility and popularity of the A-League.

If you have a favourite player, you can watch him club-hop on the A-League Merry-go-round.

It’s a tough gig, but as long as the demand exists for my erudite comments, I am at the service of my beloved readers.

This quote from the 442 article might answer your question about how much the FFA gets from it:

IN other words, similar to One getting the FTA rights via Foxsports, I’d say the FFA is not receiving one red cent from it.

no, you haven’t proven anything.

As I said, there are loads of players in the A-League who have played for 50% of the clubs, in some cases, even more.

Liam Reddy has played for 70% of all A-League clubs.

No one has come up with that same statistic for any competition anywhere in the world.

Therefore, in this regard, the A-League is definitely unique, and this is precisely what Evan is talking about when he says “merry-go-round”, i.e. players of moderate ability circulating amongst the A-League clubs, you know, like a merry-go-round.

This is a very good development for the A-League.

I repeat, Evan raised the issue of a merry go round.

Some of you tried to argue that there’s not such thing in the A-League.

I’ve tried to explain the existence of the merry go round from two perspectives:
1. players turning out for more than half the clubs in the A-League (or more); and
2. AU losing nine of its starting XI within 18 months of winning the championship in 2016.

I’m discussing the article, I’m discussing one of the issues raised by Evan – I”m not here to make recommendations about anything else.

AD
precisely, you’d prefer some of your favourites to stay on, perhaps more than two seasons.

But as Evan points out, there’s a merry go round in the A-League where over the space of a few seasons, complete lists are turned over.

Rather than arguing about whether there really is a merry go round, the discussion should be about what that means for the A-League.

Evan refers to the player merry go round in the A-League.

What do you think he means by that? I’ve given two ways of looking at it:

1. a large number of players who have turned out for half of all the A-League clubs (or more than half).

So, now that we have established that there does appear to be a bit of a merry-go-round in the A-League, to your direct question: is that a problem?

Well, like Evan, some of us don’t like it, but looking at it more broadly, can it have an effect on the popularity of the A-League? If within the space of 18 months, there’s hardly any player turning out for you team that delivered a championship, can that affect the loyalty a fan might feel for a club? Some might say no, others might say maybe.

I’m not sure, but I would not be as dismissive as many are being on here.

Even the great Man Utd sides under Ferguson had five or six players who played a decade or more with the club.

But in the A-League, you struggle to find one player which has stayed with the one club for ten years, let alone multiple players (I could think of Leigh Broxham currently).

Maybe that’s the case in the AFL as well, I don’lt know, only you amongst us can answer that question.

I stress again, I didn’t raise the issue, Evan mentioned it in his article, and I quote:

But there seem to be a raft of young players up and leaving too, jumping turbulently from club to club. ”

There appears to be only one poster presently discussing the actual article, while the rest appear to be more content on indulging in ad hominems.

As I’ve said before, the issue Evan raises in this regard is one worth discussing, whether you agree or not (it’s a discussion board, remember?)

Evan wrote: I disliked: The player merry-go-round spins on

I agree with him on this point.

As mentioned above a few times, it’s unlikely there is any other comp in the world where so many players have turned out for half the clubs (in the case of Liam Reddy, he has kept for 7 clubs, or 70% of all A-League clubs).

That’s one measure, and here’s one other.

A few posters wanted me to look at the AFL. I don’t have the familiarity with the AFL that Adelaide Docker does, but I”m aware that following its drought breaking premiership in 2016, the Bulldogs lost one of its premierhsip team to the Dockers, Hamling. That’s one player of 22.

Now let’s have a look at Adelaide United, winning the double and its first championship in 2015-16.

Within two years, nine of it’s starting XI was gone. That’s nine out of eleven….gone.

And here they are:

Now there might be good reasons for all those moves, more lucrative contracts, etc – but is it a problem for the A-League when a championship club can turnover nearly all of its starting XI in the space of two seasons?

It seems a reasonable enough question to ask.

Are you telling me that there are AFL players who have played for half the teams in the comp?

I doubt you’d even find an example of one single player who has played for one third of the teams in the comp.

In the A-League, we can cite Liam Reddy who has played for 7 A-League clubs, that’s 70% of the comp!

Anyone who thinks this is normal needs to think again.

All examples you throw up underscore the issue Evan has raised: the merry-go-round WITHIN the A-League.

Players playing with half the clubs of the one league (or more in a few cases).

None of you have come up with an example of any player anywhere else in the world where he has played for half the clubs of the one league (I’m sure there’s a tin-pot league out there where you’ll find an example, but that’s kinda the point, isn’t it?)

so even with your very best examples they have been at two A-League clubs.

As I said, only in the A-League do you find loads of players who have played for half the clubs in the comp.

Evan raises it as an issue, and rightly so.

Player recycling is certainly a philsophical question, but there is little doubt amongst those who really understand world football, that in the A-League it’s at the very extreme end of what happens.

In any event, Evan is the one who raised it (with good reason IMHO).

He mentions NTS (has played with four of 10 clubs).

He mentions Liam Reddy (has played with seven of 10 clubs).

Is it a problem? Well, the bulk of any championship winning team will have over half of its players at other clubs within two years. Given, there are only 10 teams in the A-League, to see this constant merry-go-round within the same league does look a little bit B-grade.

Let’s look at it another way, at some of the more celebrated players in the world:

then we go to the A-League
Leigh Broxham – 11 years at the one A-League club
and that’s where it ends.

You reckon you’ll find someone having played for half the Serie A clubs?

It’s not a code issue, it’s an A-League issue.

I doubt you get the same propensity elsewhere of players having played for half the clubs in a league, and managing to do so within an 8 year period.

As one example amongst many, the Jets’ keeper in the grand final has played for no fewer than six A-League clubs.

I don’t like the player merry-go-round either, but this has existed from the very start.

It’s crazy that in a league only 13 seasons long, with only 10 clubs, that there are so many players who have played for half of them.

You can throw Uruguay into the mix.

Yes, there appears to be a clear correlation between size of population/economy and success at the World Cup, although first and foremost you need to be a football nation,

About once every six months, the Roar eds do an online survey of their members, and ask them to vote for posters who should be elevated to Guru status.

And rightly so IMHO.

just as we should not mark the A-League on the TV ratings, or lack thereof, we should not judge the quality of La Coupe du monde series on the fact that nobody is reading it.