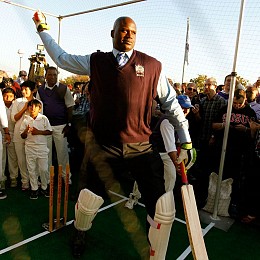 josh hasn't published any posts yet

Why were the 80’s so terrible for cricket? Might be my limited knowledge, but everyone bar the West indies seemed to running around fielding “B” sides really.

And I liked the Bad Boy Pistons, this added to the reputation and also created the Jordan that finally got to the finals. In alternate history they shake hands; does it change things? Probably not, because as is my main point, Jordan would have used the loss a factor or some other slight to “rise to the challenge”. There’s point in the hero’s journey where he conquered the beast. Jordan has this thing where there is always another beast.

MJ taking a stance on sportsman is really something. “I’m annoyed they didn’t shake hands”, but is also happy to punch team mates, take their money playing poker, and laud it over them in a shooting contest?

I was astounded that, here’s a guy who is clearly the best layer in the league at the time, needs motivations, imagined or real, to play at his best. It’s a different psyche. Does he have a therapist?

MJ taking a stance on sportsman is really something else. Being annoyed they didn’t shake hands, but is also happy to punch team mates, take their money playing poker, and laud it over them in a shooting contest?
I was astounded that, here’s a guy who is clearly the best layer in the league at the time, needs motivations, imagined or real, to play at his best. It’s a different psyche.

Yeah its crazy, in a league that celebrates coaches, e.g. Pat Reilly, Red Auerbach. No one has matched Phil’s record and it’s all kinda of dismissed as a bit of a one trick pony.
With 13 in total he has to be the leading person for most NBA championships! That’s not a bad trick.

This is your takeaway from the series?

If anyone is sad, I’d go with Jordan. Doesn’t seem to have any real connection to former teammates or peers, which is kinda understandable on their behalf.

It’s weird, Phil’s legacy gets tarnished for his ending at the Knicks, whereas Jordan’s fizzle at the Wizards is kinda glossed over, and people just remember the first 13 seasons, but really the last 7.

Phil’s record is incredible, winning 9 times in 12 years and all of those wins hat tricks is no mean feat.

That was an interesting read.
But worth noting aussie rules in Queensland wasn’t unknown in 50’s. The QAFL had been in existence from 1903 and Queensland had fielded teams in the old interstate carnivals.

Conquering frontiers: The untold story of the VFL's first foray into Queensland

I think players could have gone from ball 1 in any era. They just didn’t need too. If the ball in the hitting zone, go for it.

The build your way into an innings is usually way to get used to the conditions.

Is seeing the ball a superpower?

M.Waugh off his pads is the creme de la creme of batting.

I did think with a bit more research, there would be some players with very good FC records that would warrant a spot.

TBH I kinda stopped looking when I got to S.Law, but realised i needed a few more bats. Then Phillips and Moss filled that gap.

On that single test performance Mick Malone probably should get a spot. But at who’s expense?

You’ve kind of beaten me. In the light of people making best of lists. I was thinking could you make an Australian best of the 1 test players. Turns out you can.

Of 458 Australian test players, the most common number of tests played is one! With 70 players representing Australian just the once. Probably not unsurprisingly many of these are pre-World War 1. And this was the next challenge, how do you rank players from different with limited test match stats? And sorting out the issues of comparing era equally, i.e. an FC average of 20 odd in 1890 was probably decent enough, so is that better than someone in the 1980’s average 35? Dunno.

Another issue is the list is dominated by bowlers on the most part.

But siding with recency bias, probably the best XI of 1 test players are:

Seeing double: Who are the best multi-sport athletes?

I think his FC gets helped by his Test and his time with Hampshire. For Victoria his Average is 34.7 with a strike rate of 73.6

I’d imagine if you could simulate it, there’d be these not so obvious teams pop up, like a Team G with wins.

What’d be interesting, is Warne’s test average compared to his domestic average, which I’ve always thought wasn’t that good (was it he just bowled stock deliveries and dialed it down a bit at home?).

Team G over Team P and Team C is a tough read. I favored P and C because of their batting. But you need to take 20 wickets don’t you…
Good read, would be an interesting series if you could simulate it.

Always felt like Manou’s trip to England was like a modern benefit season. Not sure why he was selected, but being from Queensland I’m going with bias.

It’s all alorithims based on compiled data like CricViz do, cricket is game with enough sample points that you could simulate matches pretty well.

This might be a case against pure stats. Warne had at his prime an almost stranglehold over England. From the Gatting ball to even the 05 series where he was probably Australia’s best player.

As great as Laker was as a bowler, I’m not sure he had the same psychological advantage as Warne did.

I hope this is just Warne era mind games.

It’s the same ball with a different name.

The same really, both his average and strike rate just steadily climbed his whole career, never really plateaued. Lowest point (bowling average) was 16 (4th match in) and then climbed to 28.4.

Then comparing to Miller, while his batting (averaged) decreased, his bowling average was pretty consistent. As soon as he topped 20, his 9th match in, it never went above 24 for the rest of his career.