The greatest key forward combinations of the modern era

Richmond fans are salivating at the prospect of watching Jack Riewoldt and Tom Lynch playing together, while West Coast supporters ponder how destructive Josh Kennedy and Jack Darling would be if they stayed injury free.

The greatest key forward combinations of the modern era

Why the stats predict a Richmond premiership next year

Sitting at the pub and listening to the conversations around who will win the flag in 2019 – and ignoring the biases – three common choices stand out.

Why the stats predict a Richmond premiership next year

Here are my early picks for the top eight in the 2019 AFL season. 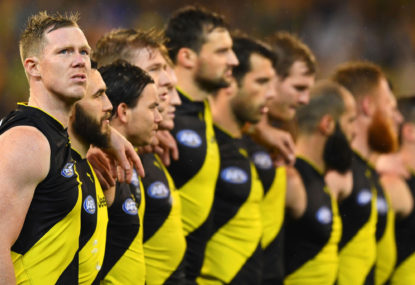 How to avoid repeating the Lukosius Cup

The Round 16 bottom-of-the-ladder clash between Carlton and Brisbane was dubbed the ‘Lukosius Cup’ as it was supposedly a race to the bottom – and to the number one draft pick, Jack Lukosius. 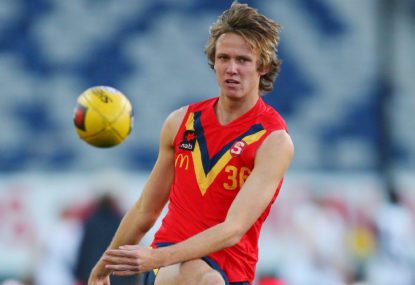 How to avoid repeating the Lukosius Cup

Australia’s obsession with pace started even before Lehmann I remember in the 2011 world up when Nielsen was the coach Australian played a pace attack that had Tait, Lee, and Johnson in the same XI. Three bowlers int the same attack bowling 150 km/hr +. Looked great on paper but didn’t achieve the desired result.

The hook shot is a shot that rarely gets played anymore. It is seen as a high risk shot. From a spectator’s view there was nothing more exciting than watching a short batsman hook a fast bowler for a six.

Lara’s knock at Bridgetown was the greatest innings I’ve ever seen. An Australian batting lineup that included the Waugh brothers, Ponting, and Langer were dismissed for 146. The very next innings Lara comes out and carves out 153 not out against an attack that comprised of Mcgrath, Gillespie, Warne, and Macgill. Hard to dispute the greatness of this innings. Laxman’s innings was impressive but worth noting that it was done in partnership with Dravid. Also the Australian bowling in that innings disintegrated into a tired rabble under the searing heat of Kolkata. Waugh himself admitted that he should not have enforced the follow on given the physical state of the bowlers.

Not a big fan of starc but one ball that Starc bowls better than any other bowler is the late swinging yorker. The inability of the fast bowlers to nail the yorker against leach might tempt selectors to for starc.

It appears that that the poms have been busy backing their team to win the next test match. If the odds are anything to go by England will be starting as warm favorites for the next test match. Bit hard to fathom since Smith coming back far outweighs Anderson’s inclusion. At 37 it is hard to think that Anderson could still have a major impact with the ball. As impressive as Stokes’s innings was his overall test average of 36 over 55 tests indicates he is due for a run of low scores.

Australia need not panic, the Ashes are there to be won

Why the AFL could benefit from wildcard finalists

On first glance the squad looks imbalanced. All the defenders are of the same mould. Tall intercept marking defenders. No small sized speedy defenders who can negate a cyril rioli type of forward. Most of the midfielders are inside midfielders who are ball magnets who go hunting for the ball. No genuine wing man in the mould of a peter matera.

What if Boyd had stayed at GWS and not gone to the bulldogs.

What if Lance Franklin had signed with GWS?

England will more than likely still make the sem-finals because they are playing an India and New Zealand side that has already qualified for the semi-finals. Wouldn’t surprise me if the likes of Bumrah and Boult were rested. Pakistan is the unlucky side. Having their game against a weak Sri Lanka side washed out.

Hi Gurlivleen
Any chance I can get your email address. I am curious to learn how to beat the bookies. Given your experience I thought I might be able to run a few questions past you.

Thanks James. I was just using statsguru.

Teams are getting better at reading Mujeeb and Rashid Khan’s variations. Ireland recently beat them. Mystery spinners only stay mysterious for so long. They’ll probably win a couple of games. By expectations I meant that of a neutral cricket fan like myself.

Hey Gurliveen
Not disputing the soundness or accuracy of your calculation but your assumptions appear to be too heavily weighted in favour of the top 6 sides. Currently sportsbet have Windies at 15-1 to win the world cup, implied proabability of 6.7%. Hence not far fetched to say they have at least 10% of making the semis.

To confirm your point 3 out of the 11 cricket world cups have been won by teams that would have been ranked in the bottom half going into the tournament. India(’83), Australia (’87) and Sri Lanka (’96).

I tend to disagree with your comment on the Windies. They used to be a team of individuals playing million dollar shots but Jason Holder has finally go this team gelling together quite nicely. Their bowling is their weakness and it will eventually hurt them. The probability of them making the semis would have to be at least 10%.

Ryan I tend to agree with you that Adelaide will be a force this year. I can’t help but feel that the so called “camp” was the cause of their downfall last season. I wish someone would write a book or make a documentary on exactly what went on in this camp and the aftermath.

If the curators prepare roads then West Indies could be the dark horse. They tied the series against England without Evin Lewis and Andre Russell. Don’t think they have the discipline to go all the way but certainly will be entertaining to watch.

I will sit on the fence when it comes to Handscomb. Hard to make any sense of his form. Looked good in the one-dayers against India but his shot-making in the BBL semi final and final was………well let’s just say he either temporarily lost his brain or he doesn’t give a hoots about the melbourne stars or the BBL. For Australia’s sake I hope it is the latter.

Peter Handscomb can play a key role in T20s against India

Tend to agree with you that there is a flaw here. During the last 2 years Jadeja has played in just 15 out of the 25 tests that India played and averaged 23. Lyon played in all 23 of the test matches that Australia played and averaged 28. India tend to use Jadeja selectively on pitches that will suit him whereas Lyon is expected to toil away on all pitches. Bit like comparing a fast bowler who only plays on green pitches vs one that plays on all wickets.

oops.. sorry I only realised he’s been playing for 12 months after I typed my comment

Surprised Bumrah is not in the top 5 considering what he did in Australia.

The way he walks around holding his bat reminds me of Chris Hemsworth holding his hammer in Thor.

I agree with your thinking but might be reluctant to play two spinners against the sub-continental sides. Definitely worth looking at against the Poms and the south africans.