I’m not the biggest stadium nerd around, although I do know what a c-value is and I can occasionally be found over at skyscrapercity.com looking in the discussion threads there at pictures of stadium building sites. 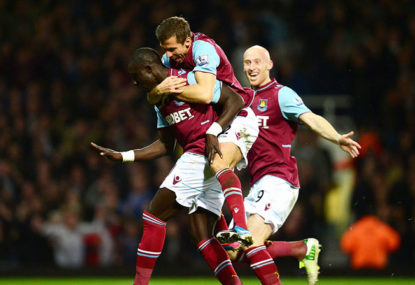 An open letter to stadium designers

The announcement about a complete rebuild of Parramatta Stadium has me dreaming dreams. For a long-time cynic like me, that’s quite an admission. 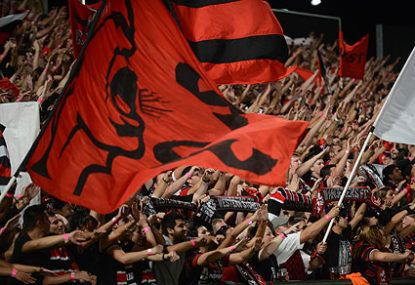 An open letter to stadium designers

Not only that but there was, aside from 2 fl@res, 2 evictions and 1 arrest and no hint of any trouble anywhere.

I’d ask ac where specifically he sees that the crowd is getting out of hand or why a crowd having a “crowd mentality” is something to worry about or a new development only apparently seen at wanderers matches.

A big crowd is always going to be a bit intoxicating.
Football matches have a different atmosphere to other sports. The reasons are many and varied. But we have seen very little actual signs that there is anything to be feared about it, despite the best efforts of many.

I didn’t see it myself but I read numerous reports of zealous security not allowing in packets of lollies and chips or water bottles. If they can do that….

Plus at the RBB entry there were pat downs (as there have been for years now).

(I had a longer post but it seems to have disappeared).

Appreciate the effort Cameron. I know we all just want to be able to not keep having this conversation.
I don’t believe there is a quick fix or a perfect solution which would get rid of the problem. Other than, what was practiced at Parramatta (after many teething issues). The home end was members only. The RBB worked with security and police, and had an agreement with how it would go down if there were any fl@res. There were cameras and security to identify the culprits and most of the time – and incidents were few and far between – they were caught and banned.
The difficulty is with away matches of course – and ANZ on the weekend was effectively an away match, with an open access RBB and tickets on general sale at different times. Here, it needs to be that the authorities work with the club to learn what works and how to manage it. I’m pretty sure at least one person was caught on the weekend. They’ll get their ban and maybe be charged.

I’d also say, I’ve read the suggestion of making fl@res legal in the bays before. Aside from the legal quandary that might create, I think you’d find that those who light fl@res would not want that (on second thought, maybe that might be a good move then?).

The reason for this is that one of the appeals of a home end like the RBB is that it is it’s own organic beast. It’s not an organisation like I think some people perceive it to be. It’s a collective of individuals. The direction of it comes not from some kind of recognisable system but from people who are willing to invest their considerable time and energy into volunteering for all sorts of things that need doing within it and that is open to anyone who is willing and committed. It’s a broad church of very different opinions. Crucially though, the collective is not controlled really by anyone – least of all the club, or the police, or security, or whatever. It is it’s own entity. It’s not an official supporters club like you see in other codes with benefits (and funding) bestowed from above. Yes there are boundaries… you might argue that it wouldn’t exist without the official side of things… that’s true, but I think a lot of people would view their membership which allows access to the ground is almost separate to their more unofficial membership of the RBB. All of that.. that autonomy – is in some ways a rare thing these days. What I’m getting at I guess is that strictures imposed from above – you can have x fl@res, you can use a fl@re at this time, you can do this at this time, but not now, only when we say, etc etc – would be a bit antithetical to the whole thing, to the appeal of it for many.

That is all aside from the fact of course that many of those who want to rip a fl@re are doing so because they are simply a {insert rude word] who want to look hard and actually have little interest in anything that I’ve described above. And are clearly more than prepared to take the risk of a ban and a charge. I would argue that there is very little that will deter those people – least of all, points deductions – and if they were given the right to light them, the appeal would diminish.

Let the police and security do their job?
This is what happened at parramatta, and flare use was at zero at that ground.
I’m pretty certain they nabbed this one too.

@matt, in response to nemesis

As I said above, FFA didn’t impose the deduction specifically for flare use. It was for major incidents. Gallop said this wasn’t one.

I’m not saying it’s not problematic – especially as there was never any clear definition – and like I’ve also said their reactive adjustment is telling. When the tail wags the dog, that’s when there’s a punishment.

But it’s not just about flares and flares alone.

If it were, the roar would have been given a suspended points deduction given what waz outlined above. I’m assuming you are also gob smacked by the FFAs lack of action there.

Hmmm.
i suggest you have a look at clubs who have had fl@res – that would be most of them – and look at which ones have had any punishment (that would be the ones you identify as protected species).

Maybe a perusal of the banned lists might also be in order. Which clubs have been hit more? No hints needed.

I agree the FFA should actually hold a position. Their flip flopping does no one any favours. The punishment as prescribed was for a “major incident” (the game was stopped); they initially came out to say that this incident – two by my count, one immediately dealt with – didn’t qualify as a major incident. I would have had no problems had they straight up imposed the deduction as it happens. But they didn’t and instead, later, as a knee jerk reaction to a little bit of media from predictable quarters – and close friend of the chief (why does that ring a bell….) , we get a stupid half measure that does nothing.

What can the club do though?
At least one of the culprits was identified and will no doubt be banned as a minimum…. Isn’t that enough?

As I’ve said forever, fl@res are bad only if they hit the media apparently. (And obviously Ray, okay when celebrating a rugby league premiership).

And yes. P@thetic also from the fl@re rippers – at least one of whom was a first timer – and the total 1diots with their selfies who don’t get any of it.

So glad we went to ANZ….

How did it happen?
1 arrest, 2 evictions, the FFA was happy, their suspended sentence was about major incidents – not necessarily safety devices – so they decided this was minor, the press largely ignored it.

When a football hating shock jock with an axe to grind had a tipoff.

Next thing, oh dear, must appease, can’t go back on it being minor, and here we are….

Even started by an english guy that one.

They are fairly unique though. I mean, i can’t stand them myself, but they offer a bit of character.

But my question was more about, what would it look like, not necessarily what is there.

I was just saying, i enjoyed the article and didn’t mean to sound too grumpy, i’m just really interested in all this sort of stuff.

As I said, to me the RBB is reflective of the identity of the community it represents, and in fact all of the more organised groups do that for their own communities too.

If we want to get down to it – looking for something that would reflect our overall identity more (bearing in mind this is pretty problematic as it is anyway) – the problem is that as a whole, Australian culture is pretty laid back, “she’ll be right mate”, has a problem with tall poppies, dislikes the idea of being told what to do (even if there’s actually plenty of compliance in practice). All of this, and more, combines to mean that we’re unlikely to develop something other than what we’ve got in general… like, what an australian crowd is like these days, actually is refective of our identity.

Anyway, rambling now, thanks again for the read!

Well, they’ve got you. Seems about right.

His contract was terminated after the close of the transfer window and that means he can’t sign up anywhere here.

The Australian patriotic league is that way pal.

Inshallah you will actually see an aleague game for yourself one day to find out what it’s actually like.

Some won't like it, but FFA ban procedure looks fair

They also go off on a pretty regular basis where I live. Several times a year for different things, Chinese New Year the latest, some I can’t account for, most I’m pretty sure with no permits.

Don’t kick em, we score them.
And sometimes, even better, we make them.

One of Australian sports top 20 moments I heard.

Ooh fascist militancy. That kind of thing would go down a treat with the general public here.

And they did this for booing you say? Well well.

Be patient mf. I’d be cautiously optimistic at this point.

They were asked to take part in a meeting to do with fan engagement.

They said, fine – once we’ve seen what’s happening with the appeals process, i. e. the pressing issue. The FFA had said this process they’ve decided on is non negotiable.