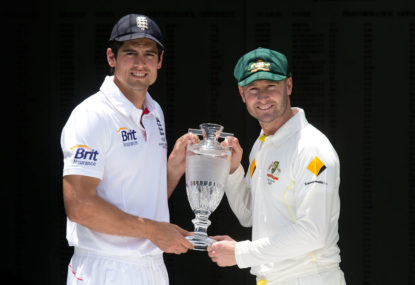 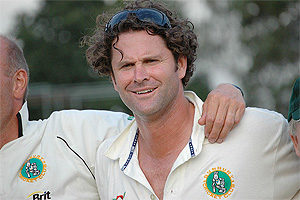 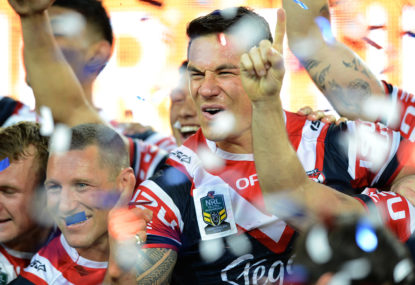 Rankins extra height could prove the difference at the WACA although if England are hesitant about playing a player on debut in such a big game they should go for Tremlett at least.

Cook needs five seamers to throw the ball to, if that means Stokes who did ok in the last game or play five seamers and bat prior at 6.

In reality if their top order doesn’t fire then they aren’t going to win anyway so there is no point relying on lower order runs.

Bat Prior at 6 and Broad at 7 and go after them with 5 seamers.

George North has to be ahead of Savea for mine

My international rugby team of 2013

They don’t make for pretty viewing do they Eddy lad?!

You’d think the way the guy struts around he was the second coming of Sir Donald!

Agree Watson and Johnson would have to fight for the title of biggest tosser.

Out of those three its only Pietersen and Johnson that can afford to walk around with egos.

What has Shane Watson done in test cricket?

I’ve watched both Bunce and Thorn but really that argument is irrelevant, just calling it as I see it.

If you are talking about me I never called them ‘whining babies’ or ‘muppets.’

I think you’ll find that I called Johnson a ‘tool’ which is an accurate description.

I called Watson and Haddin ‘clowns’ again this is quite accurate.

Then I called the lot of them ‘wombats.’

Don’t get me wrong I am a big fan of sledging, in fact I love it, I’ve done it myself.

But sledging is meant to be clever and funny.

Sledging someone after every ball means that the sledging becomes boring and repetitive and it loses its affect. It also makes the bowler look like an idiot.

That’s probably why Root was laughing.

The only sledging I have seen that was worse than Johnson’s was Tim Southee when he was getting smashed all over the park by South Africa, now that was just embarrassing.

Mundine announces fight but no opponent - Quade Cooper on undercard

I disagree Steven. I think it’s this aggressiveness that has been the downfall of England this series. Look at the dismissals both openers being caught at long leg when trying to save the game, it was madness. If more applies themselves like Root and Bell the Poms wouldn’t be down 2-0

Agree to disagree we must be hearing different things.

Look sorry mate thought you were just having a go like some of the others.

Thanks for the advice. I’m a keen reader of all sports biographies and have read dozens including McCaws which for the record wasn’t the best.

This comment is completely irrelevant I’m not sure it even warrants a response.

Root was the only good thing to come out of the test for England, he looks to be Englands future.

Johnson although he bowled really well he acted like a complete tool, thinking he needed to say something after every delivery is just a joke. Root must have seen it as a joke as well which is why he was smiling all the time.

That coupled with clowns such as Haddin and Watson constantly chirping rubbish after every ball is enough to drive anyone mad.

I’m all for sledging or a good send off when its funny and constructive but these guys are acting like complete wombats.

What Clarke said in the first test wasn’t sledging as it wasn’t clever at all, it was just out and out abuse.

Yeah it happens a lot in other sports and it happened with Rueben Thorne he was cut as captain and then went to the ’07 World Cup but he obviously has nowhere near the amount of mana as McCaw.

In the end it’s up to Richie and he has stated that he will walk away if he form or desire declines, so we will have to wait and see.

Great comment regarding Moyes being given the freedom to spend and the terrible current development pathways for British players. People forget that a main contributor to Fergies success was the class of ’92.

Completely agree Ben, the NZ rugby public get blinded and start calling everyone in the All Blacks ‘world class.’ Messam isn’t world class.

The ready made replacement pack does look bad but the only way to find out is to make them play and find out. I have never been a fan of Crockett so a new loosehead would need to be sourced.

I would put Luatua in over Messam in a heartbeat.

Next season is the time to cut out the deadwood such as Woodcock and Mealamu and broaden his squad ahead of 2015 otherwise it may be too late.

Thanks Eddy I agree with the depth at 10, you could also add Tom Taylor and Colin Slade to that list.

Marshall’s an interesting one. If he does prove to be a hit in rugby he will put pressure on the incumbents but I can’t see him surpassing them, especially as there is only 2 years until the World Cup. Even so it adds to our depth.

Interesting thoughts around Mealamu, I guess you are right they need to keep experience in the hooker position but will he still be playing at a high level in 2015? I suppose they need to make that decision now whether to blood new hookers such as Coltman, so they have enough experience come World Cup time or stick with the tried and true in Mealamu. They may keep him in the squad for the young hookers to learn from but what better way to learn what’s required for International Rugby than to actually play it? That’s how its worked for the previous 100 years.

I understand stripping McCaw of the captaincy would be controversial but if he’s not up to it, it has to be done. Sam Cane is a good young player but he’s always going to be compared to McCaw which is unfair. Savea is an interesting case you are right, can’t wait to see him in Super Rugby next year.

I agree with you that McCaw is still the first choice number 7 in the team by a margin, but he is waning and may not be the first choice come World Cup time so that is why I would give the captaincy to Read. I hope Richie proves me wrong though and if there’s one player that can it’s him.

Good comments about Moyesy he was given a hospital pass by Sir Alex, he was on a hiding to nothing. They should persevere with him, however in the cut throat world of Premier League football this probably won’t happen if these poor results continue. One thing going for Moyes is the involvement of Ferguson who no doubt will continue to pull strings to ensure Moyes keeps his job.

Rooney has had a reincarnation under Moyes and you’re right he should be given credit for this.

The mighty Everton look odds on for a Champions League place.

That’s incorrect Hore wanted to keep playing for anyone but no one wanted him not even the Highlanders but who really cares.

Yeah I guess we will find out in time about Woodcock and Mealamu.

Hore 2013=9 tests, started 7. Mealamu 2013=8 tests, started 3
Maybe they gave Keven a light workload because they knew Hore wouldn’t be around next year or Hore could have been playing better who knows.

Not a UFC fan but flicked on to watch Mark Hunt as it was free. I can honestly say its the best fight I have seen. After buying a handful of PPV boxing packages and feeling ripped off I may now turn to mma. Don’t listen to Buzz he’s an absolute clown. This is a really good response article.

Banana Bob in league most props come off after 20 mins anyway!

My Wallabies side to win the cross-code Great Britain match

Well Eddy they would certainly take care of England that’s for sure!

My Wallabies side to win the cross-code Great Britain match