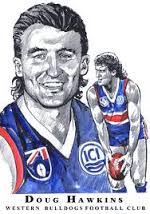 Kick a scintillating goal, salute the crowd with a roar of exultation, slow to a trot soaking up the adulation, puff the chest out, strut, elbow bent at the side, forefinger raised, head jiggling ever so slightly as if on a coiled spring with that deity look of ‘I know I’m good’. 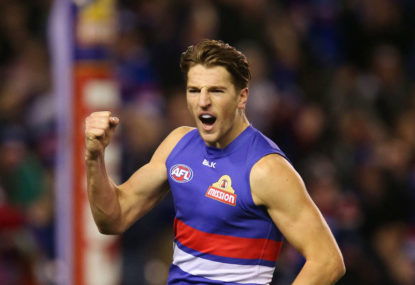 GWS played the Doggies back into form (3 weeks ago). But two winnable games in the next fortnight will show whether we’re a serious contender or not – if we lose either game against Carlton or Essendon then we are just pretenders this season (even with Dunkley, Naughton, Crozier and potentially Smith out).

Not much respect to the Doggies there Josh. Both sides were two wins a piece entering the round. Missing Dunkley, Naughton and Hunter, then losing Smith early, is four jets. So to win so authoritatively and in the attacking game style was an impressive team performance, especially with Bont beaten and Macrae quiet in the first half when the game was won. Team depth, energy, chemistry and commitment gives other teams cause to be nervous. Wood returning to the backline gives it a really good blend and balance of players with different strengths who are gelling beautifully. Keath is the missing ingredient and Crozier and Williams are both making big strides in becoming bona fide top quality, rebounding, tough defenders.

Calling the Swans out for blocking off the ball was laughably hypocritical and undermined his integrity – various footy analysts have been pointing out the Hawks under Clarko have been clinically blocking players off the ball themselves for a long time.

Birdman, Sterling’s article yesterday indicated the umps were adjudicating the rule correctly and that Clarko either wasn’t aware of how the rule is worded or was making his point poorly by inaccurately suggesting the umps weren’t adhering to the rules.

Haha, see Dr Disnick’s comments below – he says very similar comments to me. I understand you don’t like anybody critiquing a game style which delivered your club 3 flags and highlighting Clarko’s vexed credibility issue on this particular topic (without him sounding hollow and hypocritical), which you and he are so keen to discuss.

I guess that’s in the eye of the beholder. The Tiges put numbers behind the ball and don’t take many risks. Tiges and Hawk flags were both won without dominating contested posession (opposite of the Dogs), winning it primarily through turnovers from highly defensive team structures and keeping careful possession. The 2016 bulldogs side deployed a run’n’gun counter-attack style, constantly running in waves and daring to go through the middle of the ground – their ball movement was electric.

After watching on Footy Clas s ified l ast night all the examples of tackles not paid frees, I was with Clarko. But after reading this article, I’m with Sterling – who knew the rule said this? The rule doesn’t reward good tackling or ping blokes that try and break a tackle unsuccessfully, but the umpires are interpreting the rule the way it’s written. Clarko has always been a grumpy, petulant sook. And I rarely found the Hawk 3 Peat sides game style good to watch, or Richmond over last 3 years, other than individual brilliance from the likes of Cyril, Hodge, Dusty and Jack Riewoldt. Great article Sterling.

Cheers Macca. I rate Dusty as the best midfielder in the comp, because he kicks goals at critical times regularly when it counts. Bont, Cripps, Danger and Fyfe all lack this element. I rate Bont marginally ahead of Cripps purely because he is more creative, but I rate Bont and Cripps ahead of the other two because they do all the hard work, run both ways and don’t rely on teammates defending on their behalf. But not much difference between all four of them. Dusty is clearly ahead. Pendlebury, Sidebottom and Shuey should probably be in the conversation too. Neale, Coniglio, Gaff, Mitchell, Kennedy, Boak, Kelly, Macrae, Cotchin, are all great too but a fair way below these players. Thoughts?

I think they need more an Andrew Gaff or Josh Kelly type. Or maybe Jye Caldwell. Taranto would be handy too.

Yeah Martin is a great pickup – spewing we missed out on him. I’m surprised at how well Pittonet is going – I bet there are many clubs now regretting not going after him. Good on him.

Great victory by the Blues. But they desperately need more A and B grade depth in the midfield, where games are mostly won and lost, before they can regularly topple good sides. Cripps is top 6 midfielders in the comp and Walsh might join him one day, but outside of those two they really lack ammunition. Maybe they can prise one from GWS’ abundant list over the summer.

This sounds like a Don Freo comment, Pete. With respect, apart from Langdon those names belong in the VFL. Greenwood and Scharenburg would be depth players at most clubs and the other three are lucky to have a contract.

Jeremy Cameron didn’t get a kick against the Dogs (yet again). He seems to struggle whenever closely checked.

Collingwood’s back six are playing well, but I think the biggest reason for low opposition scores is the defensive pressure applied by Collingwood’s midfield and forwards on delivery into Collingwood’s backline. These days the whole side needs to work together feverishly to create pressure and turnovers. It only takes a couple of passengers to bring it all undone. If they put blokes like Cox and Treloar back in the side, the opposition will increase their scores.

Can you think of any examples where Bulldog players have acted like thugs? I’d have to cast my mind back a long, long way to remember thuggish behaviour from the Doggies camp, and I’m talking about under Terry Wallaces’ coaching 20 yeas ago. (There’s been recent injuries to opponents from honest bumps, such as Hannebery, Whitfield and Haynes, but none of these qualify as free kicks, let alone thuggish actions.)

Seven talking points from AFL Round 3

Oh yes Josh, the rivalry between Dogs and GWS is very real and dates back to around 2014. As a doggies supporter, it seems like two out of three games GWS have attacked the man, not the ball, and with the exception of last year’s final it has backfired on them. Incidents include Phil Davis punching Jack Redpath in the guts then Redpath retaliating by rag dolling him and getting suspended; Toby Green cowardly punching Caleb Daniel in the back of the head when marking (and suspended); Toby Green and Nathan Wilson using their feet horizontally to fend-off oncoming heads when taking marks in the 2016 preliminary final; Lachie Whitfield’s coward round-arm punch on the side of Macrae’s head from behind in the 2016 preliminary final; Toby Green’s karate-kick to the head of Dahlhaus in 2018 when receiving a handball; Bontempelli’s innocuous ‘football bump’ on Haynes in 2019 which had the misfortunate, rare consequence of a broken larynx; Himmelberg punching Bont in the guts behind play unexpectedly in the 2019 final; Toby Green sitting on Bont’s back, scratching his eyes, pulling his hair, thumping his head his head back and forth in the 2019 final; and now Naughton concussing Whitfield in another genuine ‘football bump’ in 2020. This misconception that you’re tough when you whack people from behind is a blight on GWS’s culture and Cameron’s leadership. It’s only worked for them once, and that was largely because the Doggies young side lacked physical presence in that particular game. I’m proud of the way my team has remained focused on playing football throughout. The rest of the time the Giants have tried these thuggish shenanigans, they just look like foolish, unsporting, sniping, coward grubs. And yet so many of their players are probably good people following bad leadership in a poor club culture. Thanks for kick-starting our season.

Seven talking points from AFL Round 3

True. All very good players, especially Grub. But they still had Coniglio, Ward, Hopper, De Boer and Wilson running through their midfield, plus up-and-comers high draft picks Jye Caldwell and Jackson Hately. They bat deep. Which begs the question again: Why hasn’t this list won a premiership yet? They are mentally fickle. And Leon Cameron’s gamesmanship of sending Haynes to the coin toss tells you why their culture is so poor. He wants the public to think GWS are justified in acting the way they have in the past, when in fact (1) nobody can every justify thuggish, sniping behaviour, and (2) he should be focused on the future and how to be a better team.

Personally I thought Haynes coin toss was revealing of Leon Cameron’s character. The Giants continually try to create a narrative that Bont’s innocuous bump on Haynes was malicious, as a BS trumped-up excuse for the way they constantly snipe at Bulldog players from behind off the ball. Their repeated thuggish behaviour is pathetic and and the culture is driven by Cameron. They mistakenly think they are tough when attacking other players unexpectedly or off the ball from behind, yet they are historically constantly found missing in mental toughness when teams come hard at them.

Our best forward line is an intriguing question – I agree with Sterling that ‘balance’ is the key, but I think Bruce (backup ruck) and Naughton (swingman) are both flexible enough to provide value elsewhere on any given day. I’m not convinced Lloyd is in our Best 22 (he’s a good opportunist but needs to add forward line defensive pressure to his arsenal, to help balance the forward line) and Dickson has only played a handful of good games in the last three seasons (mostly due to injury and indifferent form), so I don’t think he’s in our Best 22 either. Toby McLean should be a lock. Rotating mids like Bailey Smith, Lipinski, Libber and Wallis will take another two spots in the forward line and the remaining spots are up for grabs between Lloyd, Dale, West and Weightman.

EJ, Teddy, Mr Football was number one, then Grant, Hawkins, Johnson – although I can understand people voting Johnson ahead of Pumping Dougie Hawkins. Scotty West won 7 B&Fs and consistently played well in finals, so he has to be next. The Bulldogs have had many Brownlow Medallists who deserve consideration for the top 10: Dempsey, Templeton, Peter Box to name few. Plus our full forward from the 1954 premiership, Jack Collins, was supposedly a gun. Bob Murphy and Rohan Smith were class acts over a long period of time and I dare say Bont will challenge for the top 3 by the time he finishes his career.

In some ways I agree – but he played a pivotal role in the GF and was useful in the PF. He cost the club about $4m and was the difference in winning the flag. In hindsight, if your club handed over a cheque for $4m to a player for about 40 games (I’m guessing the number) and it made the difference between winning a flag and not, I think most club’s would choose to pay it. Especially when we’d only experienced the joy of one flag in a century! I don’t think any supporters or any of his premiership teammates or club officials would regret the decision now. Great story and good luck to the fella.

The 2014 trade period revisited: The verdicts on Beams, Boyd and more