For a bit of fun and to create some discussion, I have put together a list of 23 recent players who were blessed with the opportunity of donning the candy stripes of the greatest district rugby club in the combined Sutherland and St George area, the Southern Districts Rebels. 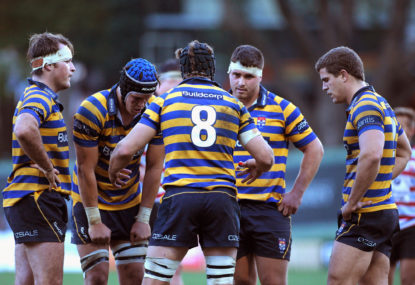 No doubt all would do well, I was just going off how the roles adapt to league. Webber would be a good hooker and a league 7 is the organiser, but no doubt Webber could play both. I also see DMac as a Billy Slater type player.

The ABs had Carter, Nonu, McCaw, Kaino and Reid running around back then.
Similar drop off.

They can pick Cam Smith

Ponga doesn’t play for the kiwis and thats not even your worst mistake.

Coles would be more of an edge forward. I’d play Cane in the middle to tackle and hit up. There would be one more back rower as its proposed to be 14 a side, I’d pick Vaea Fafita who is big and quick.
Props look good.
I’d have McKenzie at 1, would be brilliant returning from kicks and chiming in.
Barrett at 6 as second playmaker and runner.
Mo’unga at 7 to organise the team.
You have two solid defensive centers who can run and distribute
TJ would be a good dummy half, more suited to league than Smith.
Bearing in mind uncontested scrums, this would be my Kangaroos 14
1 Tedesco
2 Ado Carr
3 Wighton
4 Trbojevic
5 Ponga
6 Munster
7 Keary
8 Klemmer
9 Cook
10 Papalii
11 Cordner
12 Frizell
13 Trbojevic
14 Graham

Pretty damning how removing scrums shakes up only one side.

The ABs would get the ball every 5 tackles most of the time.

It’s just a post Covid sugar hit to fill the empty coffers, nothing more. That’s how it should be treated.

You would hope so.

How do you even understand him, I’m still looking for the right translation app.

Sivo didn’t see the back of Ted’s jersey, the grass did.
Who knows what will happen.

Can never have enough tackle bags.

Being able to play this year, ok. Moving forward, forget it.
How many JLT people and fans have you spoken to? Where is the desire for this proposal?
As for NSW tweaks, I would probably include 99.9% of the rest of the state. Something along the lines of the NRC teams is 1000 times better.
Also there is no desire for SOO, for example it works in league but not AFL. Each sport has it’s own strengths, this is what should be built on.

Congrats on taking the time to put forward a proposal, but there are some glaring holes:
– If Japan has the money, why do their players have to relocate for Australia’s benefit.
– The NZ conference has an Aus team as far away from NZ as possible.
– QLD is represented by Nth and Sth Brisbane, but better still, NSW is represented by two elite Sydney suburbs and a university. Certainly not broadcaster friendly. The whole proposal seems like it is designed around a small geographical footprint in a certain part of Sydney.

If it’s only this year, then maybe with a few tweaks. If this is a proposal moving forward, never going to happen.

Three months would suggest otherwise, must have been distracted by shaking your fist at Thorn shaped clouds. Wash your hands.

They aren’t TT comps in other sports, they include one side which actually benefit the governing body from increased TV revenue and marketing, not really giving anyone a bone. In fact rugby is the only code that anywhere resembles an equal TT share, it’s just that it also involves SA and a couple of other teams. Netball was an equal share until Aus decided to go it alone.
I’m not offended, I just never understood this rhetoric, which has gone on for years (not just your comment, sorry I just happened to reply to you), that one country is engaging in unconditional philanthropy whilst the other is an ungrateful scrooge. it just doesn’t reflect reality.

NZ has been playing against multiple Aus rugby sides since the early 90s and many Aus players have played in NZ sides. Have you not heard of Super rugby?
I don’t get all this one way charity talk.

Essentially two new sides makes it 2 Mitre 10 sides each which sits well. Financially it could be difficult though. Could look like this.
Northland and North Harbour
Auckland and Counties Manukau
Waikato and BOP
Hawkes Bay and Manawatu (The old Central Vikings)
Taranaki and Wellington
Tasman and Canterbury
Otago and Southland

Agree that one new side would be feasible though. Maybe between Taranaki, Manawatu and Hawkes Bay

It was a pretty sarcastic thumbs up mate.

Agree, especially after admonishing others one paragraph earlier.

“Unfortunately I suspect that few of the respondents on this site have little if any information about what has really been happening at RA headquarters. But in typical Roar fashion don’t let any facts interfere with what we ‘know’.”

“Without knowing the facts of the matter I think it is entirely possible that Ms Castle was asked to apply for the job, on the basis that appointing a woman would raise the profile of the sport and further the ARU’s credentials as an inclusive organisation.”