I recently read the term ‘viewership’ in a Roar article and almost queried the author about why he used that term rather than simply ‘viewing numbers’.

The Hooper appeal decision: What are the ramifications?

We have all seen the video of the Michael Hooper/Sanchez incident in Mendoza. We all have views about Nicolas Sanchez’s actions. 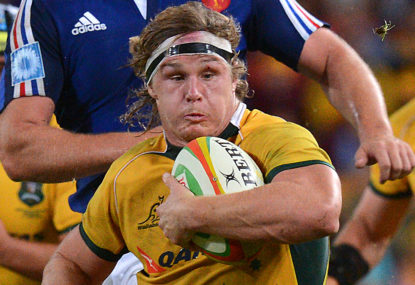 The Hooper appeal decision: What are the ramifications?

Let’s take a short (and subjective) look at how Australia’s Super Rugby teams went in 2012.

French T14 rugby still gets away with breaching IRB regulations

In the recent ‘global international window’ in June, those who followed Argentina’s Pumas against the touring French may have wondered how the French T14 clubs managed, yet again, to avoiding releasing Puma players to their national team.

French T14 rugby still gets away with breaching IRB regulations

The next evolution of Super Rugby

A good administrator, like a good fighter plane designer, starts work on the next model as soon as the contracts for production of the current model are signed.

The next evolution of Super Rugby

Rebels should be looking to Argentina

I read with dismay a press report in which it was asserted that the Melbourne Rebel’s talent scouts where not considering Argetenian players because all the good ones were already in Europe.

Rebels should be looking to Argentina

The Blackett report is out and the Guardian’s Paul Rees has reported that it “cleared” the four England players of allegations of a sexual violation.

AH, I have only seen some newspaper reports from France (L’Équipe, Ouest-France) run through google translate. I am unsure if they (and the translation) are correct on details so don’t want to rely on them.

Perese’s Bayonne contract ran until 2022. He last played on 6 December 2020, and he returned home to Australia later that month. That is about all that is certain.

Hopefully Perese, who is still just 23, can get his career back on track.

Hopefully. I have said before I don’t think rugby should be chasing the players who go off to league. Happy to be proved wrong in the year ahead.

Why was Perese’s contract cancelled by Bayonne? He looks to have only started 3 games.

There is no law against a “forward pass” per se. Momentum takes many passes forward. The law prohibits a throw forward, and looking at the video, the hand did not move forward as the ball was propelled. Momentum and perhaps some spinning rotation caused the ball to loop, but the hand movement was towards the passer’s try line. Clear and simple application of the law says no breach of the throw forward law.

If I had a dollar for every time I have tried to explain this to people angrily claiming their team was robbed by a “forward pass” , I ‘d buy a case of Grange. 😁

Should have carded the tackler, then turned the penalty round for Sinckler’s dissent.

'Are you f---ing serious?' Kyle Sinckler slammed for blowing up deluxe at ref

So, TWAS, why, if there were many thousands of people there as you argue, have the Rebels suppressed the attendance figure?

Gill is not available*, neither is McMahon atm. I don’t think you’ll get much traction with your claim that Samu & Wright are “far superior” #7s., to be fair.
You do know that Gill received a contract offer from RA earlier this year and rejected it, don’t you?

TWAS, 1/3rd is about 10,000 – and if there were that many there, the Rebels would have released the figure, and it would be on the Austadiums site where the real figures are recorded. You opinion remains an opinion, until a real figure is sourced. What proportion of the crowd were cheering on the Chiefs, in your opinion?
In order to comment on the Rebel’s *alleged* financial woes, and work out where the *alleged* extra about $30 million they have received (in addition to the usual allocation to the Super teams by RA) went, I looked for their annual reports on line. They are not available for viewing on line (apparently they are too big to upload), unlike those of RA, and other Super teams.
(The *alleged* $30 million involved RA write off a $13million loan, plus additional $6 million per year payments to the private interests in and around the period 2017-2019, according to evidence presented to the Senate inquiry.)
There is a note suggesting interested parties “can” (not “will”) be provided with copies on email application. I made an application by the indicated method. I’ll let you know if I ever get a response, but I haven’t had one yet. Hence, I didn’t go into that in this article. Once I receive the expected response refusing to supply copies, I’ll start drafting a follow up.

You do realise that in this present exchange, I have deliberately copied your posting schtick, right?
And yes, in circumstances where the correct restart (or full time) after a TMO/AR call was under discussion, Gardner changed his call – as you’d hope any decent professional ref would – albeit TJ was wrong and the TMO had that one right.
Now, where were we on that discussion of how NZ lost the RC posting rights last year?

So TWAS, you agree that even if the figure was an underestimate, that most of the crowd were supporting the chiefs, being the extra support the Kiwi teams get.

Basically we have a difference opinion on whether it was <2000 (as reported to me) or perhaps what… 4000?

No need for name calling.

TJ, I have no interest in engaging with someone who starts hurling personal insults in their first post.

So, you’ll never respond to one of my comments again, then? 👍

Both of your examples are changes to the restart option after TMO/AR decisions. They are not a ref changing that ref’s decision because a player said he should.

TJ, as soon as you start hurling insults and hyperbole at someone who’s opinion differs from yours, you have lost the debate.

The provenance of that crowd figure is in the article.

And that is another one where the ref went to an assistant to get a recommendation, so not his decision that was changed.

Again, that was a TMO call – Gardner had already awarded the try.

That wasn’t his decision, that was the TMO’s decision that was changed.

Yes, he was on a first name basis with the All Blacks.

I’m sticking to my guns – No Ref ever, anywhere, has changed a decision because a player told him to.

if the weather isn’t incredibly poor usually pull between 7-12k if a big Kiwi team come to town like the Crusaders.

Except in 2019, when the Rebels were playing the Chiefs and within reach of a semi spot, and less than 2000 people turned up, and most of them were supporting the chiefs.

Here’s a question- if you have to put your own money in, every week, to keep the rebels afloat, are you willing to do that?

All the same, money is still going to be the problem.

Just say there are 4 pools, with ‘tiered ‘ (by groups of 4) opponents, and somehow the random draw produces a pool with* the ABs (tier one) , the Wobblies (tier two), Georgia (tier three) and USA (tier four). That gives two home tests each in NZ/Oz against lower tier opponents, and a fight over where “Bledisloe game one” gets played that year. A fight, basically, over money.

Meanwhile, you could equally have a group drawn from the tiers with England, Ireland, Wales and Italy in it. (2, 5, 9 & 14.) Where are they going to play that in July?

Or, do you put the whole thing in one country and move the windows – in which case the greedy French and English clubs will probably start court proceedings, again.

“each team gets equal money from the comp”

So, the ticket and broadcasting dollar from say the ABs v England at Twickenham is going to be (partly) distributed to the Fiji & Georgia Rugby Unions?

TWAS, it was VO not me who grasped at place of birth as a criterium when he claimed Elsom as a Victorian player. His list lacks objectivity.