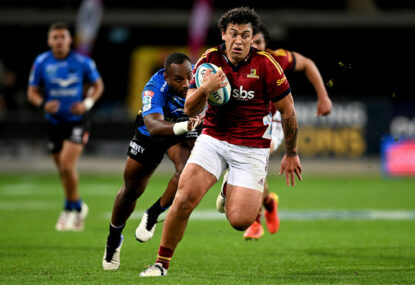 From the mind of a truly unqualified couch-coach, I’ve used the small hiatus in international rugby, to ponder aloud what I’ve thought to be…

Agreed, to an extent. I look at the general conditioning & fitness appearance of our players, and it appears that we’ve gone too far in search of ‘aerobic fitness’ – guys who are intent on trying to play the game faster & faster… as opposed to bigger, heavier players that may not have the same fitness levels – but are more dynamic in their play.

It can still be an advantage, in some instances, but it’s gone too far in one direction, away from the reality that Rugby will always have some degree of ‘stop-start’ and set-piece action – where size/strength are still weapons in their own right!

Cane: NZ not far off return to top form

We should at least get to see Dominic ‘Big Bird’ back in the NPC after his French stint – along with Isaia Walker-Leawere (who went well against the Irish), and Pari Pari Parkinson (assuming his injury curse doesn’t come back).

There’s your team’s ideal recruitment target for next season!

I wonder how many of Razor’s assistants will they go through, before they admit Fozzie is the dud part of the machine!

Like an injured animal in the wild, they’ll thrash about in a dangerous manner – but ultimately, the issue of poor game-plans/selections won’t be overcome by emotions. If the Boks keep calm and apply pressure, they’re well-equipped to maul us off the park!
To your last point, I would offer the counter-point to ponder: NZ fans/media (and even our coaches) often lament when our talent is drained by overseas forces – and yet here is a guy showing passion for his country, a loyalty/faith in an employer (that frankly, doesn’t deserve it) – and an un-matched level of success in our highest club competition…
The question should be, if that doesn’t count for much – why should anyone stay?

We will simply hear about how travelling to SA is a massive challenge, and respect to the Boks for blowing us off the park – ‘but don’t criticise, we’re improving!’

Rumor has it Caleb Clarke’s hamstring MIGHT heal for this series too! 😂
Who needs healthy, readily available players anyway!!!

Irrelevant. I guess the experts see the Aki clean-out differently than myself. But Porter has been cited post-game, indicating it WAS fortunate that he was not shown a red card at the time.

But the Irish clearly haven’t completely adapted – have they? They were just VERY fortunate that the officials somehow missed multiple head-contact instances – whereas last week they didn’t.

Regardless of the moaning of some fans, and biases towards our own team/s, I’m sure we all just want consistent rules, applied consistently by officials – even if you’re loath to admit it.

Not necessarily. But to dismiss the significance of a RC/non-RC decision, on any contest, is disingenuous.

Thanks for the article Geoff! I’m no fan of Foster and how the team is operating – but the discrepancy in punishment for Porter’s headclash is frustrating, and could rightly be pointed to as a major factor in the series.

Retallick having his cheekbone broken, the ABs losing a hugely influential player (low force, no danger was the call from some?!) for only a yellow card to occur as punishment, was a great result for Ireland at that point!

But, given the fact they leaked two tries when they were a man down for 10 minutes – one can only wonder what would happen if they had to play out the remainder of the test with 14 men (like the ABs had to, last week).

But I guess that’s just the lottery of rugby union officiating at the moment. Chaos.

If it were true, I actually hope they give Vai’i the start at #6, to try and emulate the larger presence and lineout strength in the role!

I do actually wonder whether we’re at the point now, where Fozzie may need to consider the ‘loyalties’ of some of these players… I mean for guys like Havili, Mo’unga & Jordan, two very different paths could unfold from this result.

They can work their butts off this week, to help inspire a win, and secure an embattled coach’s job. The same coach who wants to shuffle their roles, and doesn’t see their form in Super Rugby as enough to warrant consistent starting positions.

Or things could go pear-shaped, and suddenly their club coach (who sees them as crucial cogs in his team) could become a suitor for the ABs role…

Don’t forget Georgia smashing their own ‘glass ceiling’ this weekend to beat Italy!

Little heart, zero discipline: The falsest of All Black dawns collapses in a heap

Damn, Kellaway is a big loss – I was looking forward to him stamping a claim to that #15 jersey!
I think Wright would be a handy alternative – with the ability to assume some playmaking capacity, if required. Keep it simple for Petaia initially starting on the wing – and if they’re comfortable, allow a bit of inter-changing of roles throughout the game!

So what I’m hearing is: Nelson Asofa-Solomona may have an itch to be scratched in the XV-man code??
Now that guy would be a dynamic lock/loosie!

Well if there’s an NZ, Australian/Pacific, and Japanese champion – perhaps just invite the Euro/SA champion along to a single location around July – for two weekends of elimination games (randomly drawn) to determine a ‘world club champion’?

AJ Lam is not gonna be joining the Highlanders, sorry. He is actually a very valued member of this Blues team, and has stepped up every time he’s had his chance.
Talk to other Kiwi fans (non-Blues ones), and it’s THEY who choose not to see the talent. So why move south only to be benched for Sam Gilbert & Jona Nareki?

Laulala, Clarke, S.Barrett… just to name a few this year.

Saving the best for last, Tony 😂
I’ve always thought the football method would be best actually. Announce the playing squad mid-week, and leave the opposition/media/fans to guess the starters & positions – until revealed before kickoff.
Add a bit more intrigue to the build up!

He’s not going to be selected with ‘first choice 23’ in mind. But we need more playmakers with test experience – even in a limited capacity.
Otherwise, we may end up in an important game without B.Barrett, Mo’unga or McKenzie (see 2011 RWC) – and it would be poor planning to throw a rookie into that furnace!

Exactly, they can’t – and it also has further implications regarding the balance of skills/roles for the trio as a whole (to piggy-back off plentiful comments/articles made by Highlander on this topic).

In my mind, if they are insistent on Ardie at 8 – then we can’t afford to have another ‘offense-minded’ player like Akira. Otherwise our #7 ends up buried under every ruck, without the support needed.

We need line-out capability and work-rate: Jacobson & Robinson appeal for mine!

It seems the bigger the game, the smaller Ardie Savea looks as the primary ‘ball-carrying’ loose forward… No matter how many times the commentators say ‘leg drive!’ 😂