Since 2009 the AFL competition has seen a bottom five team rise to make the finals the following year. Last year it was Port, before that is was Adelaide, West Coast, and Sydney going back to 2009 bottom fives.

Why ninth is the new eighth in AFL

The AFL top four has everyone is a tiz at the moment, but another interesting battle, akin to avoiding the relegation drop in the Premier League, is the battle for ninth. 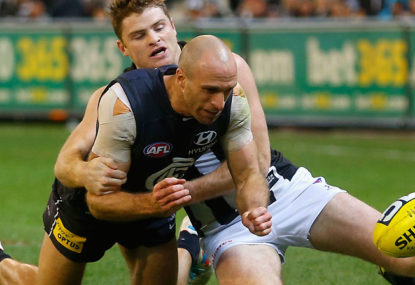 Why ninth is the new eighth in AFL

Developments in the AFL from Rounds 7 through 19

Each year in May an article comes out looking at the ladder positions at the end of round 7 and commenting on how rarely this does change.

Developments in the AFL from Rounds 7 through 19

Western Derby has all the hallmarks of a classic

It’s that time of the year again (well the second time of the year) when footy fans in Western Australia start preparing for the best game of the year. It’s the Western Derby (der-bee), despite Bruce McAvaney intentionally mispronouncing the word.

Western Derby has all the hallmarks of a classic

It’s clicked to me just what the Bombers are doing. Damn those sneaking buggers! First let me state my bias. I am a Freo fan. 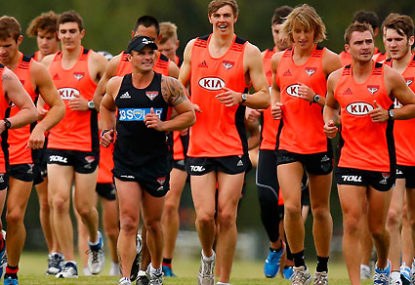 A prediction for the AFL's top eight

How many hours have I wasted … I mean spent productively on the AFL ladder predictor over the years? Mostly I admit in trying to devise a way that Fremantle could possibly make the finals.

A prediction for the AFL's top eight

A cursory glance at the nominees for the NAB Rising star award fro 2012 shows a good smattering of quality young players. Take a closer look at the list of nominees, however, and you will notice something very interesting.

It has happened every seasons since 1990, with the exception I think in 3 or 4 instances. Hell the Crows even won a premiership coming from bottom 5.

Last year it was the Saints, season before the Lions

The issue I have here is that 2020 was a weird year so maybe 2021 will be an outlier in that none of the Suns, Hawks, Swans, Roos or Crows will rise.

But if I had to pick 1 team I would pick the Suns with the qualifier that King, Anderson and Rowell play the entire season, especially that last bloke!!

Other kids like Flanders, Sharp and Hollands are going to impact that team too, also Lukosious is looking like a true quality player, as is Rankine – they have talent to burn but they also have a more stable set of mature age players for once

It could be an outlier year, but on talent alone the Suns should be the team to rise up

Freo’s last 5 first round draft picks has been 4 Vic kids and 1 Sandgroper / NGA pick. All 5 still with the club and all 5 look like ripper picks

Don’t think Freo cares about picking up locals or think that it is the safer option, but probably more so that he’s not a natural forward in the Ben / Max King mold

What is it about Cox that would make Freo not try and grab him if he was available?

Ahh, was wondering when this article would come out..it happens each year

Brad Hill ended up in Freo getting Caleb Serong. I know who I would rather have

Brandon Matera cost nothing. Shane Kersten was drafted in order to get Hamling as they were best mates

McCarthy, Bennell and Hogan all came with risks, yep none worked out. Neither have heaps of other trades. Bryce Gibbs was an abject failure, Jake Lever cost the Dees way overs, Polec has been a dud, Stringer a bust, Crameri flopped, Jack Stevens fizzled you can pick them for all teams

Can’t wait to read this same article again in 2021

Thank god Sheahan is going, Jacko got it absolutely right

The Saints back in finals the year when Ross Lyon is no longer a senior coach? The curse of the Rossco has lifted.

I’ll be cheering for the Saints this finals season, along with Brisbane.

I’ll also be cheering for ex-Dockers players like Mayne, Sutcliffe, Crozier, Neale, Menegola, Hill ….. so that pretty much guarantees a Tigers v West Coast GF – the only teams without an ex-Docker in them …. just kids of ex-Dockers (Bolton and Guv)

Freo won’t trade Hogan unless it is an exceptional offer.

If Tabs, Darcy or Lobb gets injured then Hogan is straight back in.

I think Freo are just being cautious with Jesse and not rushing him straight in, that plus Cox has gone better than expected in defence.

AFL Trades: Key forwards are on the table in 2020

Once Pearce, Hamling and Logue are back then Jesse goes forward again.

It will be an embarassment of riches to try and fit Lobb, Hogan, Tabs, Hamling, Pearce, Logue and Cox into the same 22.

Looked like it could easily have been called out on the full as well. No players where he kicked it and it went straight out .. just because Dwayne has a whinge doesn’t mean the umps are wrong

Freo definitely shirk on WA, but we have picked up Logue, O’Reilly, Henry, Butters, Thomas, Banfield, Watson, Pina, and Jones in recent years …. of course that none of those played on the weekend is damning, as well as Jones having been delisted

So over the past 4 drafts / trades we’ve brought in 16 WA players.

But the obvious point is we ignore the high end WA takent. Naughton, Kelly, Ryan and Allen are the main cases. I think Young and Serrong will work out to be smart decisions.

Will be interesting to see what happens under Walls and Longmuir this year given we are likely to have a top 5 pick plus a mid range round 2 pick. By all accounts our NGA players in Joel Western and Brandon Walker are decent players, both possible top 20s

But do we go with Denver Grainger-Barrass who is the #1 WA kid … and is a tall defender, or do we instead try and get another mid fielder like Nathan O’Driscoll who’s sister plays for Freo already

Six talking points from AFL Round 4

Fyfe, Walters and Lobb are no brainers

Pearce is a big miss, as are Brayshaw and Cerra – two guns coming into their third season and with a lot of upside.

Logue is the other one, last season he showed he can hold down a key position in defence as well as attack the ball. I’d have him in there ahead of Taberner, simply because of Tabs is 27 this year and has only played 72 games for 76 goals. He has promised for years but cannot string together a season

The ten players your team can least afford to lose: Fremantle Dockers

Luke Ryan is best 22 easily, so kick Duggan out. Not sure how Darcy beats NicNert and I’m a Dcokers fan

No way Vardy plays CHF, Lobb gets that gig and Mundy can have Tabs place.

Get Acres off the wing and put Walters there and Ryan in the forward pocket.

Should beat the Suns and GWS. Melbourne will push them but again playing at Freo oval without needing to travel is a bonus. Same goes for the Roos, if both teams make the final.

We have Hogan, Hamling, Pearce, Hill, Mundy, Wilson, Acres, Switta from the first choice 22 and then Aish and Ryan are both tests.

It could be half the best 22 out for round 1. If that’s half the numbers then it explains a lot about our previous few seasons.

Fremantles best 22 is not a 17th ranked side. But the fact that 6 of their best 22 are ovecoming injuries, and as you say another 3-4 cannot be trusted is where the 17th place comes from … plus you left Hogan out of the best 22, which if he’s fit and in a good space he is one fo the first picked

There were some very positive signs in the game against Carlton as to how they will play this year with attacking precision kicking through the centre.

A backline with Hamling, Pearce, Logue, Ryan, Wilson and Hill will be hard to play against and should rebound the ball very quickly, with some decent kicks in there (plus some average ones in Pearce)

Injuries left right and centre and its a bottom 5. But their home ground advantage will see them avoid the spoon and 17th position I would think

Another season of getting games into players like Serong, Cerra, Brayshaw, Sturt, Valente, Brayshaw and maybe Henry in the second half.

I’ve looked at this stat myself and over the past 26-27 seasons I think it is only three times that a team in the bottom five hasn’t made finals.

Three times I think a team from the bottom five has played in the GF – Melbourne in 2000, Port in 2007 and Adelaide in 97 – although this may be more.

Sometimes teams spend a year down due to a catastrophic run of injuries, other times its just the age of the group means the players need a bit more maturing.

The Saints and Dees most likely due to age and experience of their sides.

But it can come down to injuries, especially teams that don’t bat too deep. If Freo lose Fyfe then that will de-rail the season. If Gawn goes down for the Dees they will need to rely on Pruess and his 15 games of experience.

For Freo to make it they need to get Pearce, Hamling, Hill, Wilson, and Hogan back on the park and ensure Taberner, Lobb, Fyfe and Walters stay out there. Those 9 players, plus Mundy are essential to the season being a success and a finals chance

Nothing wrong there – bit of a melee, fine at worst

Imagine Morabito in the 2013 Grand Final or Clem Michael playing his 200th game. What about the current coach J Lo retiring at 26 or Des Headlands bl**dy knee

Trent Croad did what he was picked to do, increase the exposure of the Dockers who couldn’t sign a sponsor to save their life. That we got 240+ games out of McPharlin was a bonus

Jayden Pitts heart issues, Josh Simpson not being able to adjust to city life and the rigours of a profressional club. Polak’s knee that cut him down, Fewsters knee, Michael Barlows broken leg, Palmers knee at the start of his second season that robbed him of his pace.

He was never the same after that first season.

BTW I love having Cam McCarthy on the list. He’s 24 and seems to have himself together and with a new coach might just be the catalyst for a solid season.

No suprises that Ross didn’t make whosale list changes, he just came in with a game plan that worked with the list that we had.

Harvey, for all his niceness, was not developing a winning brand of footy and would not have coached us to a GF

haha – I am a Stevie J but not the Stevie J …. much to my bank balances disgust

Roberton wanted to go home, Freo wanted him to stay but agreed to trade him for his personal well being. He was a kid just developing and has turned out nicely for the Saints, heart issues aside.

Sometimes life gets in the way of footy, but at least Freo did the right thing by the kid and his then pregnant fiance

Harvey? The bloke who didnt want Fyfe and had to be over ruled so we didnt end up with Bastinac? Yeah … nah

Walters was kicked back to Swans by Lyon for being unfit, turned his career around.

Harvey already had Sandi, Pav, Mundy, Johno, McPharlin in the team when he got it. Nice core to have