With one round to go in the Rugby Championship, it’s a safe bet that some results and performances have surprised most people. 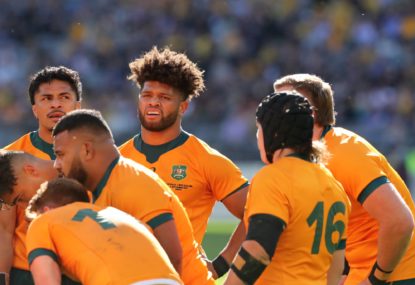 Growing up, a hope of mine was that people would become more together, not less together. The world of 2021 is perhaps more divided than it has been in recent memory, with much hate and disrespect.

Nicely reasoned Geoff, and agree with most selections. For me, a good team, but Marx to get the nod at hooker. A colossus in the set pieces and tight-loose consistently, whereas for me Codie Taylor lit up moments but also disappeared on occasions. He must also shoulder some blame for the All Blacks’ poor lineouts at times.
Your points about Aaron Smith are pertinent too. Begs the question, is he the reason the Wallabies looked so second-rate in those opening Tests?

Neither and build depth. If you are in a World Cup, you almost need an entire additional team to win. I think World Cups are attrition more than anything and the Wallabies need depth if they are to succeed.

Cheers Emery. Nice analysis from you too.

Glad you had a good laugh. No one gets easy wins at Test level over any side. They did win, as you point out – but the scary thing for everyone else is how much they can improve.

How do you know they are fake injuries?

Nick, I typically enjoy your work, but not all of this. Something is missing for RSA and I’m not sure it’s Erasmus. As much as it’s tempting to think of South Africa as being in the Stone Age, they have just discovered Skype. No, the Boks are falling flat mentally. And its also got nothing to do with refereeing. Both refs in the last two weeks have done a hell of a job and would have done regardless of where Erasmus was in the world. The English refs are head and shoulders above all comers. The Boks are flat mentally and perhaps not executing their game plan well, and the Wallabies were well coach against the Boks. That’s it.

Reason why I say that is its very easy to coach a team to beat one side. For me the Wallabies’ losses to the All Blacks can’t be swept under the rug following 2 good wins against the world champs. Argentina won’t be as easy to beat physically and will likely deny the Wallabies front foot ball to the backline. A good weekend of Tests coming up for sure.

Nice article Geoff. On all sides, a very balanced account. Thanks for writing. I am curious as to how the Wallabies go against an Argentine side that looked a little better this week. That for me is a litmus test for them. Also excited to see your upcoming article!

Thanks Nick.
It was hard to see heights from some of those clips but will take your word for it.
It looked to me at times that the Wallabies were boring in – in the clip where the Boks are apparently moving towards the touchline, the Wallabies flank is definitely not parallel to the touchline the prop’s backside is certainly not square. Is that a separate issue to what you highlight above?
It astounds me that a Wallabies scrum that typically ends matches resembling a pretzel is suddenly holding their own against one of the best scrummaging teams in the world

Cheers Jonty. I should clarify (I posted above in the thread too) the article was originally entitled “In Defence of Diversity”. The current title is not what I would have called it and does not reflect the article’s intent. But hey, it grabbed eyeballs!

Thanks for your views everyone. As an FYI, the article was originally entitled “In Defence of Diversity” and spoke about rugby holistically, but with particular respect to the Springboks. The title was changed by the Roar Editorial Team.

Having snoozed on this overnight, here are some thoughts from a neutral:
For the Wallabies, a win is a win is a win is a win. The did enough to beat the world champs. Excellent composure from Cooper. The forwards muscled up to a certain extent, even if dubious tactics helped stop Bok momentum at times. Found space and broke the Bok line on occasions, which will provide confidence.
For the Boks, a loss is a better outcome than a close win. They were below their average today; had Pollard kicked at his average it would be a different mood in the Wallabies. Ox Nche played his best game in a Bok jersey, and would feel unlucky not to have more reward for his scrummaging. Boks looked awfully flat, but would take heart from the way they fought back. Restarts- an area of strength under Nienaber – were an area of concern, and provided the platform needed for the Wallabies to play into the game. This is not the end of the Boks as some believe.