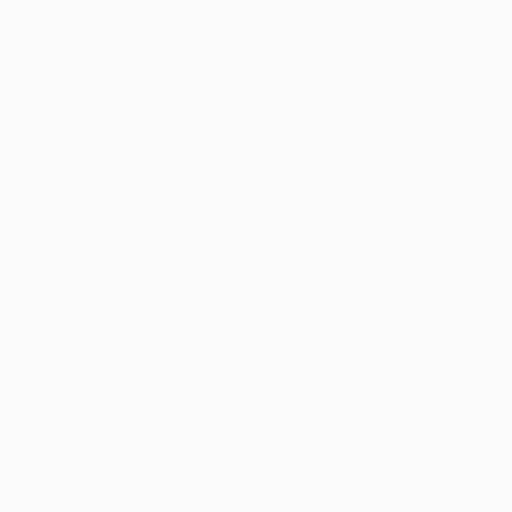 With setback comes opportunity. While the Wallabies are no stranger to setbacks, now comes a time they can finally grab this opportunity with two hands. 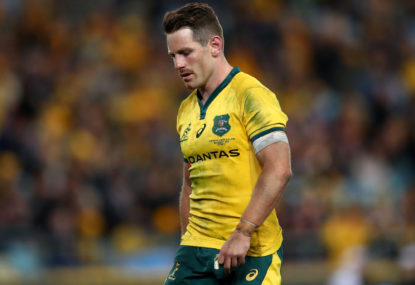 While all talk in Australian media this week has been based around the Pocock return against Samoa, there are far more pressing matters for the Wallabies occurring in the North.

Angus Crichton could be the Wallabies’ next inside centre

In 2013 and 2014, Angus Crichton represented NSW and Australian Schoolboys, and played an integral role in the Scots College team that won the prestigious GPS schoolboy competition. 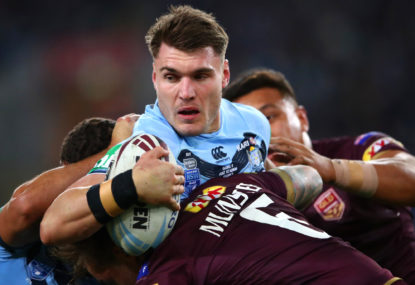 Angus Crichton could be the Wallabies’ next inside centre

The Bald and the Beautiful: The case for Meakes and McCaffrey

What was it that made the Wallabies successful in the past? 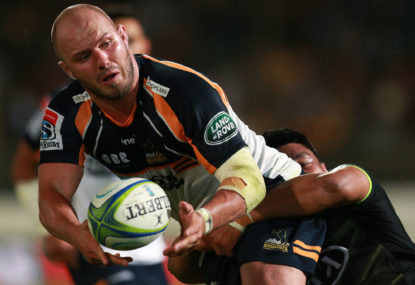 The Bald and the Beautiful: The case for Meakes and McCaffrey

ROG and roll: Why the Wallabies need O’Gara

With less than three months to go until the start of the Wallabies’ 2019 campaign and no attack coach named, alarm bells are beginning to ring. 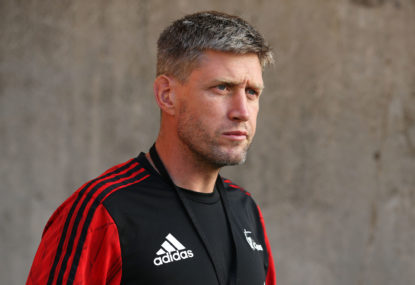 ROG and roll: Why the Wallabies need O’Gara

Yes, the shoulder is an old injury… but the infection occurred prior to his most recent surgery. The reason he can’t get surgery is due to this recent infection, and this iniability to undergo surgery is what is forcing his retirement! Therefore, Souths are entitled to salary relief!

If Sam Burgess retires, South Sydney must pay the price

Not a huge surprise – Slade has been injured and I think that’s why he’s been coming of the bench for most of the pool games. Would have expected him to start against France had that game not been cancelled. While Ford has played very well this World Cup, he has been known to struggle in big games and I think his benching makes England far more dangerous. The Tulagi/Slade centre combo was unquestionably part of their strongest side in the 6 nations!

Can’t wait to see Tuilagi on Kerevi! Battle of the titans!

They’re not ridiculous laws, player safely is paramount and with the continuing development of athletes the collisions in rugby are getting bigger and bigger. This has been brought about because there has been player deaths, and World Rugby has rightfully decided that enough is enough.

While it can be a little frustrating to see a red card in the first half of a game, I ask you – is this not better than the potential alternative for player death on live TV? Because, if World Rugby doesn’t crack down on the high shots, that’s where we’re heading.

The Rugby World Cup has turned into a joke

Absolutely! If only those roles had been tested against Wales…

Honest points about Toomua, and I wholeheartedly agree. While he has shown a lot of form off the bench, starting and finishing are very different. Last night he really struggled to straighten our attack, which was worrying.

CLL must start against England, but I worry that he’s undercooked. If we beat England after all the chopping and changing we’ve done in the halves Cheika is going to look like a genius for not showing his hand. Unfortunately, I think he’s going to look the fool given none of our 10s have had enough gametime to warrant a quarter final starting birth.

Another halves pairing? I really would have liked to see some more consistency leading into the finals…

Hooper to the bench, To'omua at flyhalf among ten Wallabies changes for Georgia clash

Geez, moving DHP back to wing after the great game he had against Wales at 15? I don’t understand these selections and constant chopping and changing.
It’s a ‘rest’ game yes, but still an opportunity to work on combinations.
Players will bring out their best performances if they have a chance to play in the same position consistently. Now DHP will have a subpar game on the wing and he won’t be sighted again.
That said, good to see White and CLL back. But wouldn’t have minded seeing some work done on a back 3 combination with DHP, Petaia and Marika.

Is three different halves pairing throughout the World Cup really the ‘answer’? Toomua certainly had a strong game, but playing well as a starter and playing well off the bench are two different stories – just ask Willy G.

We need to stick with what we know, starting White and CLL with Toomua and Genia off the bench.

It’s not the refs that killed the wallabies last night, it’s our lack of halves selection consistency.

Wallabies down but not out after Wales loss

On first look, the selections seem ridiculous – I do understand AAC and DHP. Biggar is an excellent kicker and we all know how unreliable Beale can be under the high ball – he was going to get peppered so I think the DHP selection makes more sense against Wales. With Hodge out too and the selection of only 1 specialist winger, AAC was the only option for the 14 jersey.

HOWEVER, I am dumbfounded and disgusted and the Genia and Foley selection. Teams do not win the World Cup by bringing in new halfs for the big game – we’ve spent all season preparing a CCL and White halfs pairing and after one poor game we dump them? No doubt dropping Christian will do his confidence a great deal when we need him later in the tournament. Genia was also starting to showing how useful he can be off the bench.

Cheika needs to have a hard look at himself… idiotic

I expect Farrell will mainly play 12 in big games, with Ford playing 10.

No, no. I have no issue with New South Welshman, and I do recognise that Sydney juniors who went on to play for other Super Rugby clubs contributed enormously to those sides. I also hold high respect for many of the aforementioned players.

What I, and many other Wallabies fans complain about is garbage players consistently representing Australia for no other reason than that they play Super Rugby for the Waratahs. And some of these absolute pillows, have embarrassingly played a significant amount of tests for the Wallabies – continuously serving to undervalue the Wallabies jersey.

However, we do seem to be finally cleaning up nonsense selections such as these so perhaps my comment was a little unwarranted.

Radradra is playing on the left wing…

Yes, good points. I’d say plans for SA in the quarter have been in plans for months and I would imagine that is the main reason for selecting Toner over Kleyn. If Schmidt looks to play a backrow of Stander, Conan and O’Mahony with Kleyn and Ryan in the Second-Row you’re looking at a pack that really could challenge the Boks pack for physicality.

I personally think Ireland will go further in this World Cup then most think. If the World Cup had been played a year earlier everyone would have been tipping them to play New Zealand in the final – however, a poor 2019 has somehow made them a write off.

It seems that Schmit has spent the 6 nations and most of the warm up games experimenting with his side – and while big losses to Wales at the end of the 6 Nations and England are certainly cause for alarm, I’m certain that Ireland won’t be the one we see in the World Cup.

What is more likely, is that we’ll see the Ireland that played last week against Wales. Powerful, patient and poised; building phases and then striking at the right moment. This is Ireland’s true strength: build phases and slowly truck into the opposition 22 where they will either unleash their dangerous backline or will receive a penalty for opposition infringement.

South Africa will be the team that will be most likely to exploit this game-plan, but something tells me that Schmit has all eyes on that quarter final game and will have something up his sleeve.

I suppose the strategy is his positional flexibility, as he can play fullback, wing and centre at international level. The other two options – Banks and TK, can’t provide that to the side…

That said, you wonder why good young players are heading off overseas when 35 year olds are keeping them out of the team?

Wallabies and All Blacks gamble at Perth, are they defying the odds? Good for them

I don’t understand the second last paragraph dig at Giteau for no apparent reason… Gits had a huge rugby World Cup, particularly the support he provided Foley. Foley is still playing for the Wallabies thanks to that form that Giteau helped create.

Michael Cheika has found his Wallabies team, now he has to stick to it for the World Cup

Short answer, no. Speight, Pulu and Sefa should be considered though….

O’Connor’s best position for the Wallabies is unquestionably 12. But, this isn’t how he’ll be used (if he is at all). The value of O’Connor brings to the Wallabies is his versatility, being able to cover every position in the backline but 9. Therefore, his best position is ‘utility back reserve’ this will allow Cheika to stack his reserve bench with forwards.

It’s been a while since SBW has been an x-factor player for the ABs though. He also hasn’t forged much of a combination with Goodhue. I think going forward the ABs will be looking for a Crotty and Goodhue centre pairing with ALB coming off the bench. I wouldn’t be surprised if this is the last we see of Sonny Bill…

I can’t see NZ taking the foolish Wallabies route and playing two specialist 7s. I see the merit of having both Cane and Todd out there, but I don’t think it’ll fit into the AB’s plans.

Disappointing to see Banks out of the squad. I understand we need to play around with combinations prior tot he World Cup – but don’t we already know what Beale can do in the 15 jersey. Give Banks more time to develop over the next few weeks and he could be a real asset to the Wallabies – leave him in the stand at your own detriment Michael…

JOC hasn’t played enough 10 to be considered for selection and even at club level he isn’t considered a genuine fly-half. He was initially brought in to play 10 at Sale, but was bumped from that spot after only a couple of games. O’Connor is realistically more of a ball runner than a ball player, and suffers similarly to Beale at 10 crabbing across the field looking for runners. When he does play direct, it limits his vision and he’ll struggle to bring his backline into the game. I think at this stage of his career he should be considered as a 12 – however I’d say it’s a bit of a stretch to consider his form at Sale as ‘world class’.

The changes the Wallabies need to make to beat Argentina