David Warner joined the Australian cricket team largely unheard of outside Sydney, but his remarkable international debut at the MCG on Sunday night could be the makings of a new star.

David Warner burst onto the Australian cricketing landscape in 2009 after a remarkable Twenty20 debut and appeared to be set for a career as a limited-overs specialist, but after a swashbuckling Test century against India at the WACA, Warner now looks to have a promising Test career ahead of him. 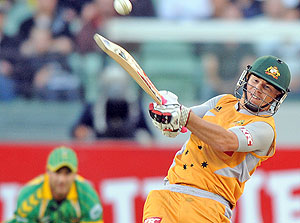 Warner’s no-holds barred batting technique had many doubting whether he had the mental application to succeed at the longer version of the game, but after carrying his bat on the way to 123 not out against New Zealand in only his second Test match, he soon put those concerns to rest.

Warner’s astonishing 89 from 43 balls, including six sixes and seven fours, easily upstaged his teammates and was the backbone of Australia’s 9-182 in the first Twenty20 match against South Africa.

His towering hitting resembled that of a baseball slugger and was reminiscent of the extraordinary hitting of New Zealand’s Lance Cairns, who smashed six sixes at the famous ground during a one-dayer in 1983.

David Warner, 22, is actually a throwback to the 19th century as that was the last time an Australian side featured a debutant who had never before played first-class cricket.

John Hodges and Tom Kendall, who played in the very first Test match in 1877, are the other two players to have done so.

Before this knock, Warner was arguably best known for wielding the revolutionary flat bat, which allows batsmen to use either side of the blade.

On Sunday night he opted for a conventional blade but his performance defied everything.

It also means he is now a shoo-in to play Sheffield Shield for NSW and could even be rushed into the Australian one-day side.

“I wasn’t nervous, I felt very good right from the beginning … I loved every minute of it,” Warner told the Nine Network after his innings.

Naturally, Warner’s knock hogged the limelight during the Australian innings.

How Australia’s David Warner reached his half-century from 19 deliveries against South Africa in Sunday night’s Twenty20 at the MCG.