THE 2008 WALLABIES
The Wallabies are coached by former Crusaders coach Robbie Deans. Their Tri-Nations squad for the series against the All Blacks and the Springboks is: 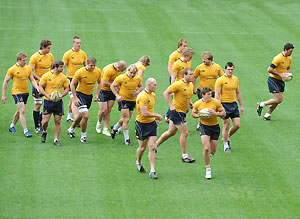 KEY PLAYERS FOR THE WALLABIES
Coach, Robbie Deans
Adds huge fascination to the Tri-Nations. Can New Zealand’s premier domestic coach end the Wallabies’ seven-year drought?
Captain, Stirling Mortlock
Getting on in years but still a massive presence on defence and leadership. Maturing into Australia’s Tana Umaga?
Flanker, George Smith
Just gets better and better and is the glue in a balanced loose trio. Without McCaw, no team can match Smith for ball-snaffling.