The beauty of Melbourne’s sporting precinct is its proximity to the city CBD, and this is what Sydney needs. Sydney should build a Central stadia.

Part of the joy of attending sporting events in Melbourne is the experience doesn’t start and finish with the siren. You can visit restaurants, bars or pubs before or after the game, and is why Victorians, especially female Victorians, support sport so passionately.

The game is the focal point, but it’s the build up to the game and the ‘debrief’ afterwards that makes it so much more enjoyable.

ANZ stadium is a hybrid stadium designed to cater for ‘rectangular games’ (Union, League and Soccer) and games that require an oval playing surface (AFL and Cricket).

Unfortunately, the seating configuration is not suitable for the ‘rectangular games’ – the spectators are too far from the action. I am excited about the proposal to reconfigure the stadium to be a true rectangular stadium, but I don’t think it requires a roof enclosure.

This, however, doesn’t rectify the fact that Homebush is in the middle of nowhere. It may be the geographic centre of Sydney, but it’s not the demographic centre.

I have attended many blockbuster union, league, AFL and football matches out at ANZ.

I enjoy sitting amongst 80,000 plus screaming fans, but I am daunted by the trip there and especially the trip home.

I would like to ride the euphoria of having just attended a top class event and sit with friends in bar or grab a late night meal in a comfortable restaurant. But instead I am faced with a 1.5 hour trip home.

As I wait at the Olympic station with tens of thousands of other supporters, we are herded into the trains like cattle onto a road train.

The adrenaline high I was feeling quickly turns to despair as I wonder why the line I have joined is moving slower than all the others.

We are tired, but all the seats are taken so we’re crammed in a train and head off on a soulless journey waiting to alight at Strathfield or Central. And then line up for another train.

Don’t ever contemplate driving. And the buses are equally painful.

I don’t mind going to ANZ for one off major events (such as the World Cup Final or NRL Grand Finals), but I don’t want to go out there on a regular basis.

And I am a member!

One day, with population shifts, Homebush will be a shining beacon in Australia’s stadia but they have to start working on bringing it a social vibe.

In 2008, the Lord Mayor of Sydney, Clover Moore, earmarked the space above the station and its sprawling tracks for a new Convention Centre. I have heard no more of this plan and I think it’s a poor place for an International Convention Centre.

Delegates want to see the harbour, which is why Darling Harbour is popular.

However, a stadium build here would be perfect.

Nearly all trains from Newcastle, Wollongong, the Blue Mountains and Greater Sydney passes through Central Station and the large proportion of Sydney residents are within a short drive to a train station, even the North West and the Northern Beaches.

(The proximity of Southern Cross station to Etihad Stadium in Melbourne makes attending games there effortless. Sydney needs an equivalent).

Surrounding Sydney’s Central station are a plethora of bars and restaurants. One can head to China town, Cockle Bay or Paddington, for example, and the area is filled with large hotels for International guests.

Who will pay for it?

Well, that’s another matter, but at least there is an option to bring life to Sydney’s sporting events. 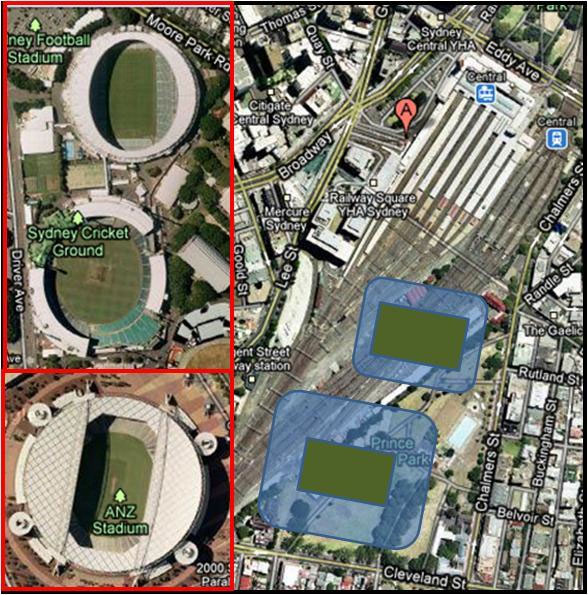 Image Google Maps: Central Stadia, a 70,000+ seat stadium and a 15,000 seat stadium build over the tracks and part of Prince Park in downtown Sydney. Inserts of ANZ stadium, the SCG and the SFS show the relative size of the new stadia.