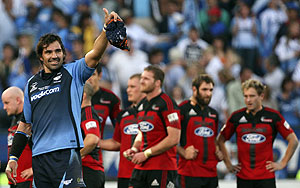 Question: How can winning your conference not benefit your team as much as you’d expect? Answer: If your overall points tally seeds you third amongst the finalists.

Consider this possibility your team have completed their road trip, they’ve suffered some injuries, and have won their local conference.

However, on the overall points table they finish just below the other conference winners and miss out on a valuable bye.

They console themselves with the fact they’re playing at home and then learn their sixth placed opponent is from the same conference, have not had to travel outside the country for a few weeks and also enjoyed a bye in that period.

They play their knockout final and the conference winner loses. This scenario could happen and maybe even this year.

I accept that in knockout matches nothing is guaranteed and the finals series presents every team with an equal opportunity to succeed, irrespective of what has happened beforehand. However, why make a distinction between the three conference winners?

Ewen McKenzie raised his concerns about the anomalies of Super Rugby’s finals system in his SMH column earlier this year.

He drew upon his experience in coaching at the Heineken Cup, which has four pools of six teams. Four pools create a natural finals program of quarterfinals, semi-finals and a final. To that end all pool winners automatically qualifying makes sense, and it’s equal for all.

The original Super 15 proposal did not include automatic finals qualification for each conference winner. Instead the top six finals would literally be the top six finishing teams, regardless of their conference.

South Africa rejected this, and we have a clumsy finals system that includes elements of the original proposal (top two finishers earn a bye) but falls well short of rewarding the third conference winner.

So as we count down to the finals, I ask this simple question: If the incentive of running a tri-conference format in a competition is to gain an advantage by winning your conference, then shouldn’t the advantage be the same for all?