The thing about revolution is that you have to want change

The future Super Rugby picture became a little clearer over the weekend, with South Africa confirming that the Cheetahs and the Southern Kings will be the two teams withdrawn from the competition for 2018.

With the Cheetahs and Kings now free to “explore other international competition opportunities”, the South African Rugby Union is almost certainly playing a long-threatened card to head north.

That the Celtic-Italian Pro12 league will accept the southerners now feels about as done as deals get prior to formal announcement. The talk has been heading this way for the last few weeks, and the sudden postponement over the weekend of season launches by existing Pro12 teams only strengthens the ‘worst kept secret’ status of the imminent expansion of that competition.

Whether more teams from the Republic follow the lead of the Cheetahs and Kings remains to be seen, but it would certainly be fair to assume all four remaining Super Rugby sides will be keeping a very close eye on the transition of their compatriots. And the interest is evidently there, with suggestions over the weekend that both the Lions and Bulls could be interested in exiting Super Rugby if Australia can’t shed its one agreed team.

To their great credit, the SARU have played a very clever game in holding up their end of the bargain. It’s hard to imagine that Cheetahs boss Harold Vorster just called up Pro12 CEO Martin Anayi one day last week and casually inquired about playing alongside teams from Ireland, Wales, Scotland and Italy. Clearly, the SARU and Pro12 decision makers have been contemplating this move for some time.

Contrast SARU’s rational planning of their country’s professional rugby future with that of the ARU.

The only certainty we have currently is that the Western Force and ARU will commence arbitration discussions on July 31. That’s still more than three weeks away, and by then both the Melbourne Rebels and the Force will have finished their 2017 campaign unsure of whether they have a 2018 pre-season to start planning for.

The Rebels, for their part, steadfastly remain silent and with their hands over their ears.

But assuming for the purposes of this column that the ARU get everything back under control and do dissolve one team for next year – it doesn’t matter which one – what is the way forward for Australian rugby beyond 2018?

Once all the 2018 contracts are taken care of, how will the estimated savings from Australia’s share of the SANZAAR revenue be used to improve the game?

It’s all fine and good to say that cutting a team will reduce costs, but what is the plan for those savings?

Is it around the promotion of the game from the ground up? Will it be used to expand the TryRugby program nationally, with a firm view toward getting the program into more schools? Is it around improving infrastructure across the country at junior and senior level? 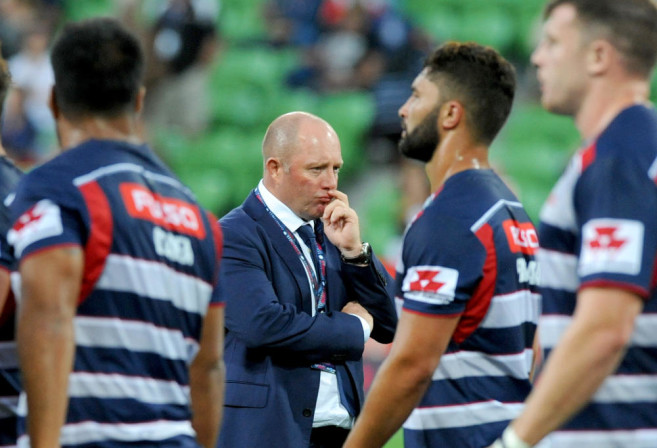 It could be any of these; it could be none of them. The point in listing them is that something needs to be tabled and outlined, so that we can actually see some fruit of what has been the worst year for Australian rugby in recent memory.

And my genuine fear if the ARU does manage to cull a side is that these savings won’t really be savings at all.

If there’s been one element of consistency within Australian rugby circles since the game went professional, it’s that with even the slightest sniff of surplus money, hands fly out from everywhere.

But the question Australian rugby really needs to ask itself is this: do you really want to change?

Arguably, this is the most important question the game faces currently. Get it right, and make the right plans, and the game can recover. Change nothing, and blow the money saved from axing the fifth Super side, and well… the game gets what it deserves.

And this is what scares me the most about what the ARU is trying to achieve. I’m not sure any desire to change exists at any level.

If it did, Waratahs coach Darryl Gibson wouldn’t have to be defending his position like pretty much every one of his doomed predecessors bar Michael Cheika had to do, and despite a horridly underperforming playing group.

If it did, we’d recognise performance and ensure the pathways are not just lip-service, whereby the national schoolboy champions can go through a tournament undefeated but have just two players earn national selection.

If it did, Super Rugby squads wouldn’t be all but finalised for the following season before the NRC even kicks off.

What really worries me about the game in Australia right now is that dropping a Super Rugby team is seen as the panacea for all ills. The team will be dropped, boxes will be ticked, everything will be rosy. Crisis over.

But if nothing changes within the administration of the game at all levels, in the coaching, the promotion, and in the pathways, what will have been achieved at all?

If the game doesn’t want to change, the revolution will have been pointless.