News surfaced a few weeks ago that Port Adelaide is in the top-four teams in the competition for salary cap room, despite their 2017 recruitment spree that saw them net Steven Motlop, Jack Watts, Tom Rockliff, Lindsay Thomas, Trent McKenzie and Jack Trengove.

However, losing Jackson Trengove (Western Bulldogs), Jarman Impey (Hawthorn), Matthew Lobbe (Carlton) and Aaron Young (Gold Coast) – along with Angus Monfries retiring – meant the club had enough room to add the six recruits and still have a significant underspend in its salary cap.

This puts Port in an enviable position for next year. As well as their off-season recruits, they picked up five young players in the draft, and are developing a nice blend with their list.

We can debate the quality of their recruits and the impact they’ll have this year, but the fact that, other than Thomas, they’re all coming into the prime age of the careers, and play in a range of different positions, gives the list a good balance, even if some are only depth players.

I see the Power as having two options for next season – they can target big-name free agents or out-of-contract players from other clubs, or they can increase their offers to some of their up-and-coming stars.

Targeting a big name
Rory Sloane and Tom Lynch have been bandied around as the biggest free agency names for 2018, and landing either of them would be a massive fillip. Port’s midfield has some good players, but excluding Robbie Gray, I wouldn’t classify any of them as being elite (Ollie Wines may be on his way there, but more on that later).

Sloane would add this star quality, as well as freeing up Gray for more forward 50 time. He also complements the club’s contested ball winners (Rockliff, Travis Boak, Wines, Brad Ebert, Sam Powell-Pepper) and outside runners (Motlop, Jared Polec) by being able to go both ways.

Last year, the Power cobbled together a forward line mainly comprising Gray and Chad Wingard, Justin Westhoff, Dan Houston, Charlie Dixon and Aaron Young. Other than Gray and Wingard, the rest are all role players. Dixon did a good job in his first season in Adelaide, kicking 49 goals, and thrived despite the ‘small ball’ mentality. Imagine what he could do with Tom Lynch by his side – it would create a pairing of one more mobile, versatile key forward with another stay-at-home type, both of who can clunk contested marks.

Of the other free agents, West Coast defender Jeremy McGovern is another who the club should go hard at. The key defensive stocks are solid without being superlative, and McGovern would add some star factor. Melbourne’s Neville Jetta would also be an excellent pick-up – he could offset the loss of Impey, and with his improved form over the last few seasons, Port may be better placed than Melbourne to offer him a beefed-up contract.

Tenacious Western Bulldogs midfielder-forward Luke Dalhaus would be a handy pick-up too, but probably not worthy of the same coin as Lynch and Sloane.

The other free agent worthy of mention is West Coast midfielder Andrew Gaff. There are many knocks on Gaff, the main one being that the majority of his possessions are uncontested (in 2017, he broke the record for the most uncontested possessions in one season, with 502). Personally, I think Gaff is a good player, but he’s not what Ken Hinkley needs. He’s already got Polec, and after recruiting Motlop, the coach has more pressing needs.

So who presents as a realistic option to be lured to Port?

McGovern and Sloane may be tempted – the former because his brother Mitch plays for the Crows, and the latter given he already lives in Adelaide. However, to tempt McGovern, the Power would have to offer more than the recent $800,000 per season, $4 million total contract on the table from West Coast.

For Sloane, the lure of returning to Melbourne is ever present, as it is for Lynch. He’s done his time at a struggling interstate club, and may feel that the time is right to return to Victoria to play for a powerhouse club in front of packed stadiums – and, frankly, who can blame him?

Jetta may also be tempted, given his former Melbourne teammates Trengove, Watts and Dom Barry have made the move, but after his career-best season last year and having locked down the small defender spot at Melbourne, it’s probably unlikely he’d leave.

Keeping its guns
Big-name players out of contract at the end of this season include defender Darcy Byrne-Jones, forwards Jake Neade and Justin Westhoff, and midfielders Jared Polec, Ollie Wines, Robbie Gray and captain Travis Boak. Of these, the last three are clearly the priority re-signings.

However, the jungle drums are beating already, and it may be a difficult task keeping Wines – in early February, the gun on-baller stated that while the lure of Melbourne wasn’t a factor, he was “not comfortable” signing a new contract at the moment.

“As far as I’m concerned I’ve got eight months to go (on my contract) and I’ll do everything I can for those eight months,” Wines told Fox Sports News.

“I’ll look to sign when I can, but at the moment I’m just focusing on getting my body right for Round 1 and playing some good footy.”

Where have we heard that language before? Think Gary Ablett before leaving Gold Coast to return to Geelong or Bryce Gibbs before leaving Carlton to head home to Adelaide – and those are only two of the most recent examples.

The fact Wines’ recent comments differ from his publicly stated commitment to the club a few years ago could spell trouble. To retain him, a clear path to success obviously needs to be outlined. 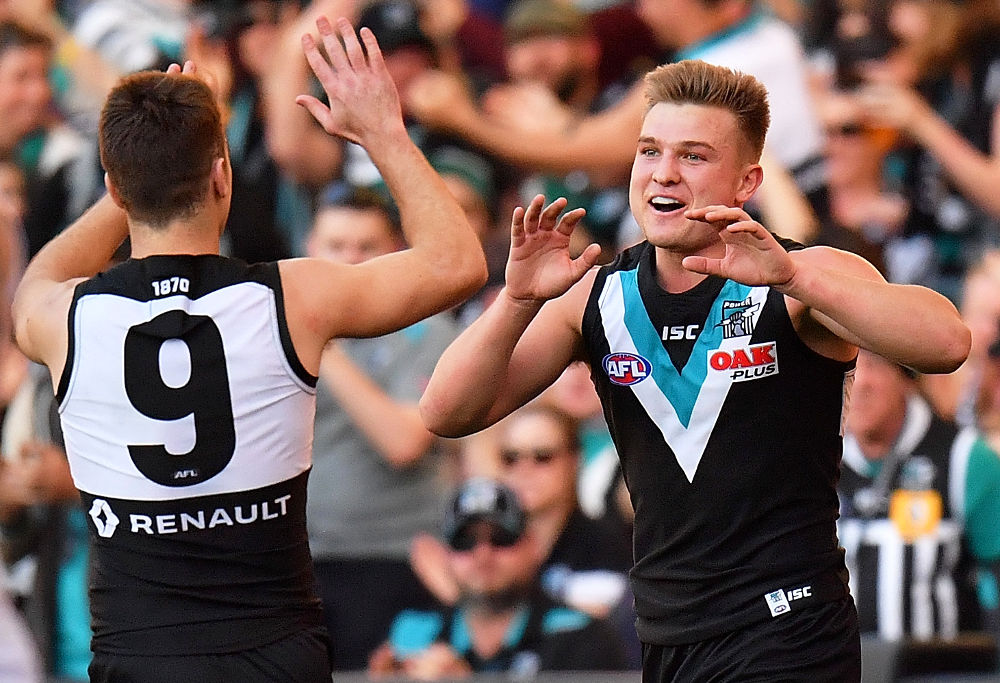 Port don’t have many players of Wines’ ilk – he’s an up-and-coming star who footy clubs can be built around, is coming into the prime of his career at only 23 years of age, and many see him as future captaincy material.

The factor going in the Power’s favour is that Wines is at the age and stage of his career where his next contract will most likely be a multi-year, big-money deal. Port has the cap space to offer him that, and should.

The same applies for Gray – he’s a genuine star of the competition, and Hinkley can ill afford to lose him. Given his skill, he will likely still demand a hefty contract but, as he’s 29, it’s less likely he would seek to move elsewhere. The club may be able to offer him a decent but not lucrative contract.

Best option
Clearly, the best-case scenario is to sign a free agent and keep Wines and Gray. However, even with a speculated $1.2 million to bandy around, that seems near impossible, with Lynch, Sloane and McGovern, in particular, all likely to command around $1 million per season.

Given where the club’s list is at, they should absolutely make a play for a free agent. There is a good blend of young talent and mature players, with an average age of 24.2 putting them smack bang in the premiership window – something they’re obviously aware of, given the recruitment raid at the end of last season.

Clubs usually spend around three to five years in the premiership window before they drop off, so Port needs to maximise their position while they can.

However, they also need to make a big offer to Wines. He’s shaping as one of those rare players – a ‘heart and soul’ type – and losing him would be a massive blow.

Ultimately, the Power need to decide whether they would rather chase a free agent or keep Wines. Sloane would obviously cover Wines’ loss (and then some), and given their list position, if push came to absolute shove, I’d probably take Sloane over Wines. But only just.

There may, however, be one factor that allows Port to both retain Wines, and acquire a big-name free agent – the club’s excellent recent record of player retention and attraction.

Although the quality of their 2017 recruits is debatable (and a topic for another article), arguably the most important factor of the recruiting spree was cementing their status as that most coveted of designations: a ‘destination club’.

This may be worth more to Port Adelaide in the long run than the impact of its 2017 recruits – if they can use this to their advantage, they could extend their premiership window and set up for sustained success, like recent powerhouses Hawthorn and Geelong.