Who is next for Anthony Mundine?

Aussie boxing legend Anthony Mundine proved in January after his stunning knockout of Tommy Browne after on two rounds that he is not quite done in the ring just yet.

So who is next for the great man who has singlehandedly ignited the sport of boxing in this country to heights never seen before?

As it stands now, three men could be the next contender for Mundine: Jeff Horn, Tim Tszyu and Dave Toussaint.

Ever since the rise of Jeff Horn last year, after he defeated Manny Pacquiao for the WBO welterweight championship, Mundine has been wanting a bout with Horn. Horn did call out Mundine when he was an upcomer in 2016, which Mundine laughed off, but now he chases Horn for one final big payday before his inevitable retirement.

This bout will all depend on the outcome of Horn’s bout with Terence Crawford. If Horn loses, he will most likely use Mundine as a rebound fight for a $2 million payday. If he wins, Mundine will have no chance. Thankfully he has backup plans.

Just recently Tim Tszyu, son of Kostya Tszyu, the most successful boxer Australia has ever had, called out Mundine via video challenging him to a fight. Tszyu wants to use the name of his father and Mundine to promote an intergeneration fight between the pair to end the reign of Mundine and ignite his own career.

Ironically enough, Mundine replaced Tszyu’s father as the best known and successful boxer in the country after Kostya’s retirement. With Tim only having a pro record of 8-0 with no world title around his waist, it’s very unlikely that the pair will ever get in the ring, but its possible. 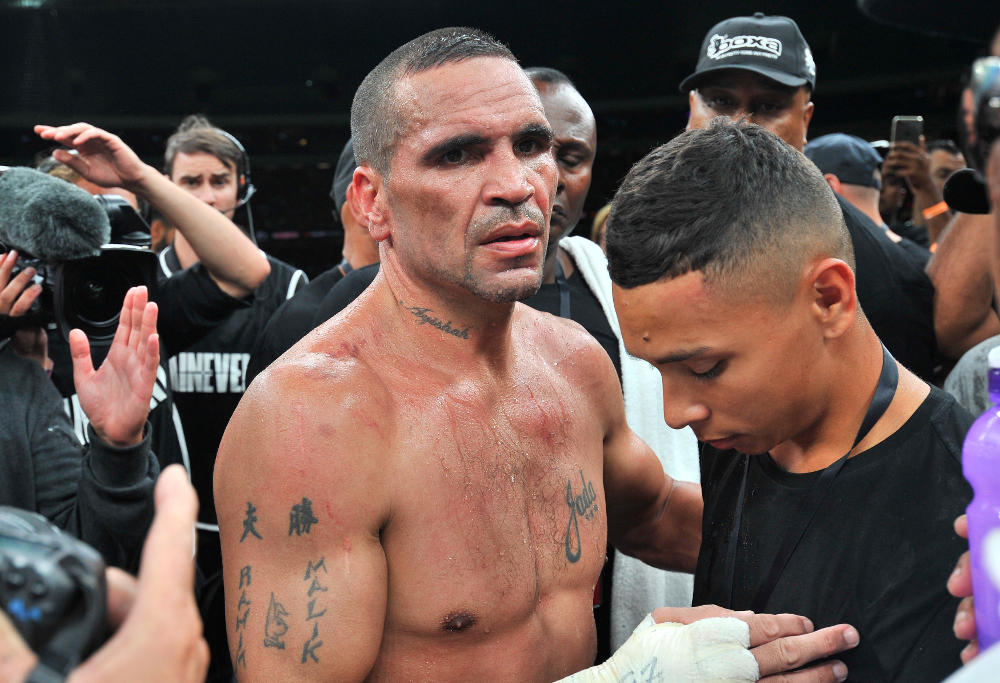 Another possibility for Mundine is Canberra boxer Dave Toussaint. Toussaint boasts and decent upcoming record of 13-0 and is the current Australian and Australasian middleweight champion.

Toussaint captured the Australasian title after defeating Gunnar Jackson, who went the distance with Mundine back in 2014. Fellow Aussie boxing world champion Daniel Geale backs Toussaint to one day become a world champion in his own right.

Toussaint’s camp has indicated that they would take a fight with Mundine “in a heartbeat“.

Boxing promoter Dean Lonergan, who promotes Jeff Horn, said that it would be one-way traffic, with Mundine hitting the canvas quickly if the pair were to ever get into the ring. Lonergan also questions if Mundine ‘has the balls” to take the fight with Toussaint.

Lonergan looks to be using Toussaint as a distraction for Mundine not to continue to pursue Horn, as he believes that Toussaint’s promoter, Nick Boutzos has the resources and ability to stage a fight in Canberra.

Boxing is a funny sport where pretty much anything can happen, so all of these fights are possible; it’s just a matter of money and who Mundine would gain the most benefit from fighting.

So it’s quite simple, using the famous catchphrase from famous WCW wrestler Bill Goldberg, “Who’s next?”.