An exhaustive search to discover the point of Robbie Kruse

Seven months ago, I wrote scathingly about Robbie Kruse after a typically ineffective and frustrating performance against Thailand.

Every Kruse-ism – leaden touches, limply misdirected passes, crosses seemingly hit during fleeting periods of total blindness – all of them were present back in November last year. Australia’s 1-1 draw with Denmark on Thursday night saw Kruse unpack the same rank bag of horrors, and just as they had after the Thailand disappointment, my fingers began to itch, aggravating to dive back into that simmering pool of scapegoat catharsis.

So, to suppress these rather unhealthy and unhelpful feelings, I’ve decided to re-watch the Denmark game, paying particular attention to Kruse, to see if my initial assessment was wilfully ignoring of all the good things Kruse did.

This is a long one, and long-winded, but if this is to be Kruse’s last World Cup game – as has been called for by a great number of fans – then it deserves a thorough post-mortem.

He began the game by fouling Henrik Dalsgaard; a bad start, really, but fouls happen. The defensive work that Kruse gets through has been highlighted as a primary reason Bert van Marwijk picks him, so we might generously chalk this up to an excess of tenacity in this regard.

In the opening stages, Kruse appeared to have been instructed to drift into the middle of the pitch when Denmark had the ball on the opposite flank. This sequence, that begins with Denmark pushing passes around on his flank, shows just how far Kruse roams inside; he ends up closer to the other wing than his own.

Sidling into the interior is a good way to disrupt central play – the areas in which Christian Eriksen is most dangerous – and having an extra body to break up central play is a good thing. Then again, it also leaves his flank wide open for an attacking fullback run and seeing as he’d literally just fouled the right fullback Henrik Dalsgaard, you’d have thought he’d take a little more care, at least for the next few minutes.

Kruse basically wanders into the middle, not marking or tracking anyone in particular, just kind of lingering around in central space as the ball is worked forward by Denmark. 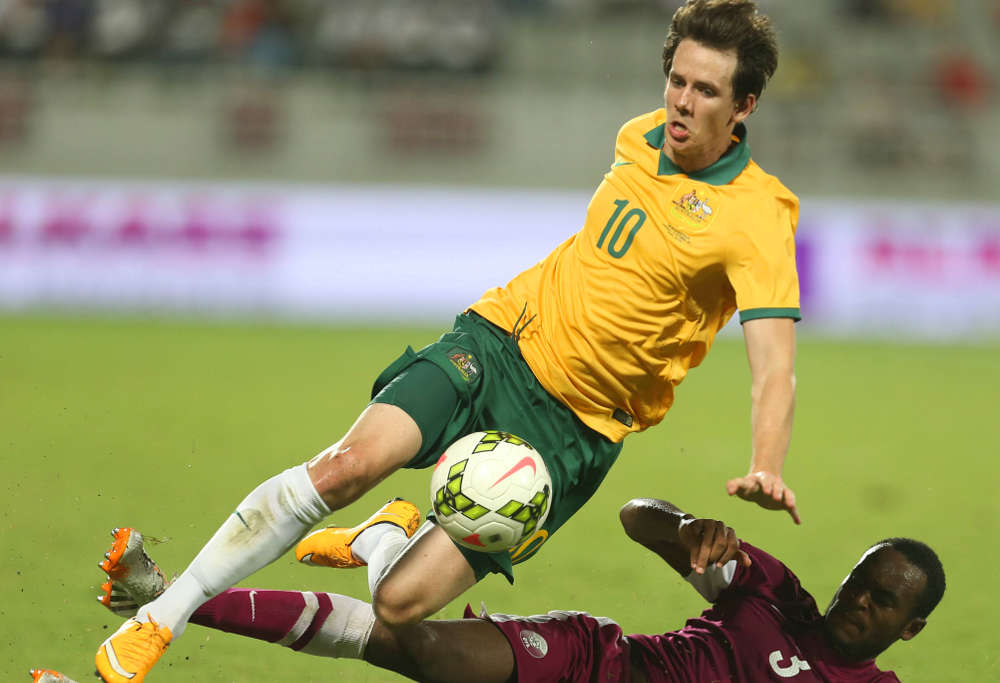 This, of course, is the moment when Eriksen scored the opener, and although Kruse can’t be blamed for that, it’s hard to work out exactly what he’s doing. In the event of a counter-attack, it’s hardly helpful to have the team bunched up like that; Kruse would be surely better placed nearer to his own wing, commanding a defender or two and stretching space out in the middle.

No counter-attack occurs, in any case. Eriksen’s run into the penalty area goes unchecked, and he smashes the ball past Mat Ryan.

Kruse’s narrow drifting pops up again, when Australia have the ball and are on the attack; immediately from the kick-off, a long ball is chipped over to Leckie, whose first touch is excellent. Leckie brushes off a tackler, and Australia lurches forward.

Kruse, from a starting position inside the central corridor, ends up tracing a run from left to right, into the right corner of the penalty area. A heavy first touch ends up with him getting tangled up with Tom Rogic, who was also charging forward to support.

It’s been identified that the wingers have been asked to tuck in, with the fullbacks providing width in van Marwijk’s system, but not to this extent.

Then, minutes later, again Kruse is seen closer to the right flank than the left, this time actually sharing it with Mathew Leckie as Australia try to work their way into a crossing position. Clearly, this is a deliberate manoeuvre; Kruse has been given license to abandon his flank to overload the other wing, offering more runners and passing options.

By the end of the clip, Leckie has basically switched flanks, having been on the right to begin with; this doesn’t seem to have been some conscious exchange of positions, though, because Kruse heads back to his flank immediately after his poor cross is skied out for a corner. This interior drifting persisted throughout the half – of course, it also allowed for Australia’s best chance, just before the half-hour mark, to fall to Kruse’s feet when he was found on the penalty spot by Leckie.

Kruse tried to take a touch when he should have shot first time, and the chance was wasted.

The first bit of actual width Kruse provides for his team comes 17 minutes in, when a raking ball from Mile Jedinak finds Kruse dashing away up the touchline. After gathering the ball, Kruse plays a terrible pass inside, giving the ball directly to a Danish defender.

Aziz Behich then revives the move, surging up down the flank, and Kruse gets a second chance, playing what could have been an excellent one-two with Rogic, largely made possible by Kruse’s lovely diagonal run, using Behich as a kind of screener.

This is how the system looked when Kruse held his position out wide, and surely it plays more to the strengths of Rogic this way; in the No. 10 spot, Rogic is best armed with activity either side of him, runners he can play into the box, or use to draw attention away from a strike.

This ideal situation is repeated seconds later, but Rogic indulges too long on the ball, rolling his studs over it, when he might have played Kruse in earlier.

This next sequence is one in which it’s very difficult to defend Kruse’s, well, defending. To begin, Kruse loses the aerial duel with Dalsgaard and is then quickly skinned by Poulsen, who dinks the ball up and over Kruse’s limp non-tackle.

I’ve illustrated in the clip what happens next; at this point, the defensive matchups are divided between Kruse and Behich on the left flank – Behich clearly has picked up Poulsen, meaning Kruse is supposed to be marking Dalsgaard. Behich even checks over his shoulder when the ball is switched to the other flank, scanning for Poulsen. Kruse, meanwhile, doesn’t look back once to see where his man is.

Once the ball is worked back toward his wing, Kruse suddenly appears, level with Aaron Mooy, marking no one, in no-man’s-land. His man, out of shot, is behind him, totally unchecked. Kruse and Mooy are bypassed, and a first-time layoff allows Poulsen – Denmark’s second-most threatening attacker –  to turn.

Now, Behich is in a tough situation, and it’s entirely Kruse’s fault. You can see Darlsgaard’s head at the very bottom of the screen; Behich is caught between Poulsen and the overlapping full back. Poulsen has plenty of passing options, but he chooses the simplest, rolling it out wide. Behich is too far away to properly contest the cross – which is excellent – and from it Denmark should really have doubled their lead.

Kruse has played the role of a traffic cone here, unaware of the most basic principles of marking, content to wander in defensively ineffectual spaces, becoming simply a minor visual obstruction to pass around. His narrowness and failure to properly assist his full back nearly costs Australia what surely would have been a tournament-ending goal.

Kruse was still making his interesting forwards runs in behind the defence: here, you can see him make one at the very left of the screen. The value of these darting gestures is hard to quantify, because so often they go unrewarded, or belatedly utilised; this is one of the reasons why Kruse is found offside so often.

The thing is, when they do come off, it’s especially grating to see Kruse’s great movement soiled by a bad pass or shoddy cross.

Speaking of shoddy crosses, with 34 minutes gone, Kruse exhibits a moment of offensive illiteracy even more clanging than his missed chance. After a bit of nice graft from Mooy to win the ball back in midfield, Jedinak passes to Kruse, with an acre of space in which to turn and run.

Denmark’s defence, a little haggardly, are tracking back in a disorganised rabble; they’ve left Rogic – probably our best long-range shooter – free and clear in his ideal strike zone. Tom has his hands up, signalling desperately for the ball. All Kruse has to do is slide a pass inward, and Rogic has a golden shooting chance. 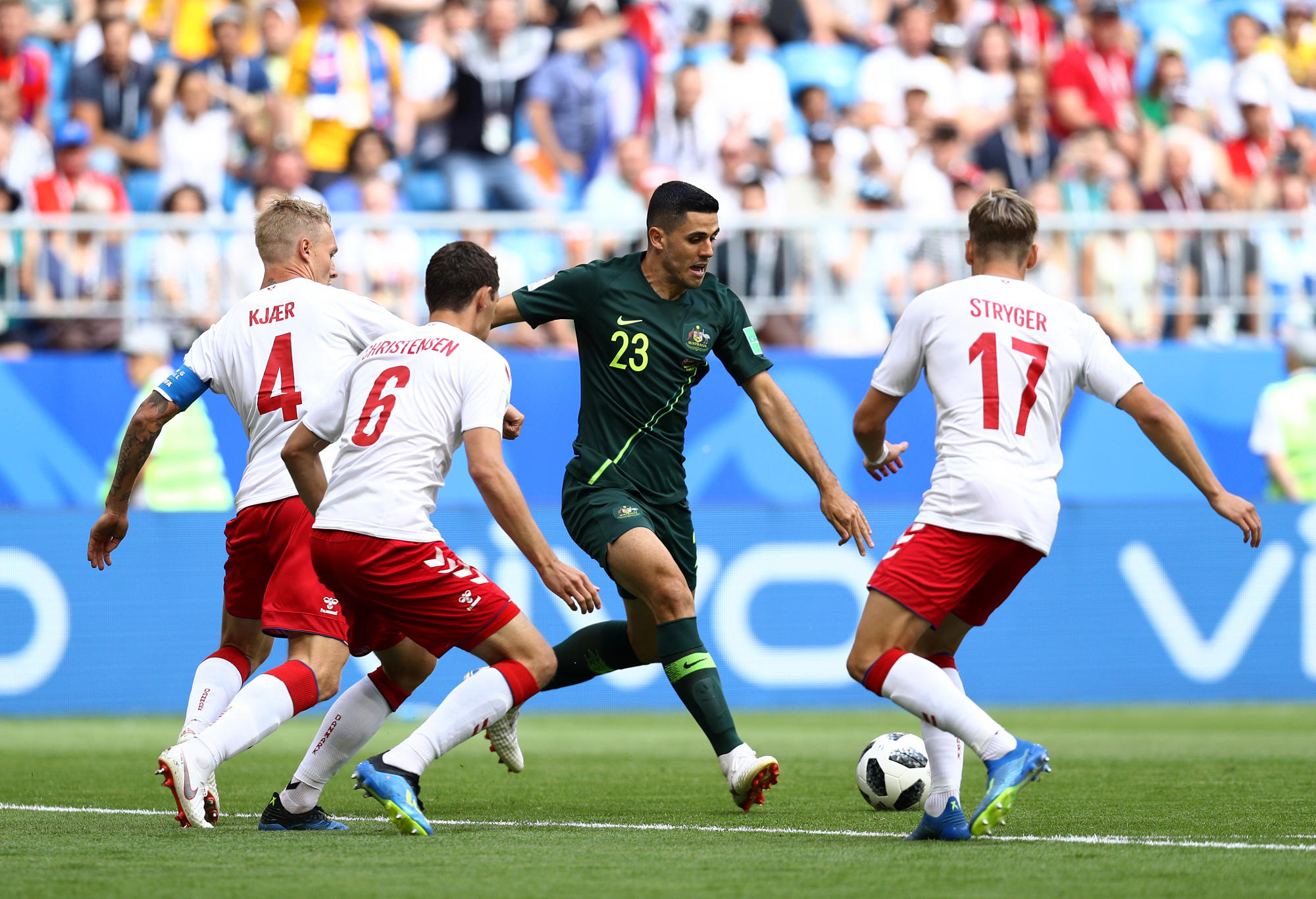 Kruse blasts his cross into the first defender instead. Cue a close-up shot of Kruse breathing heavily and looking exasperated. Cue the Curb Your Enthusiasm theme. This is why all his intelligent movement is overshadowed, because of these terrible decisions.

A beautiful diagonal run was Kruse’s first real second half contribution, in the 53rd minute; He scorches across the top of the box, and Mooy sees the pass and makes it. Kruse’s run actively contorts the defence, making space for the opposite diagonal run Andrew Nabbout makes toward the penalty spot.

If Risdon’s cross had been better, that might have been a tangible example of what Kruse’s running contributes to the attack. A few moments later, Kruse again intelligently plays in Risdon, whose cross is again poor.

He’s been let down by his teammates here, but in truth Kruse is only a secondary participant in these moves.

What else? There was a poor cross, a few routine passes made and missed, and a hang-dog expression before he was substituted in the 68th minute. When Daniel Arzani came on, a huge cheer emanated from the bank of Australian fans.

That was his race run, and Arzani looked much more likely to create something in his cameo than Kruse had in his hour and eight minutes. Kruse has made an appearance, as a starter or a substitute, in all but one of the last 28 Socceroos fixtures. In that time he has scored one goal for Australia, and registered eight assists – although only four of those assists since the beginning of 2017.

We’ve seen him play this way dozens of times, to the point where even if – unlike here – you aren’t specifically watching for everything he contributes, both tangible and intangible, you’d have a fairly good impression anyway through osmosis alone. Against Denmaark, Milligan-to-Behich was Australia’s completed passing combination, as it had been against France.

That’s Kruse’s flank, and so it seems reckless to have such an ineffective player stationed there.

I tried to change my own mind, I really did. But having pored over his performance again, minute-by-minute, I still cannot see the point of Robbie Kruse, and I hope he doesn’t start in our must-win match against Peru.