Holmes had a stymied playing career in Super Rugby. His four seasons in the competition, two each in Canberra (2012-13) and Perth (2014-15), involved spasmodic appearances – a start here and a bench spot there.

Holmes was never fully given a chance to shine in the Southern Hemisphere’s premier club competition.

Then opportunity called one day. Stade Rochelais (La Rochelle), a top-tier French rugby club, got in touch with Holmes at just the right time.

“An offer from La Rochelle came and I was not playing much in Super Rugby. I was frustrated. I just thought, if I can go over to France and play well, I will be happier,” he explains.

Unlike many other foreign players lured to France, it was not all about the Euros for Holmes.

“I didn’t go to France on much money – probably similar to what I was getting paid in Super Rugby. I wanted to go there to play and be able to prove to myself that I can play at a good level. There were doubts in me after not playing a lot in Super Rugby,” he confides.

La Rochelle clearly did not share those doubts. They signed Holmes in 2015, with the hope that their newcomer would help consolidate their Top 14 status after gaining promotion only one year earlier. In June, Holmes made his move.

It could barely have gotten off to a rockier start for him.

In their opening game of the 2015-16 season, Holmes’ debut, La Rochelle received a hiding by Clermont (44-5) on their own patch. The reaction of the home crowd set the Aussie’s mind racing.

“They were just booing, and I was like, ‘Shit, what have I got myself into?!’,” he recalls.

Thankfully, things picked up after that. Holmes was a point-scoring machine in his first season on French soil. He racked up an impressive tally of 251, the second highest in the competition. La Rochelle did end up keeping their place in the top flight too, finishing ninth.

The following year, everything seemed to click for the men in black and yellow, as they jumped from bottom-third of the table to the very top.

Ultimately, the Occitanian side lost their home semi-final to Toulon, but in three years they had risen from Division 2 to a force to be reckoned with in French rugby.

Holmes’ contributions did not go unnoticed. His performances popped up on the radar of Stade Toulousain (Toulouse), which is no small matter. Toulouse are France’s most successful club side, with 19 domestic titles and four European Championships. 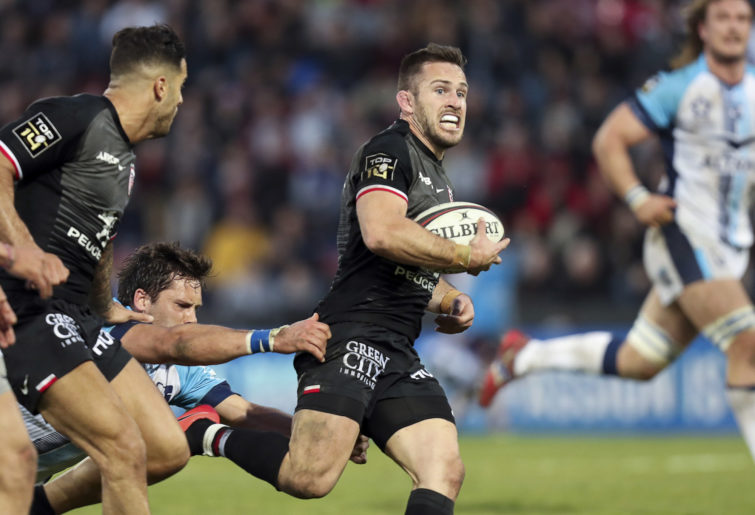 An invitation to join the storied club was too much for Holmes to turn down. He inked a deal before the 2017-18 season, and is now in his second full campaign there.

It was not just the prestige that appealed to Holmes. Historically, Toulouse prefer an expansive style of play, which he knew would suit him well.

“It felt like a good fit for me. It’s a very open, French style of rugby – we like to keep the ball moving. It’s very exciting and so far it has worked well for me,” he says.

Indeed it has. Since Holmes first donned a Toulouse jersey, both parties have prospered. His arrival coincided with a red, white and black renaissance as Toulouse jumped nine places from 12th to third in his maiden season.

The upward ascent has only gotten steeper. Three quarters of the way through the current campaign, Toulouse are basking at the summit of the Top 14 ladder.

They are currently on an 11-game unbeaten streak in the league, and are poised to go deep in the European Champions Cup after posting a 5-1 mark in the pool stages.

Holmes has been right in the thick of all of this.

Apart from a few injury absences, he has been starting at No. 10 week-in and week-out for his team.

He has been as dangerous as ever with his whippet-like darting runs and assured ball distributing. On their current trajectory, Holmes and his team-mates may get their hands on silverware before too long.

The Aussie’s form off the pitch in south-west France has been fruitful, too. Weekend escapes to various European destinations and savouring the local cuisine are two of his favourite perks of living there.

The surfing is not bad either, he notes.

The language barrier, apparently, has not caused too many problems for Perth-born Holmes. All Toulouse players from non-French-speaking backgrounds take language courses, and he claims to have gotten his Francais to a reasonable standard.

However, some of the unusual French customs have caused a head-scratch or two, he admits mirthfully.

“Some of the admin stuff can be difficult. If you go to the bank between 12 and 2pm it’s closed, which can make things difficult sometimes!”

Fluency in language and culture may not elude Holmes for too much longer as he has committed to Toulouse for a third season in 2019-20.

Could there be a return to his homeland after that? That remains up in the air. Holmes recalls an offer from the Western Force that “wasn’t concrete” before he left in 2015, but the line has been dry from the Super Rugby world ever since.

“I haven’t had any contact from anyone in Australia. I don’t really see that (a return home) happening,” he says.

“As an Australian you would like to play for the Wallabies and play international rugby, but it’s not something that I really see as a possibility the way things are right now.”

Holmes will be 30 and still in his prime when his contract expires in the middle of next year. It would be remiss of Australian Super Rugby franchises not to consider bringing him back with all the talent and experience that he offers.

But France has been good to Holmes, and he has been to it. His preference may be to stay and you would not blame him.

The Toulouse faithful would also be in no hurry to dispatch their Aussie boy with the impish grin, vertically-coiffed fringe and luminous boots. Results at the Ernest-Wallon Stadium are going far too well for that to happen.

UPDATE: Since this article was written, Zack Holmes has signed on for another two years at Toulouse.