For the first time in the history of Australian rugby league every match in one round will be played at a single venue when Brisbane’s Suncorp Stadium plays host to all 16 NRL clubs in what has been dubbed Magic Round.

The idea of playing each match at the one venue comes from the Super League, which since 2007 has held a Magic Weekend every season, with the venues alternating each year.

The initiative, introduced by the NRL 11 months ago, was initially going to be held in Round 10, but it was brought forward after a clash with Super Rugby’s Queensland Reds was revealed.

However, there is one clash with another top-level sport – the netball Q Clash between the Queensland Firebirds and defending premiers the Sunshine Coast Lightning is taking place up the road at the Brisbane Entertainment Centre on Sunday.

Anyway, let’s get to the preview of the first ever NRL Magic Round.

The gala kicks off on Thursday night with the Gold Coast Titans hosting the Cronulla Sharks who, despite missing several key players, including Matt Moylan and Shaun Johnson, managed to pull off an upset 20-18 victory over the Melbourne Storm at home last week.

The Sharks’ trip to Brisbane will come just a fortnight after they suffered a 29-6 hiding against the Brisbane Broncos during which Johnson suffered a hamstring injury which will keep him sidelined for a month.

It will also very likely mark the final time Paul Gallen plays in the sunshine state before his impending retirement at the end of the season barring the unlikely event he is called up for a State of Origin comeback with New South Wales next month.

As for the Titans, they’ll be hoping to notch up their third win for the season after falling to back-to-back defeats against the Wests Tigers and Cowboys in the past fortnight.

Friday night sees the second installment of the Cleary vs Wests Tigers showdown, with the Panthers coach looking to end a four-match losing streak for his mountain men, whose last win just happened to be against the Tigers at Panthers Stadium in Round 4.

The Panthers’ plight hasn’t been helped by a horror injury toll, with Isaah Yeo set to miss the rest of the season after suffering a serious shoulder injury in their loss to the Canberra Raiders in Wagga Wagga last Saturday.

Meantime, the Tigers will be looking to hit back after suffering their second humiliation in three weeks, going down to the Sydney Roosters by 42-12 at the Sydney Cricket Ground also last Saturday night. 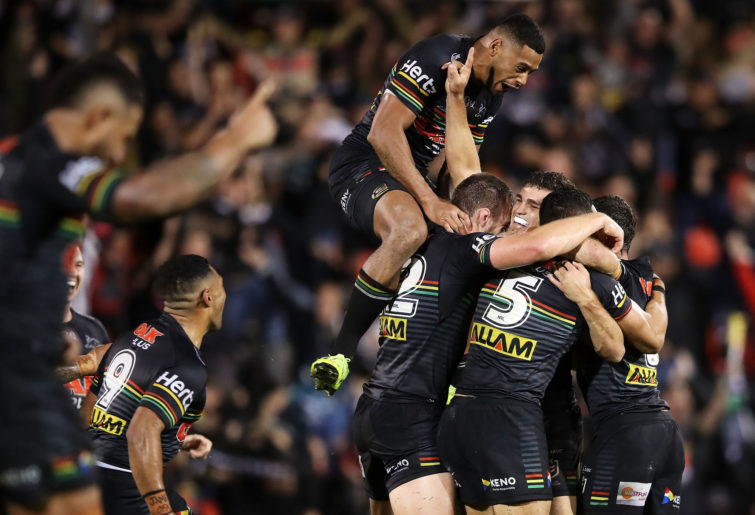 Later on, despite Suncorp Stadium being the Brisbane Broncos’ home ground, they will actually be the away team when they face the resurgent Manly-Warringah Sea Eagles in the game to be televised on Channel Nine.

The Broncos have copped plenty of criticism from all corners of the media following their dismal start to the season in which they’ve won just two of their opening eight matches and have been poor in most of their defeats this season.

Coach Anthony Seibold has responded by demoting James Roberts and Jamayne Isaako to reserve and making other changes which he hopes could belatedly kick-start their season.

Manly, on the other hand, continue to track well under Des Hasler despite a lengthy injury toll which includes fullback Tom Trbojevic and will start favourites despite their most recent match against the Broncos, in Round 25 last season, ending in a 48-16 defeat.

They were made to work hard for its victory against the Bulldogs last week, winning 18-10.

The first match on Saturday sees the Bulldogs host the Newcastle Knights, who appear to have resurrected their season thanks to victories over the Parramatta Eels and New Zealand Warriors, the latter on the road.

After copping some criticism for his poor individual performances, Kalyn Ponga had a day out against the Warriors, outscoring them with 20 points – eight conversions and one try – to their 18.

Coach Nathan Brown will be banking on another strong performance from his star player as the Knights attempt to end a six-year hoodoo against the Bulldogs, having not beaten the boys from Belmore since the 2013 elimination final.

At 5:30pm, the New Zealand Warriors and St George Illawarra Dragons will attempt to put poor losses behind them, ill-discipline from the Warriors seeing them being beaten by the Knights at home while the Dragons squandered a 14-0 lead to go down 32-18 to the Eels.

Souring the Dragons’ defeat was the cheekbone injury suffered by Corey Norman that will keep him out for at least a month, but the good news is that Tyson Frizell should be cleared to play after being poked in the eye.

In the evening the Melbourne Storm play hosts to a Parramatta Eels side which, to say the very least, have been hot and cold this season.

The Eels have not won consecutive matches since the opening two rounds of the season and have been poor in their three defeats against the Roosters, Raiders and Knights in rounds three, five and seven respectively.

On the flipside they have been impressive at their new home ground, Bankwest Stadium, racking up victories over the Wests Tigers and Dragons, having to come from behind in the latter match.

Meantime, the Storm were outplayed by the Sharks at PointsBet Stadium last start, leading Craig Bellamy to poorly describe their second half and threaten to swing the axe after three sub-standard weeks of footy.

The first match on Sunday shapes as a war of attrition, with the NRL’s best attack (the Sydney Roosters) coming up against the best defence (the Canberra Raiders).

Any suggestions the Chooks may be suffering from a premiership hangover after they lost to the Rabbitohs in Round 1 have all but been cast aside for now, with Trent Robinson’s side having won their last seven matches since then.

Against the Wests Tigers at the SCG last Saturday night they were at their devastating best, with Latrell Mitchell scoring a hat-trick of tries as he proved once and for all that he is the competition’s best player at the moment.

It will therefore take a team effort from the Canberra Raiders, who were just as impressive in their win over the Penrith Panthers, to shut him down and hand the premiers just their second defeat for the season.

The Green Machine have won their last three matches against the boys from Bondi, though all three came in the nation’s capital where they have lost just once this season, against the Storm in Round 2. 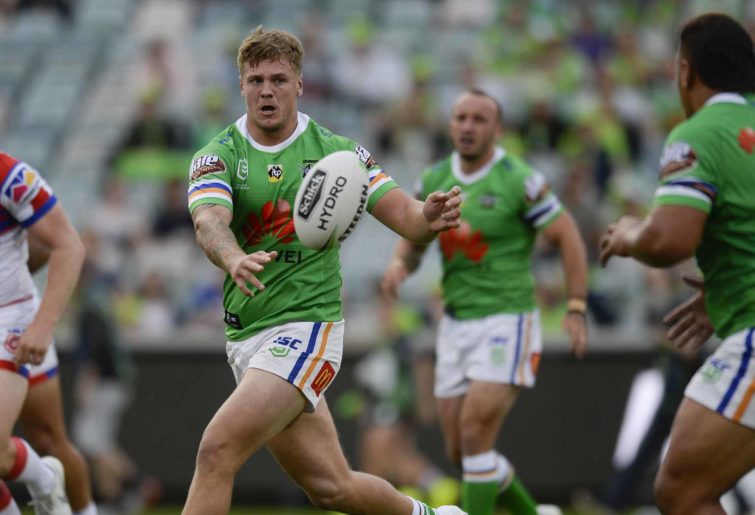 The final match of Magic Round sees Wayne Bennett return to his old stomping ground when his Rabbitohs host the Cowboys, who appear to be regaining some form after winning two of their last three matches.

If the Roosters are the team to beat in 2019, the ones to watch are the Rabbitohs, whose only defeat should never have happened after they were taken to golden point against the Sea Eagles at Lottoland in Round 4.

Otherwise they have been very impressive so far this season, last week putting the Broncos to the sword by 38-6 at ANZ Stadium in the first showdown between rival coaches Bennett and Anthony Seibold since the much-publicised coach swap of last season.

It will be the first time the super coach steps foot into Lang Park since he was unceremoniously sacked as Broncos coach last December.

With the Bunnies to return to Brisbane to play the Broncos in Round 23, this will be the first of two chances the locals will get to properly farewell their mentor, who guided the NRL’s glamour club to six premierships, the most recent of them in 2006.

On the other hand the Cowboys will be looking to claim a major scalp after taking down two likely non-finalists, the Warriors and Titans, on either side of a dismal 24-12 loss to the last-placed Bulldogs in Round 7.

It’s all set for what should be a massive weekend in Brisbane, with over 100,000 fans expected to pack the cauldron across four days of footy.

Paul McGregor’s time as coach of the St George-Illawarra Dragons has reportedly come to an end after he was sacked by the club ahead of next week’s board meeting. 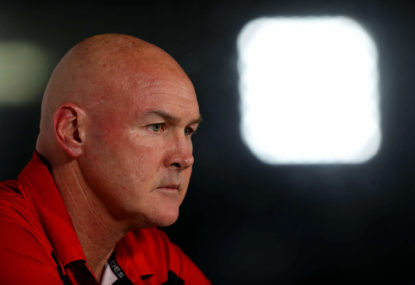 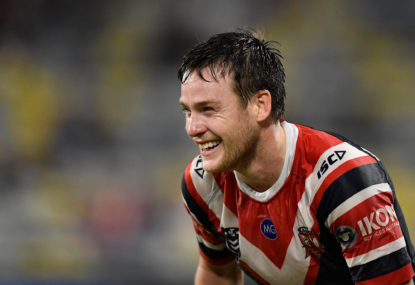 Gold Coast prop Shannon Boyd has quit the NRL to retire to his family’s farm in NSW.

The Roar’s NRL expert tips and predictions: Round 14

Teams battling injuries, COVID-related suspensions and some very important games are on the table ahead of Round 14. Here to guide you through it all are The Roar’s NRL expert tipping panel. 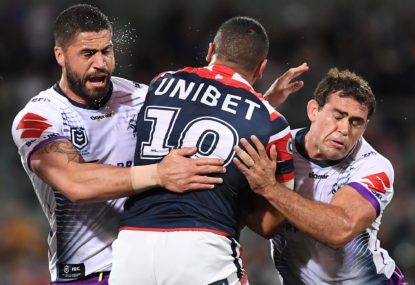 The Roar’s NRL expert tips and predictions: Round 14