Super Rugby Team of the Week: Round 13

This weekend saw the Crusaders excell as usual, the Brumbies deliver a show, the Rebels put down a marker, the Lions edge the Tahs and the Highlanders get the win.

Here’s the team of the round:

15. Tom Banks
A tough call between the Brumbies flyer and the Crusaders’ fantastic David Havili. Banks was very, very good for ACT, scoring one try and saving another with a timely tackle. Havili continues to excell on the south island.

14. Sevu Reece
Just a freakish talent. A hat-trick for the Crusaders winger, a Fijian of freakish ability. Worth the price of admission. 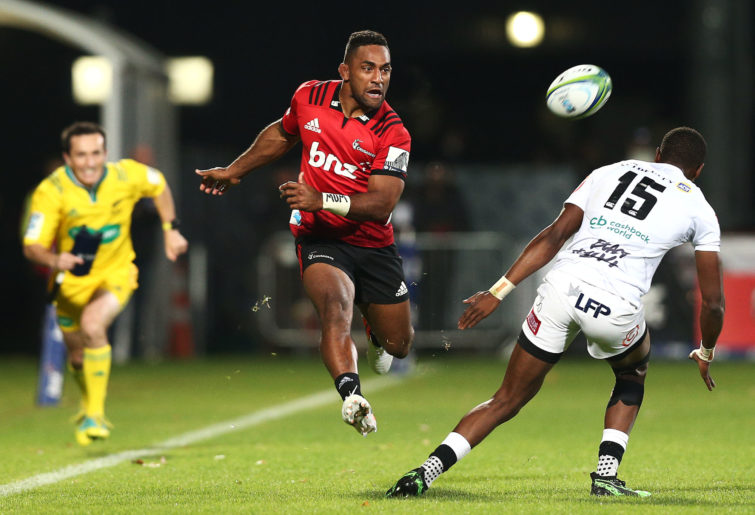 13. Tevita Kuridrani
Ran riot as the Brumbies bashed the Sunwolves. This was the Kuridrani of old as the Fijian centre was outstanding. When on song, he is one of the best threequarters in the world.

12. Anton Lienert-Brown
Probably the Chiefs most important player. Scored the vital try to help his team topple the Sharks. Has been impressive all season.

11. George Bridge
The Crusaders backline is a thing of beauty and Bridge is a vital cog. Surely his second cap for the All Blacks is not far away? Henry Speight was also in sensational form.

10. Beauden Barrett
Another tough call, but the Hurricanes playmaker was eye-catching in the win over the Blues. He bagged a try and nailed two conversions.

Special mention to Richie Mo’unga who was brilliant for the Crusaders. He finished with a brace and five conversions.

9. Brad Weber
Ran the show for the Chiefs. As captain his leadership was exceptional, as was his support play, which was rewarded with two tries. At 28 years old, worth another look at Test level perhaps?

8. Pete Samu
The big forward made a big impact against the Sunwolves. Effective both in attack and defence, Samu was everywhere on that pitch.

7. Ardie Savea
We don’t want to go overboard, but arguably the best openside in Super Rugby? Continues to deliver for the Canes week-in-week-out. Michael Hooper was back to his best for NSW too.

6. Jesse Parete
Tough, hard-working, he might not be a huge name but he gets the job. A key member of the Chiefs forward pack and an ace at set-piece time.

5. Scott Barrett
Just a pure workhorse. Never stops, never seems to tire and has a smart rugby brain. Oh for a piece of the Barrett DNA.

4. Patrick Tuipulotu
Set up Sam Nock’s try and put in a powerful scrummaging display. The Blues might have lost, but the lock was one of the best in a beaten XV.

3. Taniela Tupou
A pure wrecking-ball for the Reds. The “Tongan Thor” was handful for the Rebels, busting tackles at will and setting up Queensland’s opening try. Sekope Kepu was also inspirational for the Tahs.

2. Malcolm Marx
Was man of the match against the Waratahs. Did just about everything – intercepts, offloads, tackles and just generally lead from the front. A real warrior.

1. Atu Moli
Dented the Sharks defence with every carry and was a weapon in defence. The Chiefs prop made his mark.