Why the Wallabies' props are no longer in a bind

Take the curious case of James Johnston. Back in 2013, Johnston was one of the hottest properties in the English Rugby Premiership.

He had just enjoyed the finest season of his career with his club Harlequins, who had won the league the year before.

Johnston played tight-head prop, in which top-drawer quality was coveted by English clubs and highly rewarded in financial terms.

At six foot three and tipping the scales at over 135 kilos, Johnston cut an imposing physical figure. He and his brother, Census (a long-time stalwart of Stade Toulousain), had proven to be a fearsome one-two punch for the Samoan national team.

“I think James can go on to be the best tighthead prop in the world, I have no doubt he can”, commented the Quins Director of Rugby, Conor O’Shea, at the time.

“He is exceptional already and we are very disappointed to lose him but that is the world we live in.”

Towards the end of 2013, something had changed. Johnston signed a contract with Harlequins’ London rivals, Saracens, and the scrum laws under which Johnston had thrived underwent significant alteration.

Suddenly, instead of the four-fold refereeing entrée – “Crouch, touch, pause, engage” – there was a new format: “Crouch, bind, set”.

Few realised at that time what a huge difference the new refereeing protocol would make to one of rugby’s oldest institutions. That one innocent word, ‘bind’, embodied a sea-change in thinking about the scrummage.

Johnston had been used to bringing his size and power to bear, overwhelming opponents at the engagement and driving right through the mark.

But the new scrums were an unholy mess. Most ended up on the floor and had to be either reset or penalised. Of the 100 scrums at the 2013 Six Nations, 49 ended in collapses, 33 in resets and 39 finished with penalties awarded.

The new stability invoked by the four-letter word spelled the end of Johnston’s career at the highest level. He was a peripheral figure for Saracens, and has since journeyed far and wide to Wasps, Worcester and latterly CA Brive in the French second division.

Probably, in his more reflective moments, he still curses the apparently innocuous law-change which sent his career into a nose-dive.

‘Bind’ at a stroke turned a dynamic power-surge by extremely big men into a grappling contest and a game of more subtle leverage, checks and balances. It never suited Johnston or others like him, like legendary Wales prop Adam Jones.

In Australia, Sekope Kepu is the last of those large gentlemen whose international career had been born under the star of the old rules, but who has had to adapt.

His competitors for the Wallabies’ tight-head berth, Allan Alaalatoa of the Brumbies and Taniela Tupou of the Reds, have never known anything different in their playing lives at No.3.

The last two weeks of the Super Rugby season have given front-row connoisseurs the opportunity to examine the credentials of Alaalatoa and ‘Tongan Thor’.

For most of the match between the Brumbies and Blues, Alaalatoa found himself in direct opposition to a rising star of the All Black front-row, handlebar-moustached Karl Tu’inukuafe. It is fair to say that he won his personal contest so conclusively that it hardly mattered whether it was James Slipper or Scott Sio propping on the other side of the set-piece.

Alaalatoa really got to grips with Tu’inukuafe at a succession of scrums close to the Blues’ goal-line on the Brumbies’ own feed.

This set-piece towards the end of the first half lays out the battleground. There is no bullying power across the mark, but a great deal of jockeying for position that is visible even from the ‘wrong’ side of the scrum.

Alaalatoa first absorbs Tu’inukuafe’s initial hit, then takes an angle up and through the bind between Tu’uinukuafe and his hooker, and there is nothing the All Blacks’ loose-head can do about it. He is left looking rather sheepish, disengaged on the far side of the scrum as the referee gives the penalty.

The second-half scrums from Alaalatoa’s side illustrate the technical nuances more clearly.

Right from the start, there is a problem with the position of Tu’inukuafe’s head. Instead of tucking it in under his opponent’s floating ribs in the time-honoured ‘power position’ for the loose-head, it is clearly visible outside Alaalatoa’s right shoulder.

This has the effect of creating a big gap between Tu’inukuafe and his hooker, which is only accentuated when the power comes on. When the Kiwi loose-head tries to push forward, his head moves even further outside and away from the man next to him.

As the grappling contest progresses, Alaalatoa exploits the split with a clever change of angle. At 46:23 on the game clock, he takes a step inside with his right foot, which exposes the basic instability of Tu’inukuafe’s position. When the pressure point moves, all the Blues man can do is collapse, while the Brumbies’ tight-head remains solidly on his feet.

The climax came at a scrum in the 66th minute, with the game still in the balance.

Because Tu’inukuafe’s head starts outside his opponent, it moves further away from the centre of the scrum as more pressure mounts from both sides. 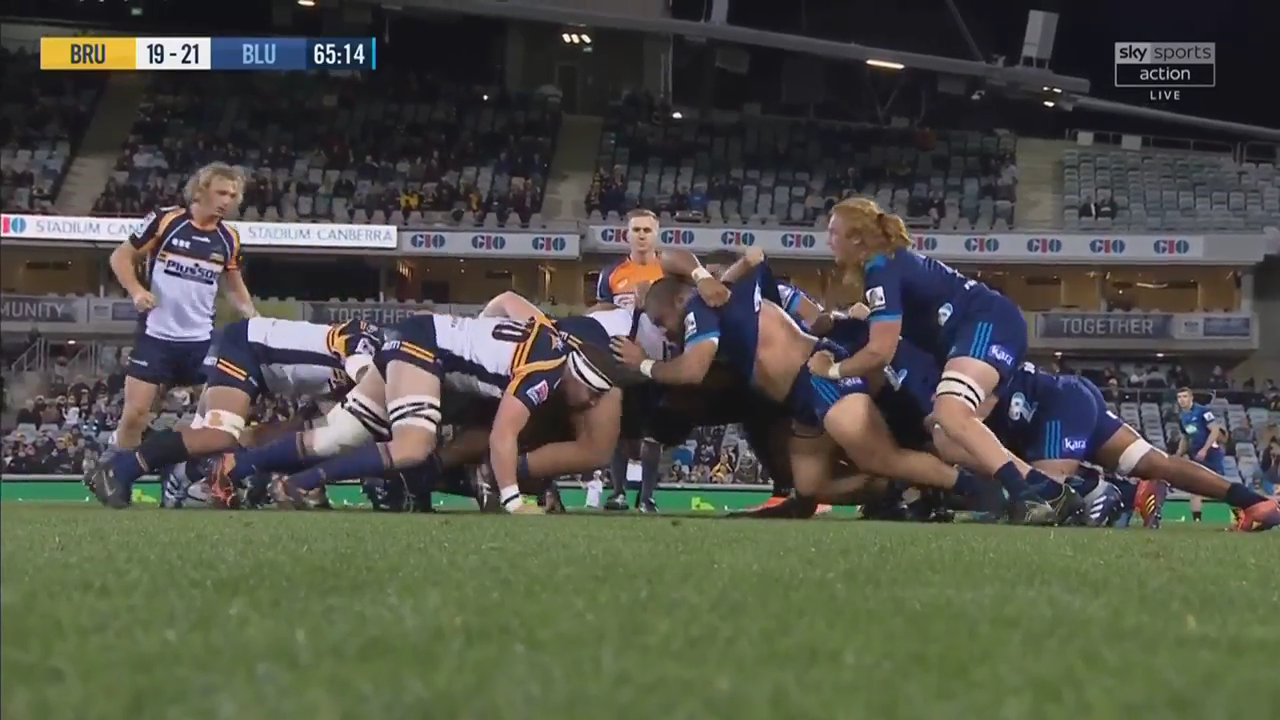 Tu’inukuafe’s hips sink towards the ground, but his chest does not follow suit in a bi-articular line. The resulting body-shape is so poor that the flanker on Tu’inukuafe’s side (Tom Robinson) has nothing to push against, and detaches from the edge of the set-piece in despair.

Taniela’s Tupou’s scrum performance against the Rebels produced more mixed results. Tupou won two early penalties against his immediate opponent (Tetera Faulkner) by shifting inside and then driving the scrum to ground as soon as he had won the first two steps on a ‘hit and chase’.

The following screenshot illustrates the ideal outcome of Tupou’s technique. 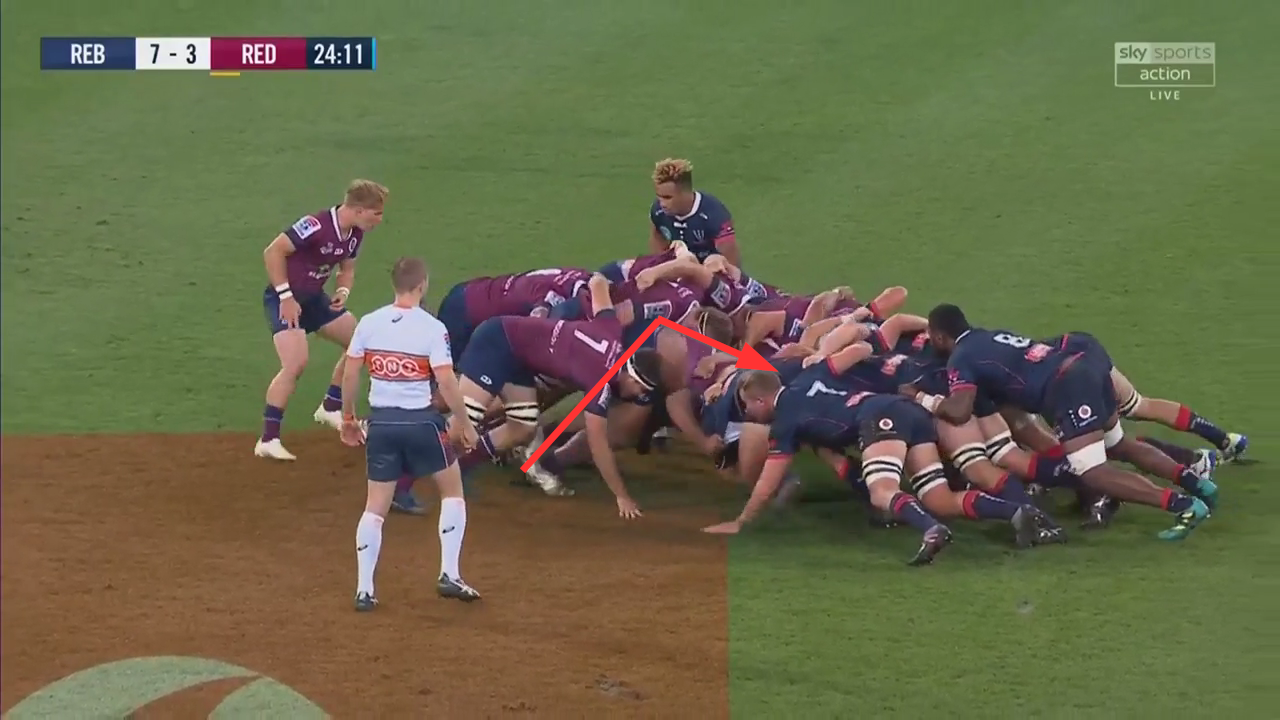 Tupou’s shoulders are below hip-height, but he is still relatively stable with his feet directly underneath his centre of gravity.

It was not all sweetness and light for Tongan Thor, however.

In this instance, Tupou doesn’t get the initial hit-and-chase advantage before he knifes down and in towards the deck. He paints a poor picture to the referee, who is able to award the penalty against him with a clear conscience. 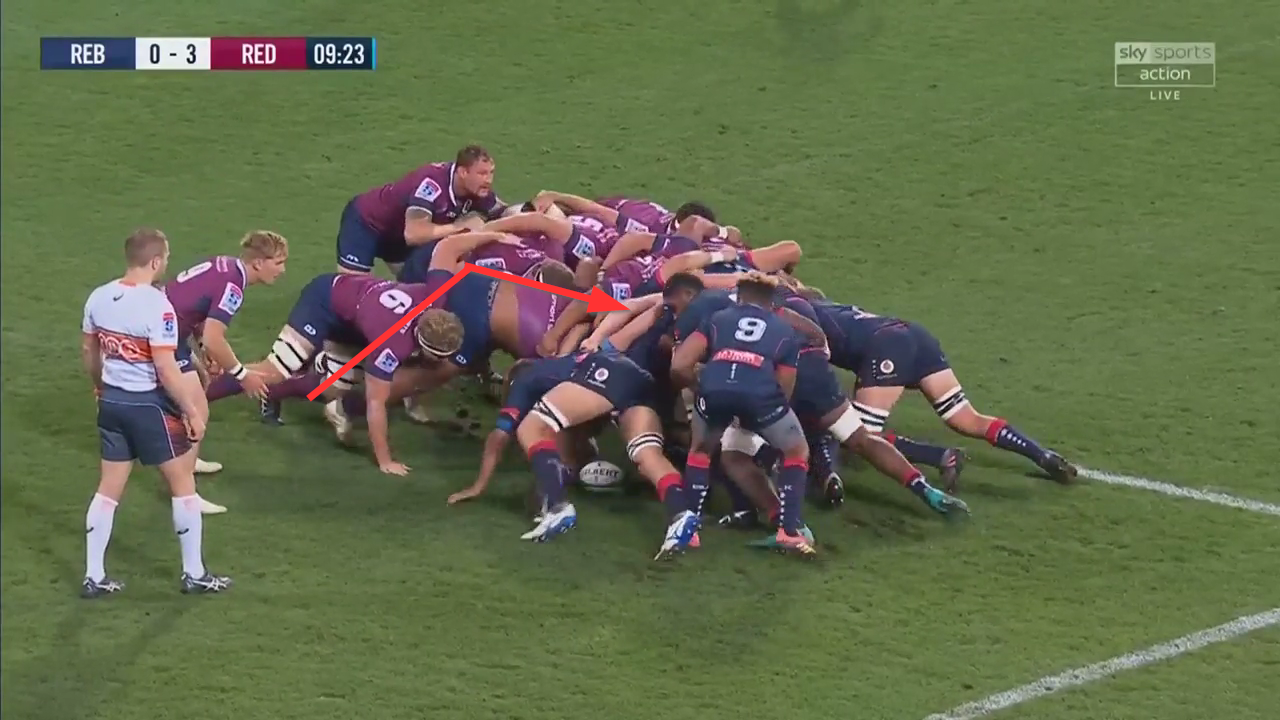 The overall results of Tupou’s technique are more unpredictable than Alaalatoa’s. There is more emphasis on winning the engagement and a more acute change of angle inside.

The Reds eventually lost a prime scoring position in the Rebels’ 22, when the fault-lines in Tupou’s technique were exposed by Melbourne’s bench loose-head, Matt Gibbon.

Gibbon maintains the better leverage in the wrestling competition after ‘bind’ and is able to exploit Tupou’s tendency to scrum inwards under pressure, even when he has failed to win the first two steps after ‘set’. 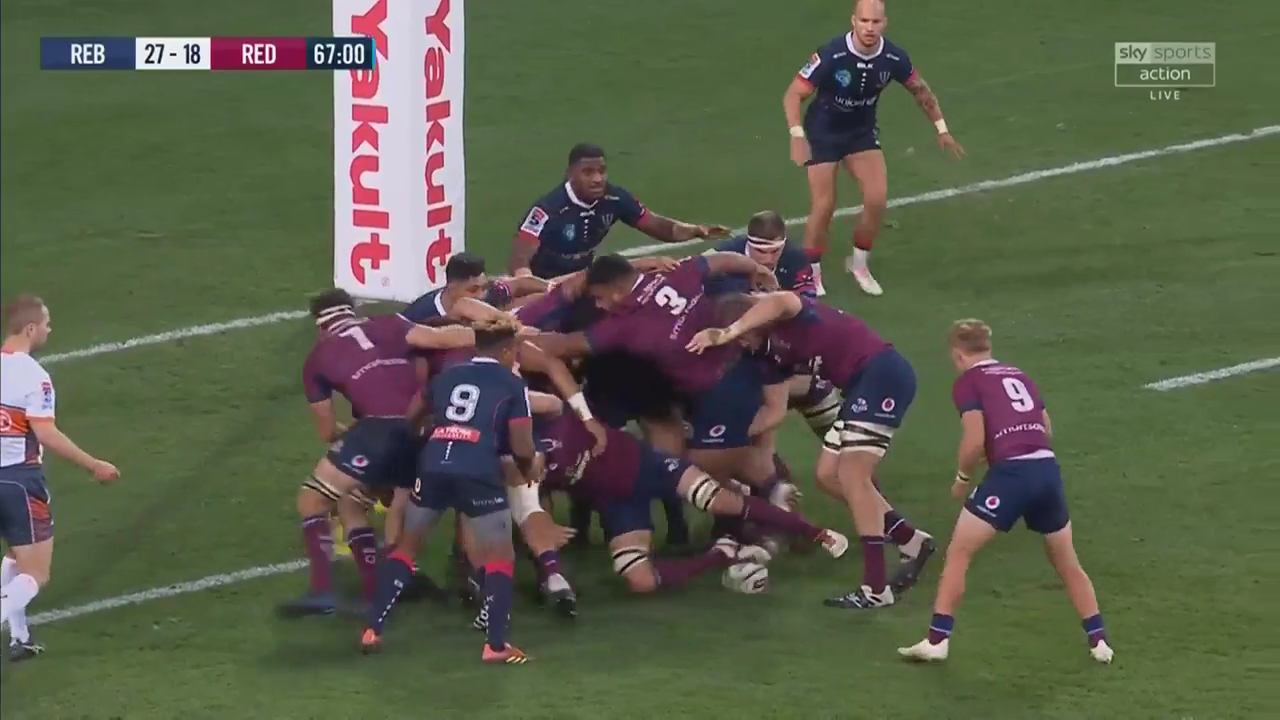 Alaalatoa stays straighter for longer than Tupou and picks his moment to change the angle more intelligently, and that makes him a more reliable scrummager.

But who wouldn’t want Tupou’s skills in the wide channels off the bench, when he can produce offloading moments such as the one which created a try for Isaac Lucas in the 38th minute?

That moment echoed his sensational run and pass down the sideline against the Hurricanes in last season’s competition.

Two of the great young hopes of Australian rugby – Tupou and Jordan Petaia – working in tandem, creating the score between them! What’s not to like?

Summary
Not all the tight-head props who began their careers under the old engagement protocol have found the transition to ‘Crouch, bind, set’ easy. Ask James Johnston.

Sekope Kepu is one of those No.3s who have successfully made the adjustment in technique, although there remains a suspicion that Kepu’s wider range of skills could be best employed from loose-head at this stage of his illustrious career.

The two main contenders to Kepu’s throne, Allan Alaalatoa and Taniela Tupou, have both grown up entirely under the new engagement process and have known nothing else.

Of the two, Alaalatoa’s scrum technique is more reliable and consistent. The Brumbies’ prop stays straighter for longer, and is less liable to be penalised for collapses and variations in body-shape by the official.

His performance against Karl Tu’inukuafe in the game against the Blues also fired a loud warning shot across the bow of New Zealand’s selectors about the fragility of the back-up strength behind Owen Franks and Joe Moody.

Australia’s propping stocks, potentially with James Slipper, Scott Sio and Kepu on one side, and Alaalatoa and Tupou on the other, are looking strong, deep and sturdy.

In a bind? Only according to the letter of the law.