This is a piece I never thought I would have to write.

But no one ever thinks the club they love so dearly and have cherished for years would be losing their way.

2019 has been a difficult year so far for North Melbourne supporters, who have watched the promise and excitement of 2018 slip away, only to be replaced with a club that appears directionless both on and off the field.

Week in, week out, I have racked my brain trying to work out what’s gone wrong and how can things get better. It wasn’t until former North Melbourne great David King spoke (Herald Sun, April 25 2019), that I truly began to listen.

“There are too many “visitors” at Arden Street,” wrote King.

“Visitors” being short-to-medium term occupants who either don’t believe in North Melbourne’s heart and south – The Shinboner – or have not embraced the clubs beliefs.

“The Shinboner is a unifying, overarching ethos that not only embraces the struggles of the past but sets the bare minimum standards that this once great football club demands.

“North Melbourne’s culture was born from the Shinboner and has always been about its people, past and present.

“Often it was all we had.

“… I accept that when discussing North Melbourne, I’m accused either of being too supportive, or turning on the club that gave me all that I enjoy. But I write this because I care.”

There have been a few decisions made over the past few years that have been particularly difficult to swallow and in my eyes, have lead up to what has happened over this weekend.

I don’t need to remind you what happened to Boomer and Co but there is one detail of the story that sticks out in my mind above all. The club made the decision to farewell our champions in the round 23 clash at Etihad against the Giants. 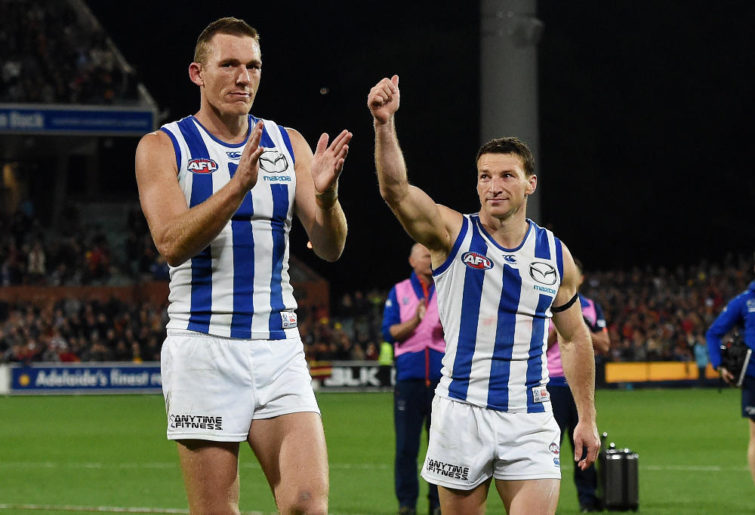 North Melbourne, however, finished 8th that year and were Adelaide bound for the elimination final.

What sort of message does that send to supporters? Simply one of surrender before the game has even arrived. Sure, as a supporter, I wasn’t overly confident going into that game, but I hardly want or expect my doubts to be echoed by the football club.

I want to know that my club is walking onto Adelaide Oval expecting a win.

The Shinboners would never give up.

But that was nothing compared to what was coming two years later.

At the end of 2018, the club ran a ‘Keep North at Arden Street Forever’ campaign, where, with the help of the entire North Melbourne family, the club successfully raised over $1,000,000 to secure the club’s future at home, in Melbourne.

Within days, CEO Carl Dilena announced the club will play an extra game in Hobart (taking it to a total four games) a year until at least the end of the 2021 season.

What a slap in the face.

You’ve just asked your supporters, many of whom would’ve given up what little money they may have, to donate in order to secure the club’s future in Melbourne, only to tell them we’re plonking another home game in Tasmania.

The main reason behind the decision was thanks to North’s great record at Blundstone and essentially notching up another “free” win for the season.

That’s already backfired; with North losing its first of four games in Tasmania for the year, meaning the club won’t win anymore there than they did last year (three games).

To add further insult to injury, we are now at the end of round 10 and the Melbourne-based club will play just five more games in Melbourne (and one in Geelong) for the year.

And to me, that’s the beginning of the Roos’ identity crisis.

Not to mention its AFLW ‘North Melbourne Tasmania Kangaroos’ team.

This is not what supporters want and not what they’ve invested decades of membership, support and finances into, because this is not who we are.

We are not a team of split alliances.

We are the North Melbourne Football Club, or so I’m told. Things must change. And that first change was made over the weekend.

You have to give credit to the club, who, with the exception of Wayne Schimmelbusch in early 1993 have amicably and respectfully split with its coaches when the time is right. I’d say if the news of Brad Scott’s exit hadn’t made it to the media, he probably would’ve been at the club until at least the bye weekend, or departed at seasons end.

And I think he deserved more than to have his departure fast-tracked, but that is the world we live in these days.

But his time was up. 10 years and no grand final appearances would suggest so.

He did take the club to two preliminary finals and along the way notched up one of the most famous finals wins in the modern era, a dramatic come from behind victory against Essendon in the 2014 Elimination Final.

Many will criticise Scott for his outspokenness, but it was somewhat refreshing in an over controlled and rather tame industry we have.

Some will believe he mismanaged player development over the years, but won’t applaud him for his success with Robbie Tarrant, Ben Jacobs, Majak Daw, Jarrad Waite, Shaun Higgins and Jed Anderson, just to name a few.

Above all, he was adored by the players, who played for him every week. And he handled himself so gracefully in his final appearance as coach of North Melbourne in his exiting press conference on Sunday morning.

Cunnington did it for Brad today. ???? pic.twitter.com/CQjsLjnqCn

But the time is right and I for one am looking forward to seeing how Rhys Shaw approaches the remainder of 2019.

I think this is the first of a few changes that need to happen and the biggest change is that they rediscover a North Melbourne focus. Only a decade ago, when the club was crying poverty, was the Shinboner Spirit thriving at Arden Street.

The club was lead by highly passionate advocates in James Brawyshaw and Eugene Aroca. Now, the support of passionate North Melbourne people is being turned away. 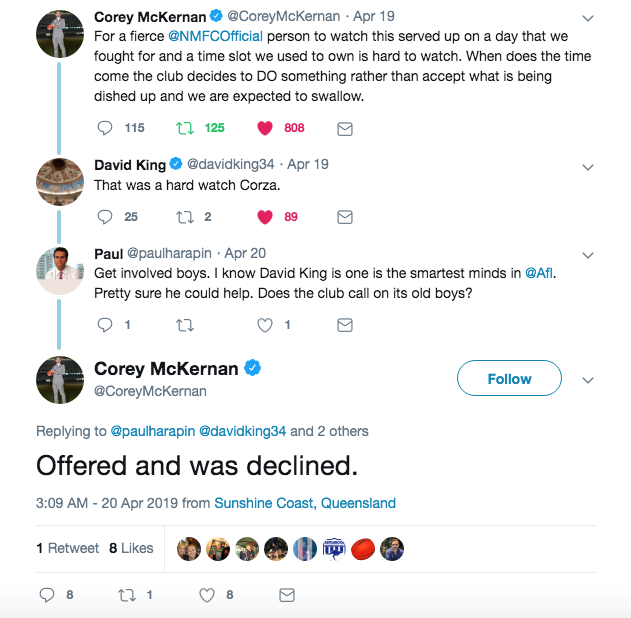 For a club that is losing their identity, that is the single worst thing they could do. If Ben Buckley and Carl Dilena are the right men for the job, then prove it.

Their absence in the media, social media and in general around the club is doing more damage than it is good.

If it were up to me, I’d trade the businessmen for North nuffies. People who would bleed for the club are the people who should lead the club, because they don’t have to money compared to other Victorian-based clubs to pay their way in the game.

While the club has knocked away criticism directed in its direction, maybe they need to look a bit deeper and realise its coming from a place of care and concern for something these critics love very much.

It has been a highly emotional few days for all those involved with the club but once the dust has settled and the club has a fair bit of work to do to get itself back on track.

The victory against the Bulldogs on the weekend was the perfect end to this chapter in the North Melbourne story.

It was also the perfect start to the next one. It was a very impressive performance on the field and it was lead with heart and soul, but the mood amongst fans at the ground was eerie.

There was a realisation that this is the end of an era.

But what might’ve been rediscovered is that little bit of Shinboner Spirit, which left the building quite some time ago and now the club has taken its first step in putting its brand back together.

And now, North Melbourne, it’s time to do so.

Welcome passionate people back into the helm. Get them leading from the front instead of allowing our leaders to disappear into the background.

Bring the club’s home base back to Melbourne. The club is in a financially stable position that it doesn’t need to sell games in Tasmania.

Now, for the first time probably ever, the club is also in a position financially that they can bottom out and properly rebuild its list.

But above all, put the Shinboner Spirit at the forefront of everything we do and let it lead us towards this next chapter for the club.

Because without it, there’s no North Melbourne.