Back in the late 1980s and early ’90s, Howard was the starting nose tackle on two Super Bowl-winning teams at the NFL’s New York Giants. At 6’4″ and tipping the scales at 122 kgs, the position was a natural fit.

Howard was one of the unsung heroes who created holes for the likes of All-Pro linebacker Lawrence Taylor to surf through and steal the glory with a highlight-reel tackle or quarterback sack behind the line of scrimmage.

He turned up for every day of hard, physical labour without complaint. He was ready to get down and dirty on every single play. Howard was blue collar to the bone:

“For me, the whole game is right in front of me. The Nose Triangle we call it. I see both guards and the centre and nothing else. That’s where I sit, six inches from leather and bad breath…

“Sometimes I try to get a good blow and start breathing really hard and puke on the centre’s hand as he goes to snap the ball. I did that in college once. That really discouraged the guy.”

Sam Cane would probably sympathise with Howard, because he shares the same attitude to the game he loves. He shows up every day, he does his work, he eats the pain while creating opportunities for others to shine.

He has also suffered a serious spinal injury because of the way he plays. Where Howard experiences lumbar symptoms to this day because of the repeated batterings he took in the middle of the line, Cane’s problems were higher up – he broke his neck on October 2018 in the All Blacks’ 32-20 win over the Springboks in Pretoria.

After a heavy collision with South African loose forward Francois Louw, he was left lying prone on the ground, motionless. He had sustained a small fracture in the vertebrae on the lower right side of his neck. By a stroke of sheer good fortune, he could still feel his fingers and toes, and had avoided serious nerve damage.

Only seven months later, Cane was back on the field playing for the Chiefs after what he laughingly called his “wee sabbatical”. Beneath the surface, he knew how close he had come to the fate of Blues halfback David Gibson, who underwent the same surgery and was never able to play again.

At the same time, during his enforced absence he was forced to watch his principal rival for the New Zealand openside jersey, the outrageously talented Ardie Savea, become the outstanding number 7 in Super Rugby 2019:

“Three or four years ago I probably would have looked at it like ‘oh man, that sucks’. But Ardie’s been impressive to watch, and for me now it’s what a challenge to come back, and I will have to lift and play better than I ever have done before.”

There is a good chance that Cane may not have to worry. Since he has returned to the Chiefs’ starting line-up, it has been alongside the side’s other primary openside flanker, Lachlan Boshier, rather than in replacement of him.

The Chiefs have gone from strength to strength since Cane came back, against the Reds in Round 15, to form a potent back-row partnership with Boshier and number 8 Peter Sowakula. They have won three straight games to gallop into the playoffs, including a barnstorming comeback to beat a full-strength Crusaders in Suva, and a 59-8 thrashing of the hapless Rebels in Melbourne in the final game of the regular season.

They have only conceded an average of 16 points per game in that run as the defence has hardened, and the back-row combination raises the tantalising prospect of Cane forming a similar alliance with Savea at the World Cup.

It is Cane’s blue-collar attitude, and his willingness to work significantly in the background rather than the foreground, which would make such a combination tick over.

Cane is a throwback to the old idea of ‘the fetcher’. Nowhere does this attitude show up more than in his defensive work, both in the tackle and at the ruck after someone else has made the initial hit.

According to my stats, Cane makes more offensive tackles (just over 50%) than any other number 7 in international rugby – tackles that not only stop the ball-carrier in their tracks, but make them think twice about taking the ball up again.

Here are a couple of big stops at first phase set-piece from the games against the Rebels and Crusaders. The first is on Rebels centre Billy Meakes from a lineout:

The second stop is on Crusaders number 12 Ryan Crotty from a scrum:

In both cases, the offensive pattern has been stopped at the source and will need a major rebuild over several phases in order to regain momentum.

Defensive teams are able to feed off Cane’s offensive tackles to turn the ball over. In the following example, Crusaders rookie openside flanker Billy Harmon is cut in half by a Cane exocet, and Boshier is on hand to win the turnover at a tackle situation which has been delivered on the Chiefs’ terms. It is a great example of two 7s working together in tandem!

Events like these are imprinted on a player’s memory. Harmon dropped the ball in front of Cane the next time he was confronted by his opposite number. He knew what was waiting.

The little details at the start of a play can have major repercussions further down the line. Cane made two super stops at the first phase against Melbourne, which had an exponential ripple effect on the two following phases.

In the 12th minute, he put big number 8 Isi Naisarani on the deck from lineout:

Cane finishes quite literally on top of Naisarani in the collision, and that causes a big problem with the placement of the ball. The Chiefs use the precious time bought to fill up on the defensive line: 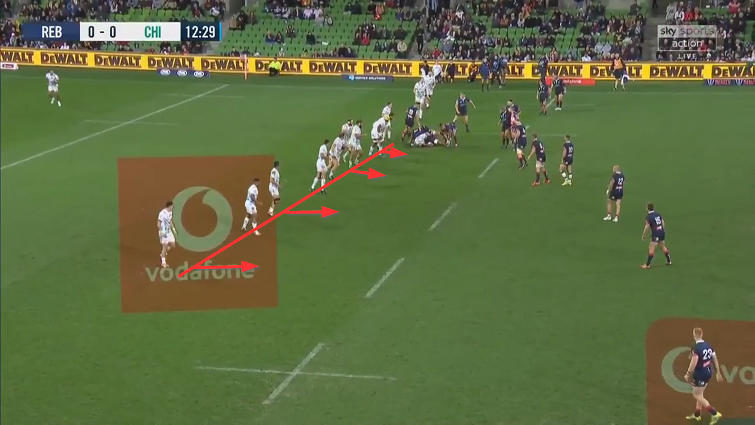 There are no fewer than nine defenders massed to the openside on the second phase when Will Genia goes to pick the ball. The final outcome can be viewed on the highlight reel – Quade Cooper ends up taking an option where the risk factor outweighs the reward:

Cooper kicks into a densely populated backfield, and ex-Rebel Jack Debreczeni launches a counter down the middle of the field. The move, which was created by the Cane hit on Naisarani, is appropriately finished by the same player.

The play was essentially duplicated in the 21st minute:

This time it is another of the Rebels’ big runners (Reece Hodge) who is stopped in his tracks by Cane. The first cleanout player (Naisarani) notably has to take one step back after the collision, rather than propelling forward through the tackle site.

The result is an organised defence on the next phase: 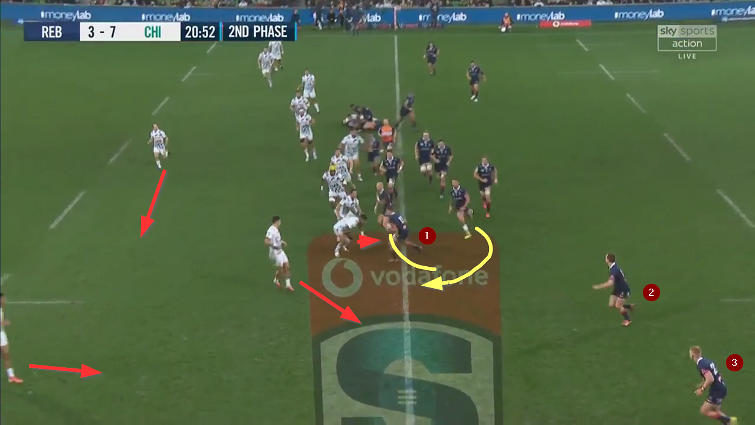 The Rebels are looking for Quade to get a second touch off Tom English (a play they had already run on one previous occasion) but the Chiefs have all of the bases covered.

The final outcome can be viewed at 1:13 on the highlight reel, with Scott Stevenson blocking Cooper’s kick to the corner and picking the ball up to run away and score. But the try would not have been possible without Cane’s initial stop on Hodge.

Another classic tell of the top-class 7 is the number of double involvements in the same sequence of play:

Cane is worked off the ball by the Crusaders’ cleanout but comes back for a successful second shot via a counter-ruck on Richie Mo’unga.

Even this effort however, was overshadowed by a spectacular game-winning double jackal – on two consecutive phases, with the match still in the balance near the Chiefs’ goal-line:

There is a definite suggestion that Cane has adapted his on-ball technique since his injury. Instead of hanging on grimly and absorbing the punishment on his neck and shoulders as David Pocock has done so often in the past, Cane looks to scoop the ball out in shorter time, before the cleanout vultures descend. 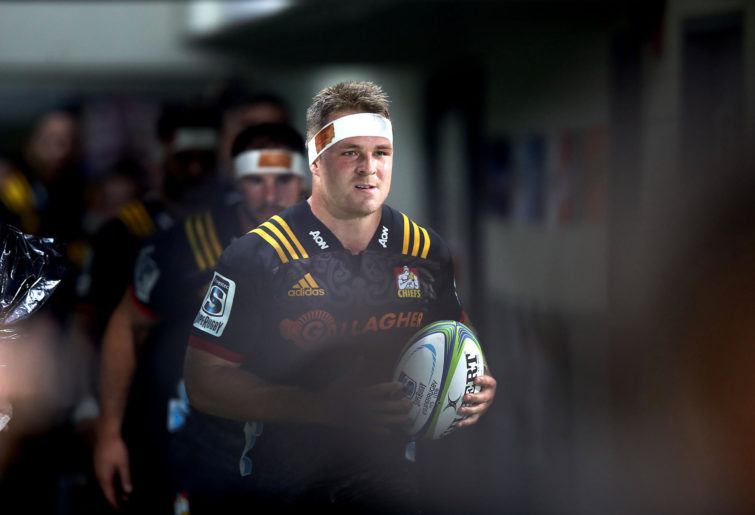 Summary
The high-class blue-collar operators in collision sports, like Erik Howard and Sam Cane, often pass unheralded – but the coaches know their worth.

They are selfless in their attitude. Howard occupied two or even three blockers at a time and opened up lanes for his linebackers to pour through to the runner or the quarterback. Cane makes offensive tackles which either create turnovers directly, or indirectly over the next couple of phases.

What he does leads to tries, but he is happy staying out of the limelight.

Both Cane and Howard paid for their approach with serious injuries, but they are the players no team can afford to do without – at least not if they hope to succeed consistently.

The long-term injuries to Cane and David Pocock have rightly raised the welfare issue of the jackalling-cleanout equation in the professional game. Maybe we will see more pilferers adopting the Cane ‘scoop’ in future times to lessen the time spent in hard contact.

The injuries to those two stars have also had the effect of highlighting the need for more than one player with a number 7 skill-set on the field to share the load at the defensive breakdown.

For Pocock, it is Michael Hooper in the Wallabies. For Sam Cane, it is Lachlan Boshier since his return from injury with the Chiefs. It could easily be Ardie Savea with the All Blacks at the World Cup in Japan.

You cannot have enough people willing to sit next to “the smell of leather and bad breath” on a rugby field, even in the sanitised era we inhabit today.