What are your hopes for the A-League next season?

The June 30 deadline for A-League independence is upon us but one group that always seems to be ignored when it comes to what we actually want from our football is the fans.

Will the A-League be fully independent of Football Federation Australia’s control come Monday morning? I have my doubts.

And if we want a reminder of how long it takes for anything to change in Australian football, let’s use Wednesday night’s FFA Cup draw as a barometer.

When last season’s Round of 32 was scheduled there were complaints about a draw which by design ensured three A-League teams played off against three other A-League opponents.

And this season? Sydney FC takes on Brisbane Roar, Perth Glory will host Western Sydney Wanderers and Melbourne Victory face off against the Newcastle Jets.

Why does the FFA persist with a seeded fixture list instead of conducting an open draw? Because little pressure has been brought to bear on them to change it. 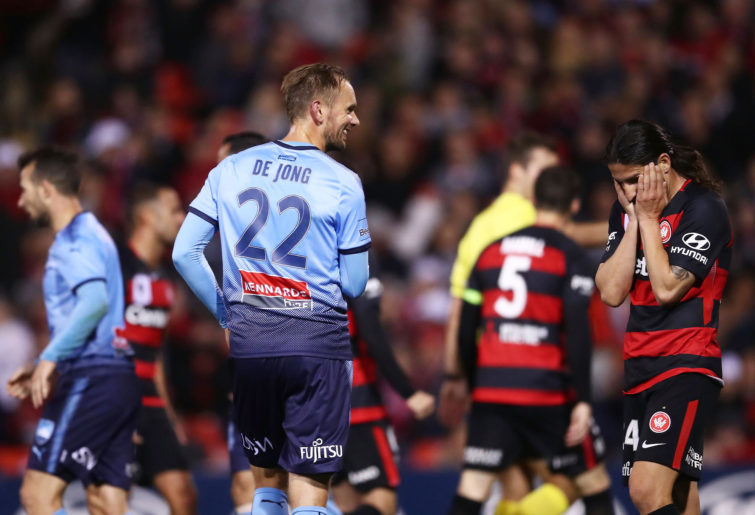 Can anyone explain the FFA Cup draw? (Photo by Matt King/Getty Images)

And the chorus is unlikely to be led by lower-league teams guaranteed the chance of a money-spinning run to the semi-finals.

So it is we’re left with a roundabout approximation of a knock-out competition that neither stirs the masses nor produces genuine – and genuinely romantic – cup runs.

And that status quo might have been acceptable as long as Fox Sports was willing to pay the cost of broadcasting the games. But is that still the case?

If not, and the FFA Cup ends up on SBS or Twitter or wherever else in the foreseeable future, are football fans not entitled to ask whether a seeded draw is still the way to go?

“Personally, I’m a massive supporter of A-League teams being drawn against member fed clubs in the round of 32 and played at the member fed home ground,” tweeted Brisbane Roar’s chief executive David Pourre during the week.

“It would give that local club a great boost financially (gate sales, food and bev etc) while also taking the professional game to the community”.

And Pourre knows a thing or two about trying to connect with the community.

He’s one of the shrewdest operators in the business and he’ll be watching at least three of Brisbane Roar’s A-League games from the compact Dolphin Stadium in Redcliffe next season.

There are a few reasons that make the move a no-brainer.

The first is money. The move will save the Roar a considerable sum of cash next season.

The next is leverage. The sooner the Queensland government wises up to the fact their stadium rental deals are bleeding clubs dry, the quicker something can be done about it.

But the last reason – and perhaps the most important for fans – is optics.

A small crowd looks on during the round 2 A-League match between the Brisbane Roar and Adelaide United at Suncorp Stadium in Brisbane, Friday, October 13, 2017. (AAP Image/Darren England)

Yes, the move will inconvenience some local fans and it’s true that not everyone was universally pleased with the announcement. But that’s football.

Brisbane Roar should be applauded for trying something new instead of being complained about in hindsight for doing the same old thing.

And with so many questions around how the game will be run in future, it’s got me wondering what it is you’d like to see from our game over the next 12 months?

Personally, I reckon we finally need to see an end to the internecine politics and more of everyone in the game pulling in a mutually beneficial direction.

And that includes supporters. Football fans are quick to complain but the reality is that unless we all make an effort next season there won’t be an A-League to speak of in the near future.

It’s high time a few of us acknowledged that. Including perhaps the most important group of all – those running the game.