Tribal Sports Group will host a blockbuster #FootballForFires friendly at ANZ Stadium on May 23 and founder Lou Sticca has some interesting thoughts on where our football is headed.

Sticca, who’s had a long and storied history in the Australian game, is perhaps best known as the player agent who brought superstars Dwight Yorke, Alessandro Del Piero and Shinji Ono to the A-League. More recently, he’s put on several huge exhibition games, bringing the likes of English heavyweights Manchester United, Tottenham, Arsenal and Chelsea to Australian shores, and Sticca’s next move will be to host a friendly in Sydney to raise funds for Australia’s bushfire relief and thank the thousands of volunteers who have helped fight the fires.

I had a chat with him recently before I headed off to Japan – and before the #FootballForFires game was announced – and he had some thought-provoking things to say about the A-League and the direction our game is headed. Including, it must be said, some interesting ideas around exactly what time of year the A-League season should take place.

Mike Tuckerman: Lou, how do you see Football Federation Australia operating after the recent changes?

Lou Sticca: I like the look of the FFA going into 2020. I’m impressed with Chris Nikou, who I believe is a low-key operator in the public eye but seems to have already presided over many changes at a board and administrative level and has helped facilitate the move to an independent A-League.

Firstly, bringing on Mark Bresciano and Amy Duggan onto the FFA board has started to fill the void of football nous that many FFA Boards previously have been criticised for lacking.

Appointing James Johnson as the new chief executive is again a strong football appointment. James has a long career in football and from a management view is arguably the most qualified for the job, perhaps matched only by Brendan Schwab. Having worked at the AFC and then FIFA means James brings a great understanding of the world game, and there’s a hope he can transfer that experience into his dealings with Australian Federal and State governments to secure better support for stadiums and training facilities for our elite and community programs.

Mike: The A-League has experienced plenty of highs and lows over the past 15 years. What do you think we need to do in next 15 years to take the competition and other tiers of the game to the next level?

Lou: For starters, I would seriously consider moving the A-League away from summer (October to May) and instead move to a winter (April to October) format. We are part of Asia and as such our league should run concurrent to the major leagues such as Japan, China and Korean leagues.

Mike: That’s a major shift. Won’t there be pushback from those who don’t want to go head-to-head with the AFL and NRL?

Lou: Summer in Australia is for travelling, holidays, BBQs and loads of outdoor fun. It hit me a while back when I was in car with good friends from Melbourne Victory as we drove to Geelong to watch Western United host the Victory. We drove over the West Gate bridge and to see so many watercraft on the bay and people on beaches enjoying the weather really resonated with me.

Add to that the temperature at some games in recent weeks in Adelaide and Perth, where the quality of the football was affected by the overpowering heat. Why are we competing with mother nature? It’s crazy!

In Melbourne, our citizens follow their team sports in winter. Summer in Melbourne is about ‘events’. It is for Horse Racing in November, Test cricket in December, Tennis in January, Formula One in March and so on. In other states, the weather is an even greater factor.

Honestly, we expect Sydneysiders or Brisbanites to drop going to their magnificent beaches or waterways to go to the A-League? It’s a tough ask.

Moving to winter allows football here to align with Asia, helps grow opportunities for A-League clubs to recruit foreign players from European clubs who may look to loan their younger players or those who got little game time in their season and makes it easier for children playing in the winter teams to stay in football mode by going to A-League games.

The reality is this: stay away from summer and the take-up for A-League games will grow. If you look at the statistic of 1.8 million registered players of football that our game is so proud of, it’s safe to say most of that 1.8 million play their football in winter.

So, given those 1.8 million registered players are already in football mode, surely that will make it easier for them to follow their A-League club at same time?

Mike: What else do you think needs to happen to help the game grow?

Lou: Promotion and relegation must happen sooner rather than later. Once this expansion phase is completed, by that I mean, taking the A-League from ten to 11 then to 12 and in the next stage to 14 (teams), then the second division must be launched. 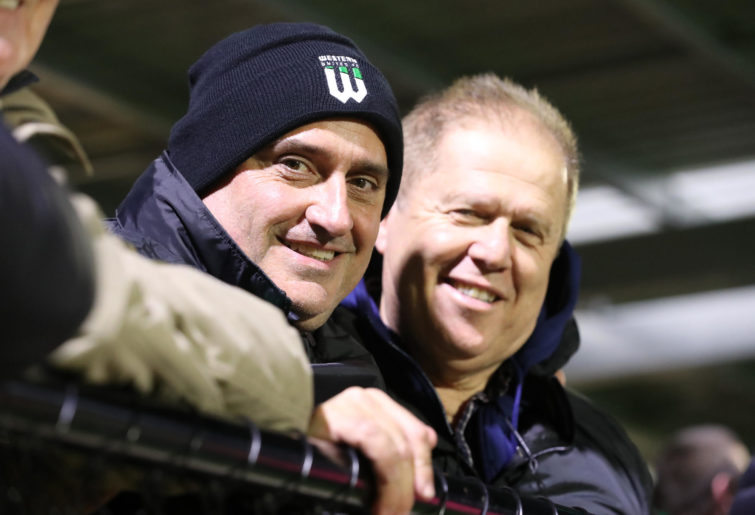 Given the uniqueness of our league spread over such a huge continent and with such a small population, we need to come up with the right strategy and formula for promotion and relegation. Perhaps those clubs to be promoted and relegated are adjudicated over two seasons, not the normal one season to ensure we get the right teams coming up.

But what is clear is that there are now perennial cellar dwellers in the A-League and that they need to be jolted into action. Football fans all over the world start every season with high hopes, whether it’s to win promotion, win a league or win a cup, fans need to dream their club is going to have a great season. In the A-League right now, there are clubs who have low expectations and that is not compelling enough for fans and sponsors to support their club week in, week out.

Mike: You helped Western United enter the A-League as Melbourne’s third team. Are there any potential new or existing clubs in Melbourne that you feel could step up to A-League?

Lou: I think South Melbourne could, certainly. However they need to move away from just being South Melbourne and instead become the club of the southern area of Greater Melbourne.

It’s not a play on words but a genuine geographical move. I don’t think that South Melbourne’s original bid was ever going to get up because it was based on being in Albert Park, which is only two kilometres away from AAMI Park. FFA admitted Western United for a number of key reasons, one being they have a huge geographical and highly populated catchment out west and secondly their game-changer of building of dedicated privately-owned football stadium. Western United will grow into a huge club in the next five to ten years.

South Melbourne has history, that’s true, but they need to get out into the epicentre of the South-East and create their own geographical and population catchment, much bigger than the historical base they had in past.

I would be targeting land in areas like Moorabbin to build their own stadium. South has many influential supporters that could work to make this happen. It’s imperative, like we did at Western United, to stay away from Melbourne Victory’s turf.

Victory own the CBD, they have a bolted-on membership and corporate base and to take them on is crazy. I like the passion of the South Melbourne board, I urge them to be bold and ensure their club will play a huge part in our game for the next 50 years, and that means repositioning their club geographically.

Mike: What about other states? Who could compete in A-League in the next few years?

Lou: Perth could and probably should have a second team. But then there is a solid argument that so should Adelaide and Brisbane too. The bids will come thick and fast if the fundamentals of the game are clearly implemented.

Mike: Do you think we have a genuine shot at the Women’s World Cup in 2023?

Lou: Absolutely. With James Johnson in the chief executive role at FFA, who better to work the process of winning the confidence of the people who will vote? James will know most of the powerful people on a first-name basis. Our (combined) bid with New Zealand will be really attractive to FIFA.

If you look at the other bidders, they have all had Men’s World Cup tournaments so it is important that FIFA is pressured into taking Australia seriously, to use their words, ‘for the good of the game’.

Mike: Speaking of women’s football, who’s the stand-out candidate to coach the Matildas after Ante Milicic hands over the reins?

Lou: There is only one candidate and that is Joe Montemurro, who is currently head coach of Arsenal’s women’s team. Joe is smashing it over in Europe and was short listed for the coaching job at USA women’s national team. It is crazy for Australia not to tie him up ASAP. Think of Australians flying the flag globally in football as coaches and there are two that stand out, Ange Postecoglou and Joe Montemurro.