Why the Wallabies need their big winger back

There was no loud banter, there was not even an audible gasp. I only remember the stunned silence as the 2005 Wallabies walked out of the tunnel on to the hallowed Millennium Stadium turf to play their tour match against Wales.

As the players gathered together for the national anthems, the Welsh supporters began to rediscover their voices. The topic on the lips of most was the size of Lote Tuqiri, the Australian winger-cum-centre.

Lote was listed at 6’3 and about 100 kilos, but in real life, he looked a couple of sizes larger than either of our second-rowers on the day, Robert Sidoli and Ian Gough. They actually had to look up to him.

It was symbolic of the advanced thinking of Australian teams of that era. It is almost impossible to recall a small Australian winger in the first ten years of professionalism. The names roll off the tongue as easily as they dropped off the factory line of production: Joe Roff, Stirling Mortlock, Wendell Sailor, Mark Gerrard and of course, the cherry on top of the cake, Tuqiri himself.

All came from a similar physical mould, 6’3-plus in height and tipping the scales at over 100 kilos. And they all came with skills, lots of skills.

That combination of size and skills on the edge gave the Wallaby sides of the time a huge advantage in the multi-phase style of play to which they aspired. It granted an extra strike runner in midfield from the blindside, a big body which could carry a heavy-duty running load from first phase and play close to the ruck in phases.

Back in 2005, the vast majority of Australian first phase, left-to-right attack moves wound up featuring Tuqiri with the ball in his hands.

There was also a more physical cleanout at wide rucks, and more often than not a mismatch in one-on-one situations near the sideline, particularly against the undernourished northern hemisphere wingers of that era.

Size was also a weapon in the kicking game, when it was allied to jumping and receiving skills in the air:

The decline in Australian success at national level coincided with a drought of suitably qualified big athletes out wide, from around 2007 onwards.

The last great Australian big man, Israel Folau left in unsavoury circumstances last year. His outstanding set of athletic attributes masked the size advantage he so often enjoyed against opponents. At 6’5 and 103 kilos, he was a very large man indeed, and the disparity tended to be magnified when he was picked on the wing. From fullback, it was never quite the same.

Other Australian big wingers, like Luke Morahan and Taqele Naiyaravoro, migrated to the UK to further their playing careers. A good young prospect in Jordan Petaia lost his 2020 season to a long-term injury.

Perhaps that is why so much hope is being invested in the development of under 20s star Mark Nawaqanitawase at the Waratahs. If Nawaqanitawase can progress, and Petaia can return to fulfil his own potential, the long ‘big wing’ famine in Australia may finally come to an end. But in order for that to happen, Wallabies supporters will need a lot of convincing that they are getting a complete package, and a player who can handle the basic chores of the game.

They will need hard evidence that the added value of a Folau in the air and on attack will not be undermined by fallibility in the kicking game and positional play. Joe Roff, for example, was an excellent defender with an influential left boot, and he was very rarely caught out of position.

Before the Coronavirus epidemic hit, Mark Nawaqanitawase had been busy setting out his stall, and boldy so, in the early rounds of Super Rugby 2020. He scored two tries on a beggar’s ration of the ball for the Waratahs against the Crusaders in Round 1:

The first try is a superb finish, with Nawaqanitawase having to beat three Crusaders defenders to the corner and maintain body control in the action of touching the ball down in mid-air. It also shows an accurate grasp of the rules, whereby contact with the corner flag is no longer in touch.

The try, scored on the next sequence of play, demonstrated good defensive recognition and the bonuses of a wide man with a big wing-span and soft hands: 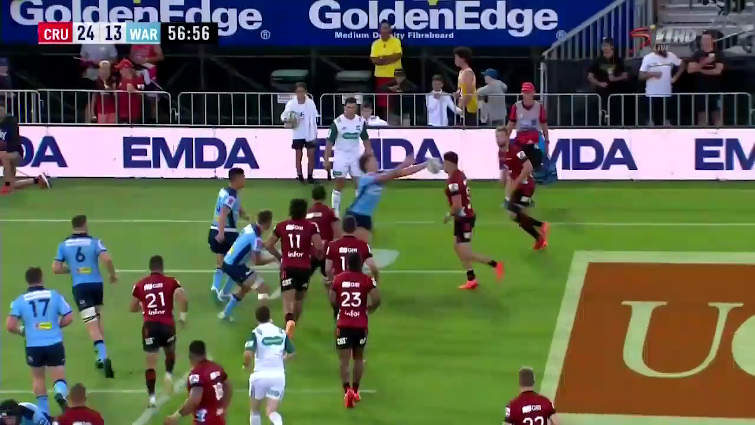 It was not the only time in the game when Nawaqanitawase beat the Crusaders’ fullback David Havili to the ball. He also did it on three consecutive occasions from short kick-offs in the second period, with the Waratahs lagging well behind on the scoreboard:

Repeating the same dose against a side as well-organised as the Crusaders is no mean feat. Nawaqanitawase’s hangtime and his control of the first touch is particularly impressive, and it was a surprise that the Waratahs could not find more use for him in the kick-chase game within their gameplan as a whole.

Import this jumping ability and aerial control to a scenario with Nic White making a box-kick down the left sideline, and you have the basis of a readymade exit strategy for the Wallabies.

In Round 7 versus the Lions, Nawaqanitawase showed his receiving skills are also sitting in the right place for further development:

The first two examples illustrate an essential skill for any kick returner in the modern game – the ability to beat the first chaser and set up a positive situation on the counter. With the Lions shooting a single flyer off the edge, if Nawaqanitawase can beat the first man the Tahs will be in good shape for the exit (in the second instance he won a penalty for the high tackle).

The third example hints at sound kicking technique, even if our man did shank one badly against the Crusaders. The fundamentals of a solid receipt and return game are there, ready to be refined at a higher level of competition.

In an earlier article, I highlighted the Waratahs’ penchant for the offload on attack, and Nawaqanitawase played a key role in the offloading game in their win over the Lions.

He authors two offloads within the same sequence, showcasing a big man’s ability to stand and pass in the tackle, and the height to get the ball over the top of the defender and into the hands of the free man on the right.

Another example later in the first period reinforced the attacking theme that an offload can be as effective as power or a step in beating a defender: 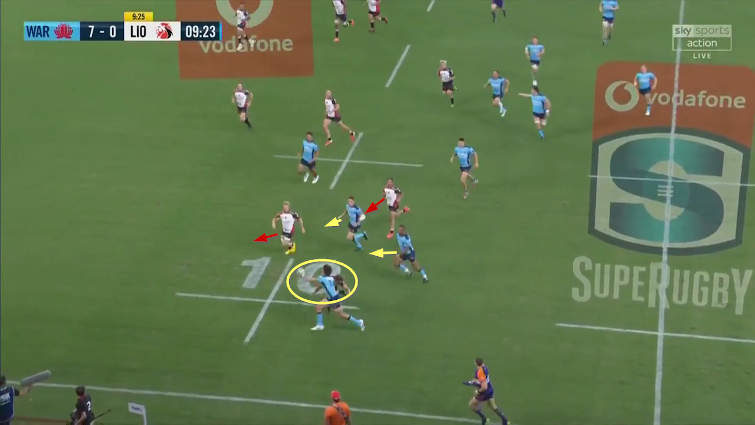 Nawaqanitawase can accept the tackle, knowing that his long levers will enable a full extension of ball towards support:

The Waratahs don’t have an advantage in numbers, the mini-break comes from ‘height and hands’ working together.

Ultimately, Wallabies supporters will need some reassurance that Mark Nawaqanitawase can develop into an all-rounder without obvious holes in his game, the player Israel Folau never quite became. That reassurance begins with defence.

We have already seen Nawaqanitawase’s ability to break in between attackers on the pass against the Crusaders. In the game versus the Lions, he showed excellent positional awareness and timing when backing off in drift, allowing the inside defence to link up with him and shut down the overlap:

In the first instance, he waits until the last possible moment before committing himself to the tackle on the inside man, so that the chance for him to pass the ball has been reduced to a minimum and the opportunity for a turnover at the tackle has been increased to a maximum: 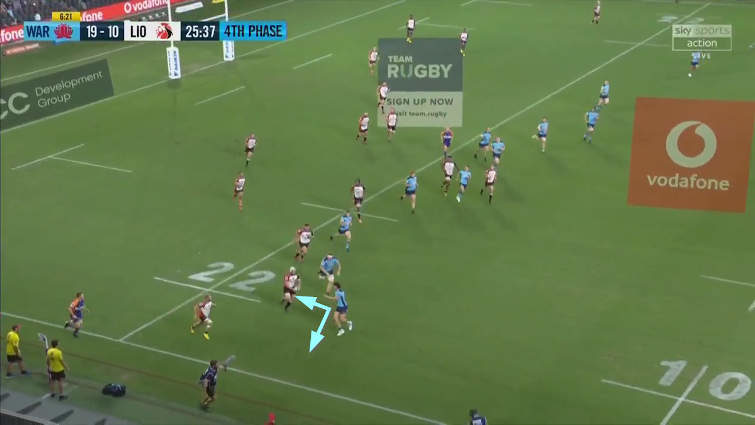 In the second example, the Lions go to the last man in attack, but he has been forced so wide in order to get around Nawaqanitawase that the inside support has overrun the pass and the result is another turnover: 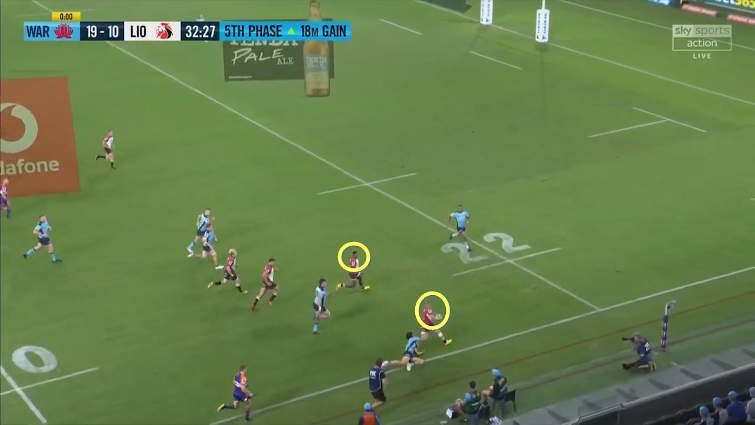 The Waratahs’ big wingman is also unafraid to get his head stuck in over the ball, and that is a turnover bonus too:

Summary
The home for multiskilled big men in the golden era of Australian professional rugby was the back three – think Joe Roff, Stirling Mortlock, Wendell Sailor and Lote Tuqiri, and add in Chris Latham at fullback for good measure. Mortlock and Tuqiri were so big and physical that they could easily handle centre just as well.

Now the situation has taken a turn for the worse. Taqele Naiyaravoro and Luke Morahan have moved their talents abroad to earn a crust of bread, and the most outrageously gifted one of all, Israel Folau, is out of the game entirely.

Australian rugby diehards will be looking for the golden age to return, and the ghosts of the early noughties and late nineties to manifest again on the wing. But they also have a right to expect all-rounders to make it happen – players who can kick and defend as well as they can attack and offload.

New South Wales’ Mark Nawaqanitawase (and the Reds’ injured Jordan Petaia) may be just the men to help bring back the glory days if – and this is a big if – they receive the coaching and logistical support they really need.

Nawaqanitawase can defend, and he can both chase and receive the high kick. He can be a lethal offloader on attack and he has a finisher’s nose. But his potential needs to be recognised and nurtured – the very last thing Australian rugby needs now is another busted flush.