If you watch the All Blacks All or Nothing documentary on Amazon Prime, there are some interesting clues about Ian Foster that might go unnoticed by many given the focus is on the action of the Lions series.

These clues are undoubtedly known to Dave Rennie and it sets up Bledisloe 2 as the real test of his cunning and international credentials – much more so than Bledisloe 1.

In a number of featured exchanges between Steve Hansen and Ian Foster in the series we see that while Hansen is a selection master and risk-taker who was able to identify opposition weaknesses and had the confidence to select even rookies who could exploit them, Foster always took the other, more conservative, side of the argument – often very forcefully.

These changes show that Foster is, at the core, a far more conservative coach than Hansen and won’t make the big calls that made Hansen so successful because they don’t sit naturally with him. In Hansen’s own words, “Foster is the yang to my yin”.

Foster’s role for years has been to curb the wildest Hansen tendencies and that worked to balance things out. But when the yang is in charge, the outcome is likely to be very different. Rennie can exploit this and Bledisloe 2 will be the test of whether he has that cunning.

So how may this play out? Well, we are already seeing some of the game theory in action. Today assistant coach John Plumtree is in the media calling out the Wallabies for late charges on their number 10. He is attempting to bring referee attention to this to extract penalties in Bledisloe 2 – something the All Blacks have done may times in the past.

So if Rennie is truly a cunning coach that knows how Foster works, might he have expected this and have a plan to exploit it? Foster, now that they’ve had time to word the refs up about this, will likely have Richie Mo’unga (or whoever is picked at 10 this week) set up one metre deeper than in Bled 1.

This is all that is needed to suck out the defensive shooter but make it impossible for him to make the tackle before the ball is passed. With the refs wise to the tactic in Bledisloe 1, that’s multiple penalties for the All Blacks.

Having used this tactic so effectively in Bledisloe 1, Rennie would be mad to roll it out unchanged in Bledisloe 2 in the face of this scrutiny and obvious All Blacks response. Instead, it may be likely that Rennie back foots the shooting defender and moves to a whole line rush.

This turns the All Blacks’ trap (deeper set up to draw the penalty) into a reverse ambush. The All Blacks have conceded ground to set up the trap, and the whole line rush can then take that space to hold the All Blacks well behind the advantage line.

If done well, the trap turns against them.

So the first test for Rennie is whether he changes the instructions to the team to avoid the likely penalties and exploits the All Blacks in new ways.

Rennie knows how to play in Wellington with its swirling winds and as Nick Bishop showed so well in his article, used Nic White at 9 masterfully to turn attacking kicks into chaos among the All Blacks back three. Between these two relatively simple tactics of pressure on the playmaker and using the wind to make kick receipt a lottery, the Wallabies disrupted most ball the All Blacks received.

However, as Rennie knows too well, Eden Park is a very different story. Forget the term “hoodoo” which makes it seem somewhat supernatural. The simple fact is that the stadium creates conditions that play into the natural game of the All Blacks perfectly.

They will aim to this time keep the ball in hand and break down the Wallabies through their usual game of ruck pressure, fast recycle and offloads in contact creating line breaks. So what can Rennie engineer here?

This is where, once again, he might rely on his knowledge of Foster and how he will likely respond to Bledisloe 1. It is inevitable that given the influence around the ruck of Nic White in the first game, the All Blacks will defend a bit narrower around the ruck to stop his sniping, pressure his box kick and block the kick chase.

A conservative-minded coach will naturally react to where his team gave up an opportunity. Rennie, therefore, might be wise to play into this early. He tasks White to make a couple early snipes around the ruck that satisfies the All Blacks’ preconceptions.

Then once they’re comfortable defending narrow (and likely got even narrower given its success), the Wallabies introduce their 11 running slightly wider lines off the 9 as the 9 snipes again to fix the attention of the All Black forwards.

Defending a bit narrower around the ruck leaves a larger gap elsewhere. This will either be in the seam between the forward and back defenders or out wide on the edge in a potential overlap. The skill of a great coach will be to empower his 9 and 10 to look for these opportunities and play their 11 or 15 into the narrow seam or cut out wide to get their 13 and 14 into play in a potential two-on-one attacking situation.

The key to the last bit working is, however, exactly how we see the All Blacks play – it needs to reach the wide channels in two or three passes. Last season the Wallabies could not do this.

It always took them four or more passes and the defence had time to soak. Rennie’s Chiefs pioneered this fast switch and used it very successfully. We’ll see if Rennie has been able to correct this deficiency with the Wallabies.

Perhaps the one constant in the Wallabies’ game will be the new defensive ruck pressure we saw last Sunday. While the All Blacks will task their forwards to hit the ruck harder and faster to allow the fast ball, the Wallabies forwards will have to be better again to combat this.

Again, this is where the whole line rush might feature large. If the Wallabies can keep the All Blacks behind the advantage line a reasonable percentage of the time, it’s much harder for the All Blacks to get the fast ball as their forwards have to turn and retire backwards against a Wallaby charge.

The better that rush defences operate, the more forwards the All Blacks have to commit and the more opportunities the Wallabies will have after a turnover. And turnovers are what Rennie wants – that’s why his selection of the back three in Filipo Daugunu, Marika Koroibete and Tom Banks make so much sense given their pure pace. 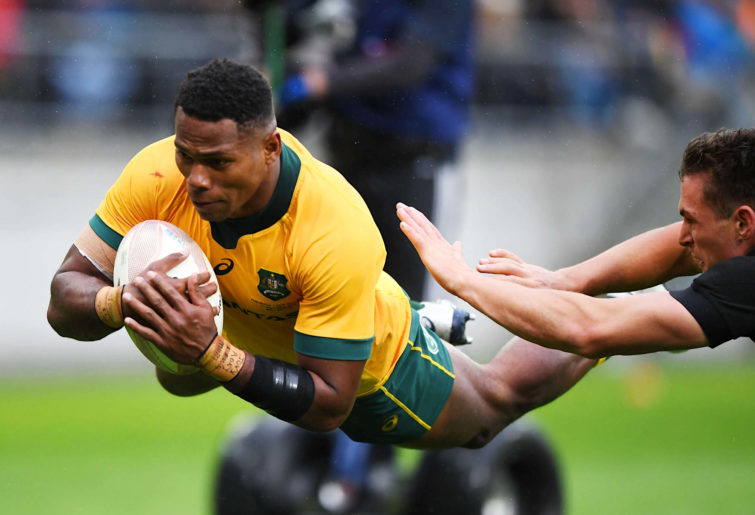 So expect to see a very different game on Sunday. There will be no dominant possession win to the Wallabies this time.

The All Blacks tactics will be to take and maintain possession and starve the Wallabies knowing they have traditionally lost composure in those situations. The All Blacks will be trying to get the visiting side to do what they want – sucker them to play a game plan like the All Blacks themselves, which visiting sides can never do as well given their mistake rate/skill deficiency that then gets punished.

Instead, Rennie will have to mix things up again and be very strategic. My gut feel is that he’s luring Foster where he already knows he will go and has very different tactics ready to exploit them. Watch for them – and whatever the outcome, I guarantee it’s going to be a cracker of a Test and potentially the Test of the series to watch.

And that’s a huge call after the spectacle of Bledisloe 1.