However, for the sake of perspective, how does the loss to Geelong last week compare with some of the finals defeats over the last 50 years?

Before considering this it should be noted that Collingwood’s success rate in grand finals since 1970 has been 18 per cent, and for finals 48 per cent. Compare that with 71 per cent and 62 per cent respectively for the benchmark team of the ages, Hawthorn.

In order from worst to least worst of the Magpies’ finals performances, I suggest the following.

1. 1977 grand final number one versus North Melbourne
Contrary to the popular belief that the 1970 grand final was the worst of all time, I regard this one as the most hideous. Throwing away a 27-point lead at three-quarter time (and having the first shot on goal in the last quarter) is, in crude mathematical terms, even worse than 44 points up at halftime in 1970. This game in 1977 seems to fly under the radar in terms of the pantheon of great losses simply because it led to a draw. It is right up there however because Collingwood had the week off, thrived on the mentorship of a highly successful premiership coach in Tom Hafey during the season, while their older core of players seemed revitalised. North Melbourne had to take the long road to the big one, and were woefully inaccurate on the day.

2. 1970 grand final versus Carlton
Of course, this one has been heavily examined and gone into folklore, with Ron Barassi’s “handball” speech at halftime reaching mythical, messianic proportions.

3. 1973 preliminary final versus Richmond
This game is the heir apparent to the 1970 debacle, with a halftime lead of six goals tossed away in the remaining quarters under the onslaught of Richmond’s robust style of play, an inspired Royce Hart from off the bench, and Kevin Bartlett creating havoc. Sadly, this was the debut game for Rene Kink, who all things considered played well.

4. 1984 preliminary final versus Essendon
In terms of sheer numbers, this one takes the cake. After a reasonably bright start by Collingwood Essendon went on a rampage to the tune of a 133-point winning margin. To say that Collingwood resembled witches hats would indeed be an insult to the latter.

5. 2020 semi-final versus Geelong
The very fresh memories of this debacle has it right up there among the worst. Simply, everything that could go wrong did: a poor start, lack of system, confidence and run, apparent disinterest, game plan that came unstuck if was adhered to at all. But to be fair, the mental and physical aftermath of the previous week’s heroics against the Eagles appeared to play a role.

6. 2003 grand final versus Brisbane
In some quarters, the Magpies were favourites for this game, having disposed of Brisbane in the qualifying final a few weeks earlier. However, the Anthony Rocca-less Pies, missing their vice-captain through suspension, folded under the physical pressure and skill of the Lions. The ungainly attempt by the current North Melbourne coach to evade a tackle, and then managing to slip and stumble in abject fashion, epitomised the day.

7. 2019 preliminary final versus GWS
Everything was set up for a second consecutive grand final appearance. A week off after a convincing win against Geelong a fortnight earlier, home ground advantage, and the significantly depleted GWS outfit should have seen a Magpies victory. However, under sullen skies, Collingwood stumbled badly, with the real question being what could have been? Fifteen minutes of a form revival in the last quarter was almost enough to pinch the game.

8. 1981 grand final versus Carlton
Comfortably among the top teams in the home-and-away season, this performance was reminiscent of so many others. A good lead during the third quarter was tossed away, followed by goal-less last quarter. Yet again in a big game Carlton had Collingwood cornered. Late Carlton goals in the third quarter pegged back a 21-point lead.

9. 1980 grand final versus Richmond
This game ranks not as badly as others. An environmentally-friendly Collingwood team made up of a great number of recycled players from other teams was simply no match against a powerful and physically menacing Richmond team boasting an awesome forward line and stars on all lines.

10. 2018 grand final versus West Coast
This game was a classic lost opportunity. A five-goal early lead (and two-goal lead early in the last quarter) on home turf with massive crowd support was not enough to get Collingwood over the line. The frenetic last quarter in which the ball was mostly in the Eagles’ forward line was like a dripping tap – slowly, slowly Collingwood’s lead ebbed away, culminating in that famous Jeremy McGovern mark, and infamous free kick not paid against Willie Rioli. 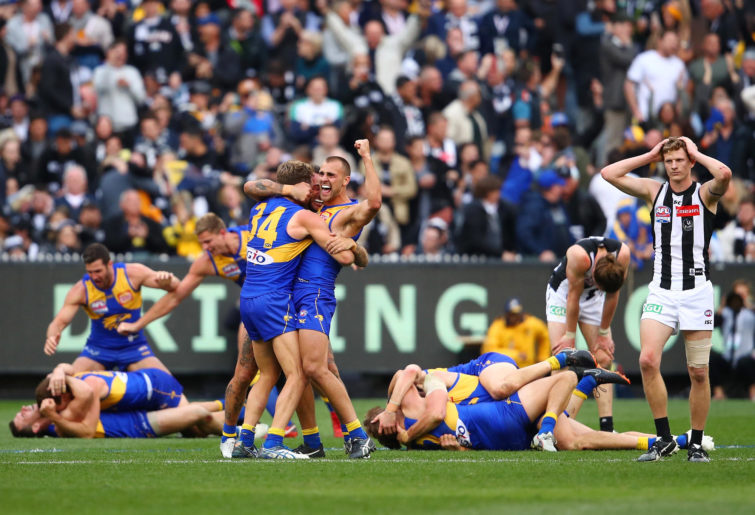 Although these heartbreaking losses span five decades, there have been some common themes.

• SMS: Small-man syndrome. How many times has Collingwood been tormented by smaller forwards in other colours?
• Poor recruitment: No one can suggest that Bernie Quinlan, whom Tom Hafey was keen on, would not have made a difference in the losses in 1979 and 1981. When selective recruitment based on specific needs was employed, hey presto, the 1990 and 2010 flags materialised.
• Player ill discipline: Phil Carman’s suspension in 1977 before the grand final and to a lesser extent Rocca in 2003.
• Game plan at odds with successful teams: For example, Collingwood’s short-passing game style seems less equipped when compared with the long-striding and kicking game of Richmond in the 1970s, while in recent years the game plan has faltered when confronted with finals pressure.

As they say, there is always next year!