Are the All Blacks staring into the abyss?

It all began so promisingly for New Zealand in the post-Steve Hansen era.

After a stuttering start at the Cake Tin, the Bledisloe Cup was retained with two resounding wins in Auckland and Sydney. The cumulative score in those two games against the Wallabies was 70 points to 12, ten tries to two.

It seemed like normal service had resumed. The stats were similar to those of the Michael Cheika epoch, where the All Blacks routinely averaged 35 points and five tries per game against their trans-Tasman rivals.

Over the past two matches, the doubts – and a comet-tail of doubters – have returned with a vengeance. Confronted by two stubborn defensive performances from the Wallabies and Pumas, New Zealand first wavered, then ground to a halt. There was no backlash.

Instead of looking up at a new constellation of stars, the All Blacks are looking down an enormous hole, with few light sources. Before last Saturday, it had been more than nine years since they had lost two games in a row.

“(Argentina) challenged us on our composure again, and that’s probably two weeks in a row when we haven’t handled that as well as we could,” Ian Foster said at the post-match press conference.

“We probably kicked away too much ball when we had the opportunity to put some phases against them.”

He later added, “It has been a busy time, and hence we felt we’ve had to make a number of changes – but there’s no excuses, it’s an All Black jersey and we want to be at our best every time.”

It is not as if the all-conquering sides of the successful 2011 and 2015 World Cups were never under challenge from their opponents. They were there to be knocked off, and there were any number of opponents desperate to do it.

Those All Blacks made it a speciality to win close games, or turn around matches they were in real danger of losing. More importantly, they never lost touch with their processes, or their playing philosophy in order to achieve that aim.

Let’s wind back the clock, all the way to a blustery day in Dublin in November 2013. All week, Ireland had hatched their master plot under Kiwi coach Joe Schmidt, and they caught New Zealand on the hop. At halftime Ireland led by 22 points to seven, a similar margin to the Pumas’ 16-3 lead at Bankwest Stadium on Saturday.

It took the All Blacks until the very last minute of the game to get back on terms, with a famous sequence of attacking play beginning only 20 seconds from the end of normal time:

Starting from a position inside their own 40m line, the Kiwis went through 13 phases of play in the next one minute and 40 seconds, before Ryan Crotty finally touched down for the try at 81:20. On the TV screen, the face of the game clock had turned red for what seemed like an age.

There are some key features of the sequence that are critical. Out of the 13 rucks created, the All Blacks achieved quick deliveries of between one and two seconds on six occasions, even though they only won three collisions. There were no slow rucks of five or more seconds at all.

At the same time, under extreme pressure New Zealand stuck to their policy of playing with width, entering the 15-metre zones on either side of the field on five separate occasions.

In order to stretch a defence, an attacking team has to work hard off the ball to hold their depth, and maintain the width of their positioning – preferably outside the last defender: 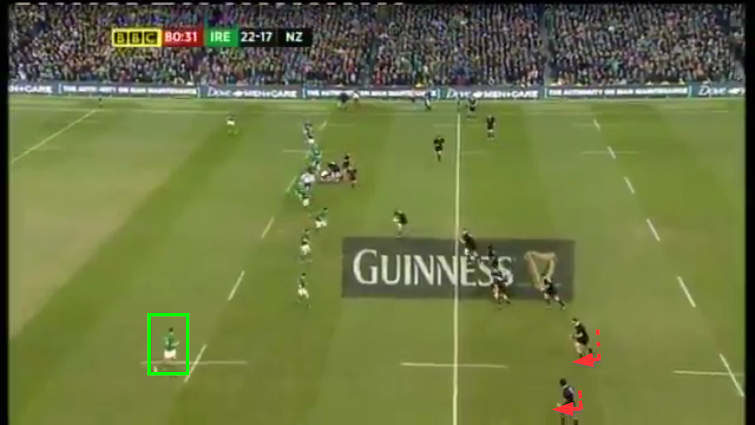 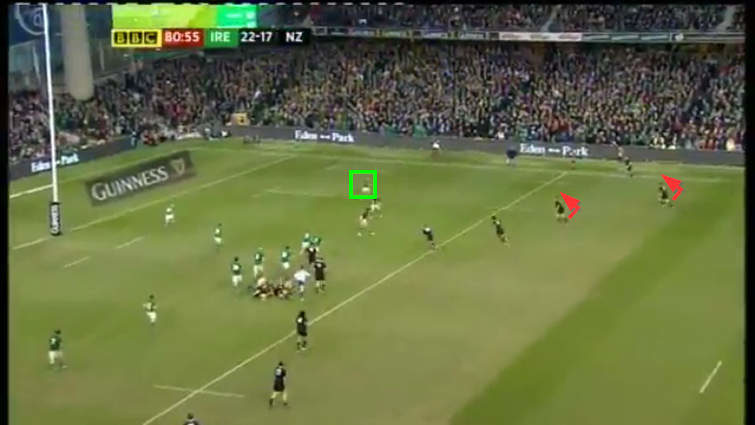 The first example is a snapshot with play going towards the left touchline, the second going right. There is a clear development in attacking width over those 24 seconds – as the Ireland defence is narrowing, the New Zealand attack is widening out. In both cases, the All Blacks are accurate in their alignment, careful to maintain about 15 metres of depth from the head of the previous ruck to the hindmost foot of the next attacking wave.

Wayne Smith has always coached his students to drop a couple of steps, then shuffle out in an “L” shape to achieve that ideal combination of width and depth. This ensures at least one or attackers are beyond the final edge defender, and that the ball has time and space to reach them.

In the first instance, there is time for Aaron Cruden to make the second pass to Ben Smith without placing him under undue pressure, and there is room for the support inside and outside Smith to be included in the play.

In the example going right, the second receiver, Julian Savea, is careful to run straight to fix the defence, and his outside support studiously avoids over-running the pass from him.

The passes are straightforward and simple, it is the effort to align and realign that is the key to success. There are 24 of them made in those torrid 13 phases from Dublin, at an average of almost two passes per phase.

Now let’s compare that with a similar sequence from the final quarter in Sydney against Los Pumas. This attack lasts for 12 phases – one minute and 25 seconds – but ends with a turnover rather than a try. It started promisingly from a lineout:

So far, so good. Anton Lienert-Brown busts the first line of defence on the opening phase, then Sam Cane builds on the momentum with a quick pick and go. In the event, these were the only two positive collisions, and quick one- or two-second ruck deliveries in the entire attack.

There were six negative collisions in the sequence, four instances of slow, five-second-plus ruck ball, and zero – yes, you read it right, zero – entries into the wide 15-metre zones on either side of the field. There were only 11 passes made over the 12 phases, an average of less than one per phase. These All Blacks would be unrecognisable to their predecessors seven years earlier.

The New Zealand attack started to decelerate rapidly after Ardie Savea was repelled on the third phase:

New Zealand ball-carriers began to struggle with high hold-up tackles by the Argentine defence which prevented a quick recycle – first on Joe Moody, then on replacement number eight Hoskins Sotutu:

In the first instance, there are a full six seconds on offer for the defence to regroup; in the second, five.

As a result, it was the New Zealand attack which began to lose the battle of width against the Argentinian defence: 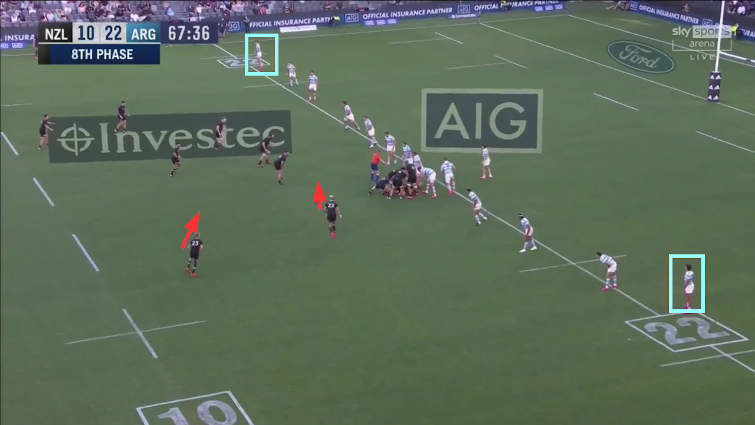 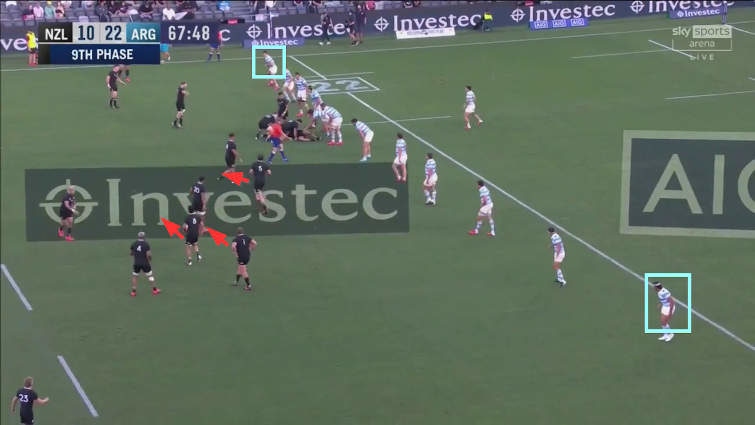 In the first snapshot, the All Blacks can only attack on one side of the field, in the second their forwards are still in the process of regrouping. In both, the widest attacker (Caleb Clarke in the first example, Damian McKenzie in the second) is unconnected to the attacking formation.

When there were backs available, they were far too flat to be able to make a meaningful second pass:

The sequence ended with a real sense of poetic justice. Richie Mo’unga was forced to kick the ball away in order to get it, by hook or by crook, into the right 15-metre channel:

The ball was blocked by the defence, but the war of width had already been lost before Mo’unga ever received the ball, with the New Zealand attack shallow and condensed in the middle of the field: 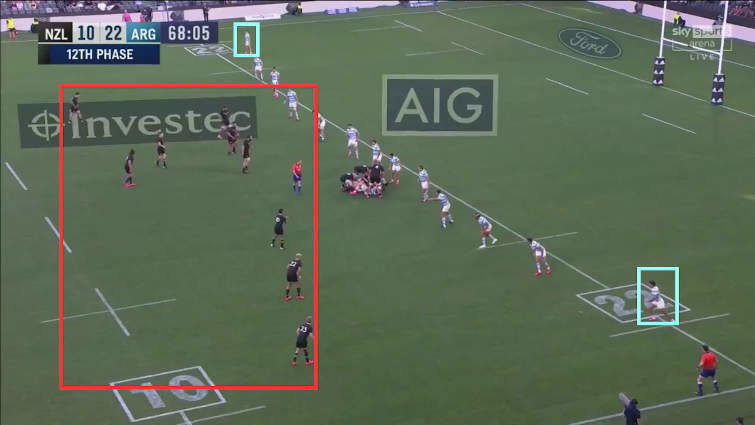 The absence of the most fundamental values of accurate alignment was a recurring theme:

Sotutu makes a long and penetrative break from the base of the scrum and there is quick ball from the ruck at the end of his run, but it is perhaps best to draw a polite veil over the backline alignment when the ball goes out to the left. Rieko Ioane had already overrun the pass and there was no chance of the ball ever reaching Caleb Clarke in space.

Summary
The forebears of this current iteration of the All Blacks will probably be looking away from some of the basic failures of those who wore the famous jersey over the weekend. To watch would be too much to bear.

New Zealand’s ability to come back and win close matches during their golden period over the last decade was built not just upon composure and a reliable headspace, but on accurate, repeatable techniques and a faithfulness to their playing philosophy, whatever the pressure.

Those All Blacks knew how to create width with their ball movement, preserve it with their alignment, and exploit it with their offloading and finishing. The current side is not in the same class, and it is hard indeed to think of one player from the past two weekends who would crack that Dublin 2013 team. 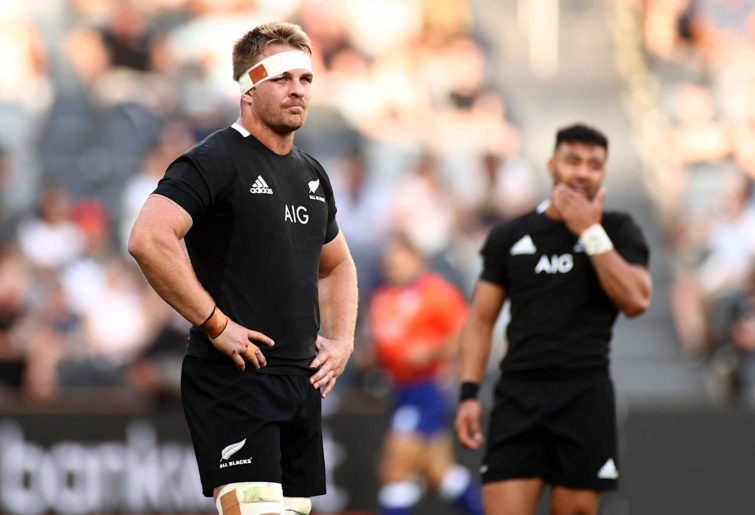 The new coaching group will have to shoulder their fair share of responsibility in the process. Ian Foster commented that the All Blacks never had the opportunity to build phases on attack against Argentina, but it was probably more fortunate that we did not get to see them try.

New Zealand have shown some good ideas in early phases, but when phase-play goes deeper, those ideas and the disciplines upon which they have to be based tend to disappear.

The All Blacks have not tumbled into an abyss just yet, but there is definitely a large and threatening bear-trap opening up beneath them. Maybe it is just as well South Africa chose not to take part in the Rugby Championship after all.