'I wouldn't entertain that': Ross Lyon reveals all on Carlton, Collingwood links

Ross Lyon says he’d ‘take the call’ if Carlton hit him up to take over as head coach, while confirming he rejected an approach from Collingwood.

In a revealing interview on Footy Classified, the former Fremantle coach spoke openly about speculation linking him to both jobs for the first time.

Lyon made it clear that he expected Alastair Clarkson to take over from David Teague at Carlton next season, and Lyon was previously reticent to return to coaching after a disappointing end to his time at the Dockers.

But he said a discussion with Leigh Matthew had helped him come around to the idea of coaching again sooner than he expected.

“Carlton have been strong with Mark LoGiudice, they’re going through the process and they’ll review and then make a decision, I believe that’s the way they’re going,” Lyon said.

“Me personally, I have shifted a little bit, that did happen with Leigh, it had me thinking.

“It didn’t end super well at Fremantle although I felt I coached really well in the last year, we were fifth or sixth on the ladder with seven wins and five losses and then we fell away.

“I look at some of that vision and I looked about 800 so why would you go back into it, but it did stimulate my thinking.

“If an opportunity arose, and I say that with the greatest respect to Carlton, and they rang me, I would entertain it, but I also understand that I haven’t got tickets on myself, it’s a red-hot field, Alastair Clarkson is available.

“With all the intelligence that I have within the marketplace, I think that they’ll speak to Alastair at the right time, which is next week.

“If I was the Carlton board and I could get Alastair Clarkson I don’t think you could go past that.” 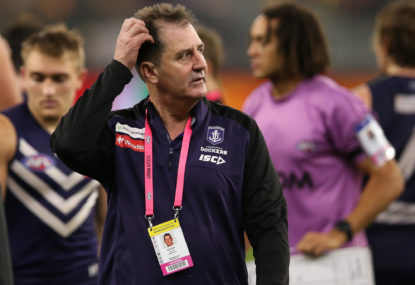 Clarkson is the strong favourite to take over but has hinted he might take a year off to freshen up after leaving Hawthorn.

If the job is available Lyon said he would “certainly take the call and consider it.

“I am aware, there’s enough Carlton people, famous Carlton people, premiership players, coaches, ex-champions that are advocating because they’ve worked with me or know me personally and understand their club and there’s those sort of connections, so I do know that’s occurring as well.

“It makes you feel good – to be honest if Leigh Matthews says you should coach again and then you read his article, there’s no one else in the AFL that’s coached two different clubs and taken them to grand finals, you can’t fluke that so we all do need some affirmation and it probably just lit the fuse a little bit.

Lyon was also asked if Collingwood had spoken to him.

“I don’t think Graham Wright would mind, he reached out to a friend to get my number and I was aware and just said respectfully I wouldn’t entertain that for a variety of reasons,” said Lyon.

“If you get a headhunter ring you and you go and meet them and you go for the job, if you haven’t got that chemistry, that happens pretty quick, well it doesn’t happen or it shouldn’t happen.”

He was asked if his decision to ignore the Magpies was because of unrest at the club.

“I think it‘s instability,” said Lyon. “I think Nathan’s a bit unlucky. I don’t know Nathan, Nathan’s not a friend, but just from the outside … I think if you see misalignment it’s a red flag.”