BRETT GEEVES: 'The day I truly believed Justin Langer was going to kill me'

If you’ve been around Australian cricket, domestic or international, in the last 30 years and you haven’t had words with Justin Langer, or weren’t there when Justin Langer did his rage thing, then, well, you missed a thing of beauty. His rage is special.

I’ve seen it. Received it. Enjoyed it. I am fortunate to have experienced the game as a competitor to one of Australian cricket’s absolute greats. And while the below is all about gamesmanship and banter from a different era, there was a time when I truly believed JL was going to kill me.

Tasmania played WA at Devonport (Northern Tasmania – 2004) on an oval with a concrete bike track around it, the strongest northerly you’ve ever experienced (direct from Bass Strait), a wicket that had been cordoned off as a goat pen for the previous week’s bikes and spikes carnival and a changeroom/grandstand facility that had seen less upgrade than the constitution of Australia.

Both teams agreed that the place was a tip and that playing there was an almighty struggle. But before the game had even started, and the wicket had proven itself to be a mess of droppings and rolled in carrot sticks, JL was exploding to anyone who would listen about all of the above, plus the size of the sightscreens, the shape of the sandwiches and the lack of new releases to hire from the East Devonport video store.

So, when I cleaned him up with possibly the greatest delivery of my life – no shit, this thing swung a metre in the last metre it travelled – and we all gave him a raging send off, what I didn’t know at the time was that we’d planted a rage seed that would later blossom into something beautiful. 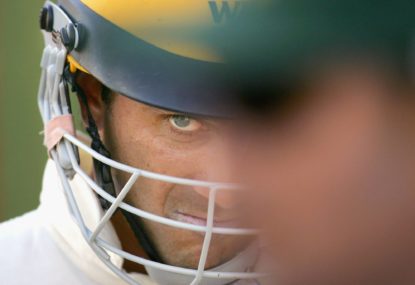 The next time I see JL is 2006, and it is his return game after being hit hard in the head by Makhaya Ntini in the third Test of the 2006 South Africa tour.

JL is returning, and we are flat because outside of the one freak ball I delivered on the Devonport goat track, the Tassies’ level of success against Langer was equal to that of the NSW government in containing the Delta variant. He was rampant. And dominant. And, um, we were grateful for only 188 in a day.

We bat first, Tim Paine scores 200, we declare at 500+ and it’s JL time. Of course, we try and bump JL thinking he’ll be a little hesitant on the short ball.

(Narrator – JL was not hesitant on the short ball)

And before we know it, he is on heaps, again, and is starting to really feel himself.

I’m into my third spell, going at five an over, and I deliver the first ball of a new over to Marcus North, it’s a dot, so I turn around and walk back to the top of mark.

On the way back, I get that awkward feeling that someone is watching me. You know the one. I turn around and JL is staring at me. I bowl another three balls, all dots, and he has not taken his eyes off me. I swear, if this was a nightclub, we would have been pashing.

After the fifth dot, I walked back past him with a finger up my nose. He looked angry. As the sixth ball was another dot; I turned around from my follow through with an additional finger up my beak and collected my hat from the ump.

This made Justin angry. He said: “You are a savage and a bogan and have no respect for the game” or something like it.

I laughed, as this was kind of true, and replied “are you still fuming about me being too quick for you in Devonport a few years ago”?

“I don’t remember stuff like that” responded Justin, hastily.

Just as he completed his flustered rebuttal, former Tasmania, Hurricanes and Scorchers opening bat Travis Birt ran past and said, “that’s because you’ve been hit in the head too many times”.

You think JL was angry when Bangladesh got some screen time on the Cricket Australia website!!??

He stopped the game and requested that the umpire do something about this level of disrespect. The umpire, who I am convinced was giggling, did nothing.

(Narrator – JL was not hesitant on the short ball or impacted by any level of verbal from the plebs.)

That game ended up a thriller with WA requiring 401 off about 80 overs. And at 5-346, and Luke Ronchi going bananas, we were very lucky to win the game. In fact, from memory, a Michael Divenuto direct hit from long-on in the last over won us that match. SCENES.

We partied, hard, and one day later fronted up for the Ford Ranger 50-over game.

We bat first, make 264, and then it’s JL time. Well, so we thought. Instead of Langer, we get Scottie Meuleman and Luke Ronchi. The only time I’d seen Ben Hilfenhaus happier was after I finished reading him his first Clifford the Big Red Dog series.

Mueleman out early, Marsh to the crease.

Marsh out first ball, North to the crease.

Ronchi out, Voges to the crease.

North out, Langer to the crease. At six.

My first ball to JL rises sharply off a length and hits him under the arm pit. I’m happy with myself – “You were later on that than you were to the crease, the games almost over, where have you been you weak %$^&&?”.

The response wasn’t what I was expecting: “I’ll kill you, call me weak, I’ll take you out the back of the changerooms and I’ll beat the shit out of you.”

But that wasn’t the end of it, he was following me as I walked to top of my mark. I felt that had I turned around to face him, he would have hacked me to death with his Kookaburra Sword.

I’ve not seen that level of anger/rage on the cricket field and I’m convinced he meant every word of it.

His eyes were seriously spinning. This wasn’t the pash me stare I was getting in the four-dayer. In that moment, he was angrier at me than he’s ever been at Usman Khawaja.

It was only during the post-match that I found out that JL could hurt me, and most others, really badly through his dedication as a black belt in Zen Do Kai. And given my fighting pedigree – thumb wrestling champion of Claremont High School Badminton Team 1994 – I’m thrilled that it was only the next three balls he hit really hard – 6,4,4 – and not my wobbly belly.

As for Justin Langer, the coach, yeah, he’s angry. But he’s always been angry. And if you aren’t aligned with him on work ethic, passion for Australian Cricket and love of John Williamson and Steve Waugh, then that is a YOU problem.

I’m not part of the pile on, I loved playing against JL and look back on stories like this with a great sense of joy. Whatever CA do about his coaching tenure has to be team-performance based.

It can’t be because he is angry, they already knew this. We all did.