The bad news is that AFL House have decided we needed a weekend off between the train wreck Preliminary Finals, and the drive-you-mad-cliché-titled-Big-Dance.

The problem with a week off is that we now have a large media focus on the woeful performances of Geelong and Port Adelaide, list analysis of the teams who failed, an abundance of trade rumours to discuss, and not enough focus on the two best performed teams of the season.

As we wait for the teams to unleash Carnage on the field at the Grand Final, we thought we’d have a little fun taking inspiration from the upcoming action blockbuster movie Venom: Let There Be Carnage releasing in cinemas from November 25.

Because when I think back to the first Venom movie, there sure was a lot of tackling, stabbing, shape-shifting and death… with zero free kicks awarded for the high tackles that saw heads being bitten clean off or even infringements for swearing and abuse.

If we had to choose someone to umpire this on-screen clash, you know who comes to mind?

“CARNAGE, CARNAGE, NO, YOU initiated that contact by placing your mouth and 40000 teeth around the head of VENOM, he did not shrug or duck, he teleported. Don’t look at me like that and do not speak to me like that again – you are off your line VENOM, play on!!”

For those who don’t know the movie, or the characters, here is a brief intro:

Venom is a black alien symbiote from outer space, which needs a living body as a host to survive. He stands at 274.32cm tall – or 9 feet in the old speak – and weighs 180kgs (these are my guesses). He has big shoulders, is very, very, very strong with menacing eyes and a long tongue. As a kid, he would have really benefited from his parents investing in his smile via an orthodontist, because his squillion sharp teeth cover the bulk of his face, and you feel this will be used against him when auditioning for roles next to Jennifer Aniston in romantic comedies. 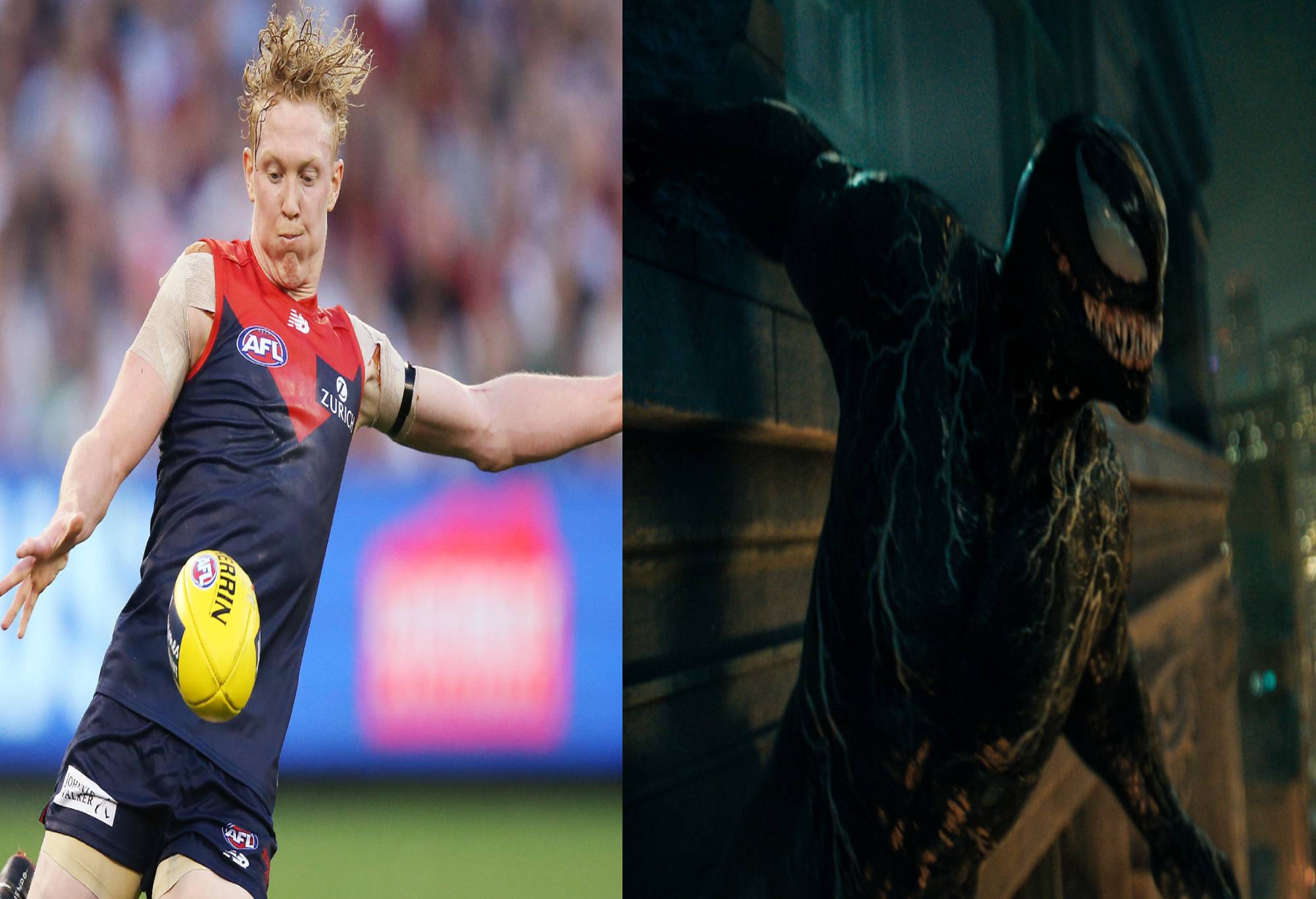 CARNAGE is, to put it simply, a more dangerous version of Venom, with similar strength, agility, and speed abilities. He can use his tendrils as deadly weapons and shoot them as projectiles. Handily for his reigns of terror, he also has a strong healing factor. He is meaner, more cunning, and willing to fight a dirtier style to ensure victory.

His player comparison is one of the hardest footballers to ever play the game, Robert DiPierdomenico. 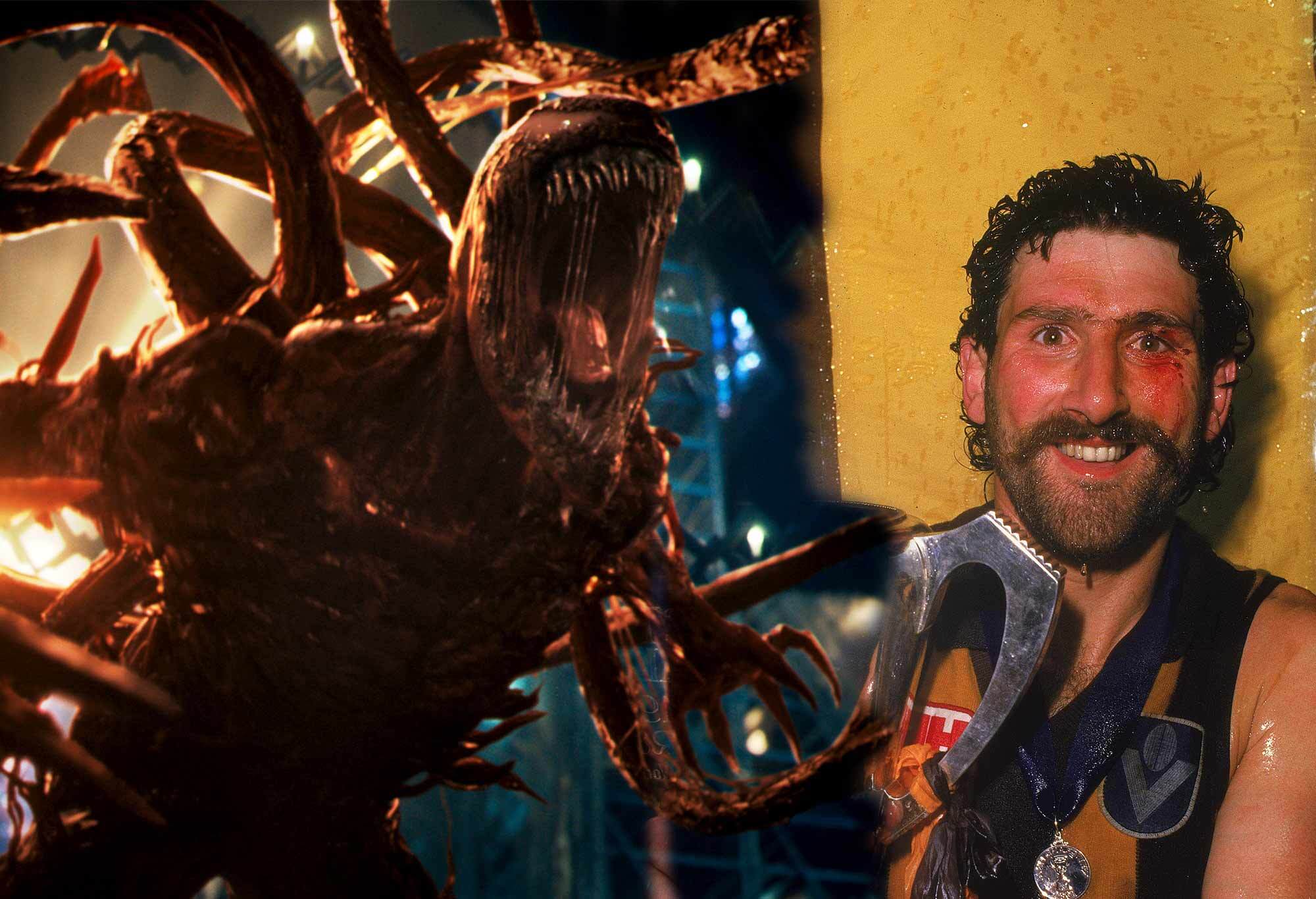 Of course, the modern-day footballer is more aligned to Clayton Oliver and VENOM than they are the old school mentality of CARNAGE, Dipper and the 20th century gang who were willing to cross the line into assault to give their team the best chance at victory.

As we look ahead to the AFL GF, the strength and depth of both teams is scarily even.
Bontempelli – who might be the best pure footballer we’ve ever seen – Macrae, Treloar, Smith, Liberatore, Naughton and Dale/Daniel are equals to Petracca, Oliver, Viney, Brayshaw, May, Lever and Salem/Langdon.

Max Gawn single-handedly has the Melbourne Demons as outright favourites to triumph over the Western Bulldogs heading into the September 25th season decider. But it’s the connection of ‘symbiotes’ Clayton Oliver and Christian Petracca to their ‘host’ Gawn that will be the deciding factor.

Think about how VENOM was able to outduel Riot in the original movie. He could never do it alone – symbiote vs symbiote – through sheer physicality, shape-shifting tricks, or smarts. It was his connection with Eddie Brock, and their team-work/bond, that allowed both VENOM and Eddie to overcome the ego, arrogance and psychotic killer instincts of the villain symbiote and his host.

Offensively, the clearance work of this trio saw them exiting through the front door of stoppages, which, as we know, provides a direct line to the leading forwards, one on ones and bulk goals.
It is how 125 to 42 happens. And to solidify the point, it’s how 163 to 44 happens across the last five quarters the two teams had played against each other.

Defensively, this same trio, with the assistance of a third host connected symbiote, Jack Viney, drove the Cats out the backdoor when they did get their hands on the contested ball. The only avenue this provided Geelong offensively was wide to the wings or backwards. This allowed Melbourne time to structure up defensively, pressure for turn overs and deny Geelong access to any form of execution of their possession style of play.

The Cats have recruited a large number of players over the last period, but never a decent ruck, forcing them into a Rhys Stanley/Esava Ratugolea combination to take on the power of Gawn.

The Dogs? They’ll have Tim English; who is more like Winnie the Pooh when compared to the impactful capabilities of Gawn, who is coming off the back of one of the most dominant individual games of football ever played.

Scarily for Dogs fans is that they’ll rely on Stef Martin to keep Gawn honest. You’d have to think English plays a big role forward to try and stretch the lack of ruckman-type-height in the two Melbourne defensive pillars, Lever and May. Lever and May want to control the air, and English deep would be the best chance of negating that tactic by, at the very least, bringing the ball to ground for Cody Weightman and Laitham Vandermeer to engage their low to the ground forward craft.

After one game in 16 weeks, by the time the final rolls around, the Dogs cannot have faith that Martin will be able to negate Gawn’s freak aerobic tank and ground coverage, dominance in the air, tap/clearance dominance, and overall supply to his midfield symbiote.

Maybe the biggest impact Stef could have on this match-up is to go full 1989 with a Yates on Brereton-inspired play at the opening bounce. It’s old school, it’s what Carnage would do, and it might just be the only way.

On the flip side, it’s hard to go past Marcus Bontempelli as the player required to create chaos should the Bulldogs stand a chance of beating Gawn and Melbourne.

Bontempelli is a flawless generational talent.

There is not one facet of the game he does not have total control of and it’s scary to think where he ends up as a player once his career reaches its final chapter. At age 25, his book isn’t even half-way written, and with 160 games in the bank, he is a four-time All-Australian, voted Captain of The Year and League MVP this year by his playing peers at the AFL Players Association and already has a premiership medallion in his pool room.

Bontempelli is in the Leigh Mathews mould.

He will collect 30+ possessions covering the ground like a rover, his tackles stick and his biggest impact on winning football games almost always come on the scoreboard. He’ll need 25+ possessions and three goals for the Bulldogs to crack the defensive code of the Demons.

The Dogs have the symbiotes, they’ve even got the number one symbiote and may run deeper through the midfield, but they’ve no host, and therefore the Dees and superhost Max Gawn will win the 2021 AFL Premiership, with Gawn to win the Norm Smith medal.

Venom: Let There Be Carnage
Tom Hardy returns to the big screen as the lethal protector Venom, one of MARVEL’s greatest and most complex characters. Directed by Andy Serkis, the film also stars Michelle Williams, Naomie Harris and Woody Harrelson, in the role of the villain Cletus Kasady/Carnage.

Venom: Let There Be Carnage is releasing exclusively in cinemas from November 25 and thanks to Sony Pictures Releasing, you can win tickets to catch it on the big screen by clicking here.