Thanks to all who contributed a question at call-out time.

The Wallabies front row was penalised in the early scrums. Did the ref get it right, or were SA pulling some sneaky moves?
– JC

Could you try and explain the scrums again this week? I was a bit befuddled by a lot of the decisions. There were times when I thought the Wallabies had the ascendancy only for a penalty to be blown the other way. Other times, I thought we were certainly going to concede one and it was blown in our favour. Overall, however, I was left underwhelmed by the mighty Bok scrum.
– Oblonsky’s Other Pun

Agreed. I don’t understand how a team can be penalised for collapsing etc before the ball is even put in.
– Numpty

Although English official Luke Pearce gave a very positive account of himself overall, the refereeing interpretations at the scrum remained as mysterious as ever.

The first three scrums on the Springbok feed all ended up on the deck, with young Angus Bell copping the blame at the first of them.

At six feet and four and a and half inches tall, Bell is about two inches taller than his opponent, the redoubtable Frans Malherbe, and the longer levers create the visual impression of a ‘hinge’ by a taller man. A reset at the first set-piece of the game, at least until the true picture of ‘dominance’ became much clearer, was in order.

The mystery deepened halfway into the first period.

There is no significant forward movement on either side, and as soon as Malherbe feels some pressure underneath his right shoulder, he drops the scrum to the floor. In this case Luke Pearce waved play on as the ball was ready to be played.

Angus Bell conceded his second penalty of the game just after half time.

Again, Malherbe does little more than extend his upper body and fall flat on his face, but he has done enough to force the ‘hinge’ shape in his opposite number that triggers a decision by the referee.

When the scrum stayed at a more comfortable height, Bell looked to be in control, and Australia won slick ball from their own first two feeds. With Malherbe reluctant to drop the scrum close to his own goal-line at the end of the first period, the young Australian loosehead went to work. 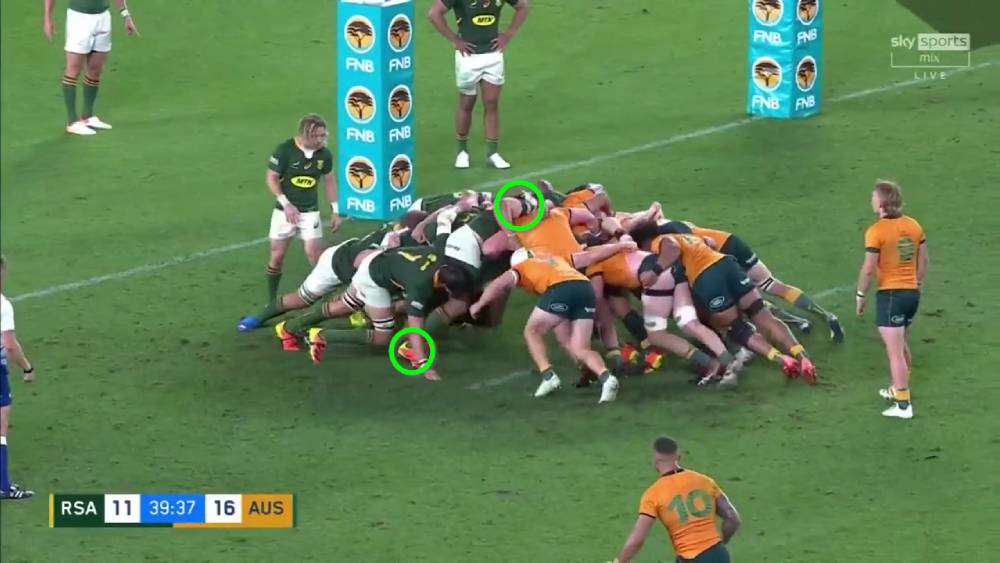 This is a real picture of dominance for the loosehead prop. Frans Malherbe’s right foot has left the ground and his right shoulder is at the apex of the set-piece.

The Wallabies squeezed an even bigger advantage out of the battle between Taniela Tupou and ‘Ox’ Nche off the bench. With eight forwards on each side, Tupou discovered that Nche could not defend a shift of weight towards the middle of the set-piece. 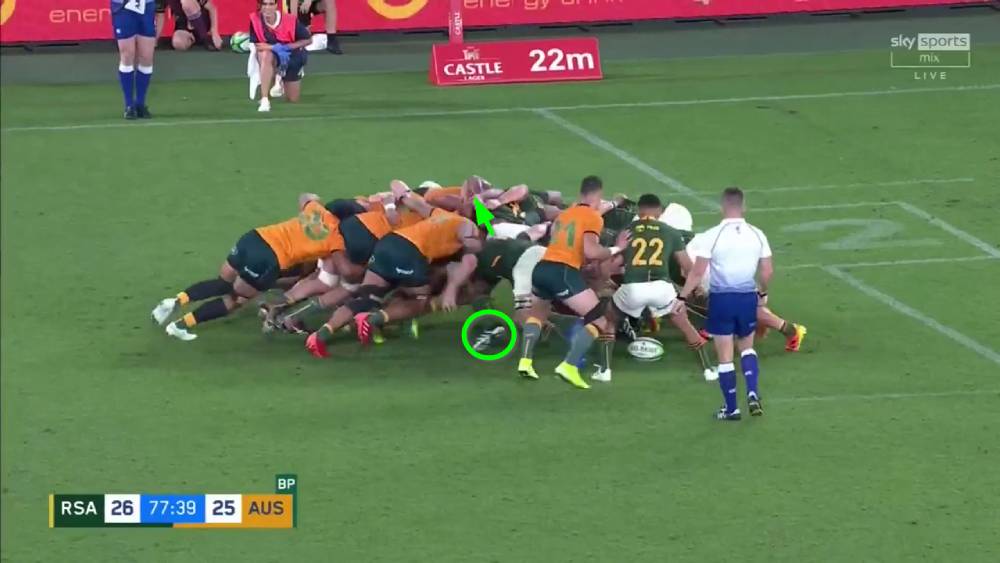 This was one scrum before the decisive event, right on the hooter. Nche’s left foot has left the ground and his upper body is angled towards the far side-line. The impression was replicated one short minute later.

Interestingly, Luke Pearce did not award a penalty for any aspect of the South Africa scrum disintegration, but only for the Nic White strip at the tackle afterwards. Fortunately for the Wallabies, it did not matter.

What to do with JOC? Will he just become a super-sub, or given his rugby nous would he better be utilised at 13 as a running 2nd distributor or 15 where he can interject himself as a playmaker?
-Cookie.

Does anybody think Quade is now an automatic choice to start at 10? I’m a fan but I am aware that he’s 34 and will be knocked around a lot as he takes the ball to the line and will be asked to do a lot more tackling by smarter game plans than the one from the Boks on Sunday. I also hope Rennie doesn’t just give up on Lolesio. There will be opportunities to play JOC but he’s been injured for months. Let him come off the bench at 10/12 depending on the game situation.
-Ozinsa

Having both JOC and QC compete at 10 is healthy and given their age, injuries are unfortunately going to be more common than not. Also having them both play 10 (one on bench) will keep them fresh, hungry and offer Noah more mentorship for when he eventually gets the required skills/experience to run the ship.
– Chester B

QC should be an automatic starting 10 until he actually gets a niggle or Noah performs better off the bench. JoC should be on the bench next Game 1MO. So, my question is who should he replace on the bench – Petaia or Hodge?
– PeterK

One ‘amigo’ has just had his Peter Pan-like rejuvenation against South Africa, now it is the turn of another (James O’Connor) to make a comeback from injury.

But if Quade sticks at number 10 for the remainder of the Rugby Championship, as now seems likely, where can Dave Rennie fit in the talents of O’Connor, who was so central to his plans last season?

I doubt he will move him into the back three. fullback or wing may well have been his best position in his younger days, but Rennie will now want him in and around the ball, to make best use of his leadership and communication skills.

That means jersey number 13 could be the answer. It would be harsh on Len Ikitau, who enjoyed his best outing so far in the green and gold against South Africa in Townsville, but Samu Kerevi and O’Connor played together throughout the 2019 World Cup group stages in the centres.

Defensively O’Connor is well-versed in the duties at outside centre from his time with Sale in the UK, which means Samu can remain at 12. On attack, JOC can link directly with the outside backs, which is so often his function at the Reds in any case.

O’Connor and Kerevi enjoyed a good understanding together at the World Cup.

Imagine Quade making the final cross-kick instead of Bernard Foley, and you have the perfect balance of functions!

If James O’Connor comes back on the bench, either Reece Hodge or Jordan Petaia could move into the starting fullback role, with the other riding the pine alongside O’Connor.

What are the Wallabies getting wrong with their backfield kicking/kick receipts and exits in general? Is this a personnel issue, and if so, who could/should come in? Or is it a tactical issue that they could tweak? The Wallabies turned over a lot of ball on or near halfway, particularly in the 2nd half.
– Numpty

Stop the infatuation with box kicking from our 22! Get set, and once the ball is ready at the back, pass quickly to option kickers. Cooper, Banks etc…
– Hoy
What I seem to have noticed is that because the defence can rush so fast now, if the 10/12/15 isn’t perfectly positioned, and unless the pass from the 9 is perfect, then that split second it takes to get set can mean they are under so much pressure from the defence that the kick is often rubbish.
– Oblonsky’s Other Pun
I’m keen to know whether we are capable of being a top 3 side with McDermott starting, if he does not improve his kicking.
-Oblonsky’s Other Pun
Tate was pretty poor. Say what you like about a minor injury, but for me White replaced him on the back of Tate’s performance.
– Bobby

I remain convinced their respective skill sets are way better suited for opposite roles – White starting and McDermott finishing.
– Ozinsa

I have no doubt that Tate McDermott’s recent performances ta number 9 have left him well in credit with the Wallaby coaching panel, but the kicking game still lags behind the rest of his play, and this makes the box-kick exit a much less attractive option with Tate starting than it is with Nic White in ‘the box seat’!

There are a number of different aspects that influence the effectiveness of contestable kicks. South Africa reclaimed all of their first three high kicks, while Australia lost all five of theirs. Aggression on chase was a big factor.

It’s a decent effort by McDermott in the first instance, but Andrew Kellaway stops short to make the safe tackle, whereas Sbu Nkosi charges straight through the aerial space and knocks over Tom Banks in the process.

It is really a foul because Nkosi has no chance of catching the ball himself, but South Africa pick up the shrapnel and play moves on. The Springboks are prepared to play much closer to the edge in order to win the ball back.

In the English Premiership, referees tend to require number 9’s to play the ball far more quickly once it reaches the base, and on occasion the faster cadence seemed to hurry Tate before he was ready to kick.

There were also problems associated with the set-up phases before the exit was ever made.

You don’t really want McDermott having to make a longer pass off his left hand so close to the goal-line! In the second half, Lachie Swinton also lost control of the ball twice on easy, ‘surrender-tackle’ type phases in preparation for the box exit.

What are the best solutions? Especially in matches of the strategic variety which the Wallabies will encounter against both the Springboks, and on the end-of-year tour in Europe, it makes sense to start Nic White for accuracy on the box kick.

The ball lands in the danger zone where the chase can attack the receiver and generate a turnover.

The other major option is to make far more use of Len Ikitau’s left boot kicking towards the left side-line. This is a tactic which Wales (with Jonathan Davies) and Ireland (with Rob Kearney) have used successfully for many years. Ikitau’s left boot is possibly longer and more accurate than both,

A big thank-you once more, to all who made a genuine contribution at call-out time!