The featherweight title fight, which headlined UFC 266, lived up to its top billing with the judges scoring Volkanovski a unanimous victor 49-46, 50-45 and 50-44.

It was his 20th consecutive win, including 10 straight in the UFC.

After two fairly even opening rounds it peaked in the third when Volkanovski miraculously managed to escape a full guillotine and then a triangle choke by Ortega, who is a jiu jitsu black belt.

Volkanovski was taken down for another guillotine attempt in the fourth round, but survived once again.

The 32-year-old from Wollongong then turned the submissions into a dominant performance, with Ortega showing his courage to go the distance in the five-round war of attrition.

With a cut eye and bloodied face from Volkanovski’s ground and pound, Ortega was checked by the fight doctor at the end of the third but allowed to continue.

With the fight rescheduled from March after the Australian contracted COVID-19, Volkanovski didn’t appear to tire and continued to move forward on the American throughout. 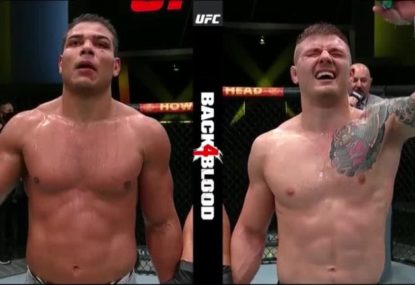