Thank you to all who contributed, or helped develop a question at the call-out stage.

It seems a pressing issue is refereeing “standards”. Rennie, normally very conservative, blasted out. What do you believe World Rugby can do to address this simmering issue of Ref and TMO standards?
– Bobby

When Big Brother is death-riding every refereeing moment it inevitably has an effect.
-Red Rob

Nick, a “rule” question in respect of the Welsh knock down. Is the offence committed simply at the point of contact (with the ball hitting the ground) by the defensive player… whether it goes forwards or backwards is irrelevant?
– Bobby

The knock on or back is totally irrelevant. If the player deliberately slaps at the ball and doesn’t regather it before it hits the ground it is cynical play and penalty or yellow card.
– Former Fan

The Tompkins try was not so clear but I think it probably was a fair try. The only thing that needs to be decided is if it was a knock on or not. If the ball was knocked on then it should have been a penalty to Australia. I’m not sure of the laws about whether it should have been a yellow card or not. Does the opposing team need to be in a try-scoring situation for it to be a yellow?
– Larry Longprong.

Am I alone in thinking a red card for head clash is ridiculous when a swinging arm only got a yellow? I understand it all, the rules, the mitigation etc… I just find it ridiculous. I just can’t see how punishing completely accidental contact like that helps any aspect of the game
– Hoy

The discussion about refereeing standards has hardly abated since the controversies arising from the Scotland game, some of which Dave Rennie has stated were the topic of an apology from World Rugby. They were alive and well again after Mike Adamson’s performance in the Wales game.

Rather than just rehashing what has gone before in other articles this week, I’ll try to add a fresh perspective. In all refereeing controversies, there are typically three aspects to consider: [1] the letter of the law, [2] the protocols within the laws established by the referee’s performance panel, and [3] the wider needs of Rugby as a professional spectacle. All of these have to be satisfied in order to realize any consistency in the officiating of the game.

Let’s look at three of the major incidents from the game in Cardiff from those vantage-points. There is little doubt that the referee had no option but send Rob Valetini off for good in the clash of heads with Wales second row Adam Beard. Ten years ago, it would have been ruled a ‘rugby accident’ and ignored completely, but times have changed and so has the view of high challenges.

Now, there is far greater sensitivity to the long-term danger of concussions and head traumas, so [2] and [3] are in the ascendant: 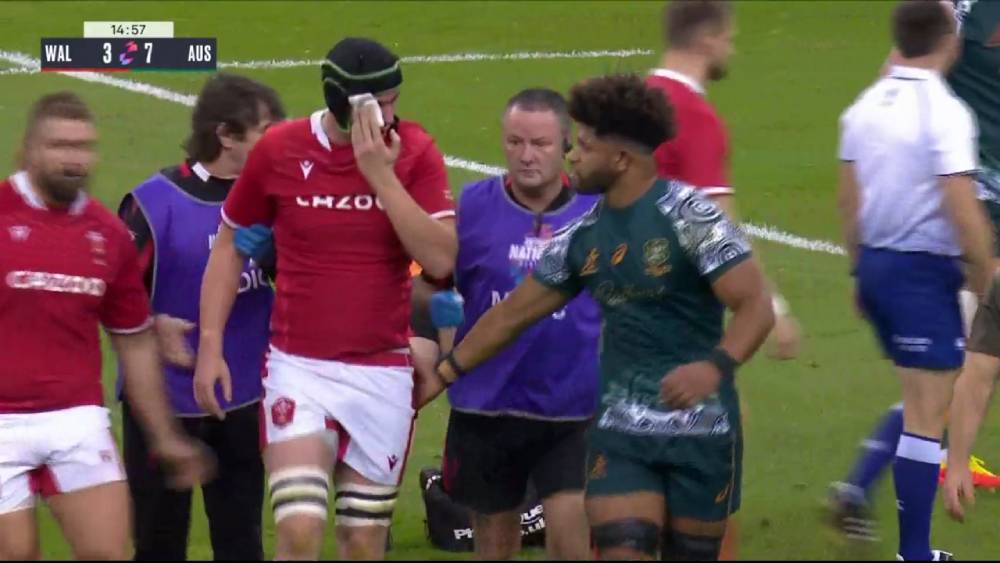 There is no play-acting by Beard, and Wales lost his lineout-calling services for the rest of the match. The body language after the event tells you all you need to know: Bobby Valetini is contrite and he knows exactly what the outcome will be.

The letter of the law [1] does not describe the punishment for dangerous play, only stating that “A player who commits foul play must either be cautioned or temporarily suspended or sent off.” The protocols (which changed a couple of years ago) can be found here.

A few minutes later, Australian full-back Kurtley Beale was yellow-carded for a deliberate knock-on in the action of tackling Welsh centre Nick Tompkins: 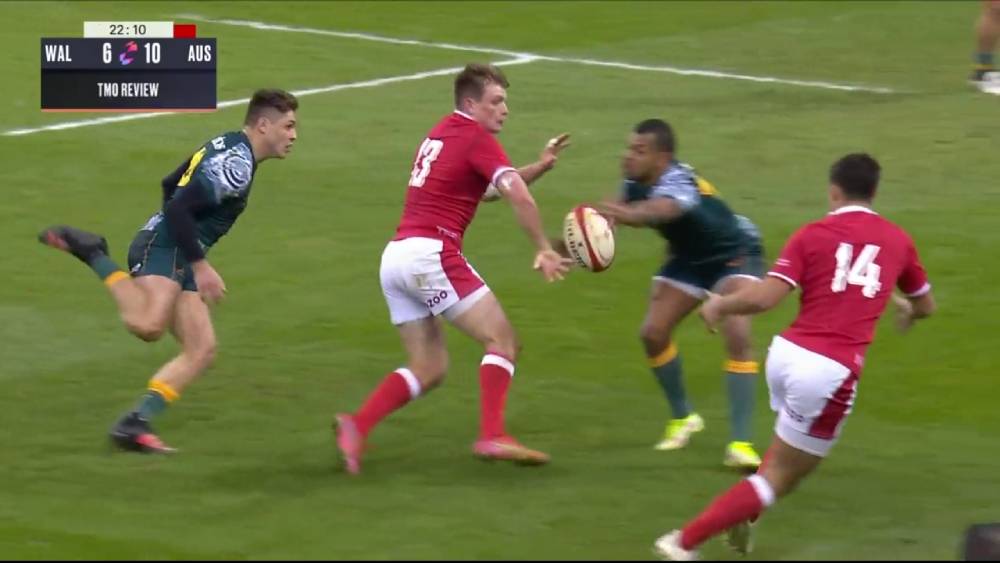 The letter of the law only remarks that “a player must not intentionally knock the ball forward with hand or arm”. It is left to the protocols to establish the degree of punitive action. In this case, the conversation between the referee and TMO included the ‘unnatural’ wide sweep of Beale’s left arm. As the last defender in the line, players are coached to try and make contact with the ball as part of their tackling action.

Once again Nick Tompkins’ immediate response is significant. He knows what Beale is trying to do, and he knows what the sanction should be. According to the current view of [2] and [3] there is no argument against the yellow card.

The third decision was an example of a situation where [1] does not agree with [2] and [3], so there is a loophole in consistency:

The scenario is exactly the same for Tompkins on defence as it was for him on attack in the earlier example. Like Beale, he is trying to knock the ball down in the action of tackling Tom Wright.

By the letter of the law the ball does not go forward, but the reactions of all of the players in red and green imply the protocol: if the ball hits the ground in front of the player, it is always called as a knock on. Everybody knows, and everyone on both sides stops playing immediately. Tompkins’ reaction is the same afterwards – a rueful shake of the head at an incredible bit of good fortune. ‘Never look a gift horse in the mouth’, as the saying goes.

Did the forwards lift enough to feed our backs the quality ball they needed? An improvement is not a dominant display and I didn’t see too much dominance in our forward effort. – Stillmissit

What do the stats say for how the three French-based players went? Now on to Super Rugby next year, what do we need from Super Rugby? I think there will be some more players who will put their hands up for Wallaby selection and outplay the incumbents.
– Bodger

With the Australian and New Zealand brand of rugby struggling against the Northern Hemisphere highly-structured play, how will the further concentration of the ‘Trans-Tasman brand’ in a Super Rugby competition, sans South Africa, further affect our competitiveness?
– Quagmire

I think we need to ask more about the Giteau law and if it should be scrapped altogether. With Marika now off and our best hooker BPA also off, do we need to truly take that step and go the way of South Africa?
– The Ferret

Do you feel that what Rennie would have learnt about the Europe-based players justified leaving behind some younger squad members and not selecting squad regulars like Swain and Philip?
– JC

Seems like there was another dodgy maul try against the Wallabies, where the players were pre-latched. Out of the all the ref errors, Wales’ maul try was the most frustrating.
– Elysius Rugby

A lot of questions also about the impact of the European-based players in the Wallaby team, especially in the second row, where Rory Arnold and Will Skelton are currently playing in two of the top teams in France – so too, Izack Rodda until very recently.

Here is a comparison, giving a rough guide to second row performance in the course of the international season (end of year tour for the first three, Rugby Championship for Philip and Swain):

The biggest single difference is in lineout performance. The Wallabies ranked dead last on own-ball lineout during the Rugby Championship (82%, dropping to 74% including spoiled or unusable ball). With the lineout captaincy shifting over to Izack Rodda, it blossomed to 89% on tour, and steals on the opposition throw also increased from 14% to 17%. There was no significant drop-off at lineout time when Rory Arnold left the field to be replaced by Will Skelton around the 50 to 60-minute mark. Returning the lineout captaincy to either Matt Philip or Darcy Swain would be a definite backward step in 2022.

With the greater emphasis in Europe on accurate set-piece play, the presence of Rory Arnold in particular as ‘banker ball’ is also important, and allows more flexibility in the selection at number 6. Arnold also led a dominant defensive effort at the maul against all three opponents. Neither Scotland, England or Wales got any change out of their attempts to muscle their way over the Australian line from close range:

Arnold penetrates so quickly on to the ball that there is literally nowhere for the England and Scotland lineout drives to go.
Wales and Scotland were forced to use trick plays in order to make progress in these situations: 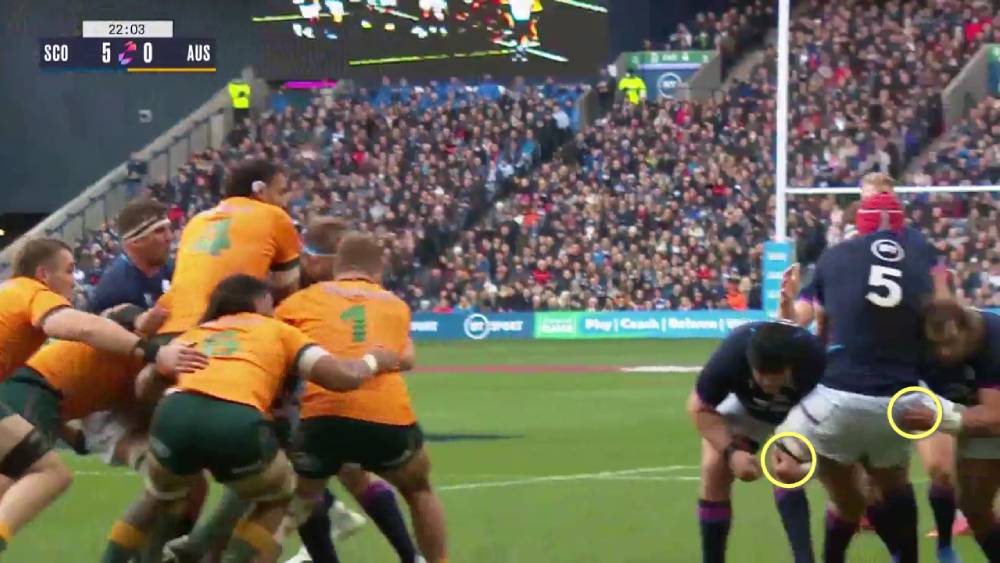 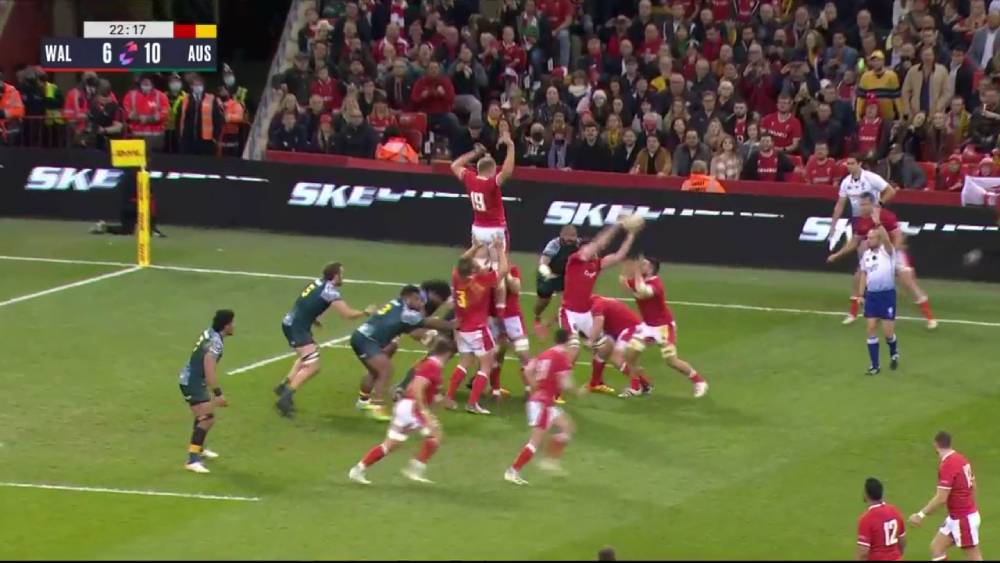 There’s also a crucial difference in the two examples under law. Where Scotland’s move was illegal and should have been penalized because there were two forwards pre-bound in the front pod (“an illegal type of attack…team-mates are latched on each side of the ball-carrier in a wedge formation before engaging the opposition”), Wales were okay with only one forward latched on to the receiver at the front.

There is no reason that Arnold and Rodda should not keep their Wallaby starting spots in 2022. The jury is still out on Will Skelton from the bench. He showed improvement against Wales, culminating in what should have been a game-winning turnover on the deck late on (he won 10 such turnovers in last season’s Top 14 for La Rochelle) so there is a clear point of difference if Dave Rennie can find more effective ways to get his ball-carrying ability and offloading into the game.

Could you explain the difference between Antoine Dupont and Aaron Smith when they were caught in possession of the ball at the base of the ruck, and the way ref Barnes ruled it? I suspect Barnes was correct in his rulings but I would like it clarified. By extension how did you feel about the contest between the two half-backs?
– Otago Man.

There is just time to included a brief answer to this interesting question. Part of the charm and intrigue of the comparison between the two best half-backs in the world is that their strengths are so very different. Dupont is a runner who stands close to the base, standing up to the opposing forwards and wanting to set up his own on the carry.

Even with three New Zealanders on top of him, Dupont finds a way to create some go-forward on the play. Where the Frenchman sets up to scoot, Aaron Smith sets up to pass:

It makes him more vulnerable to pressure at the base, but it also creates tries which Dupont would not be able to deliver:

Be sure to look in next week!