BRETT GEEVES: Marnus, Smith schtick is infuriating and must be countered by impactful verbals

There were two moments in this Test where I had to turn the TV off and seek comfort food.

The first was watching Marnus Labuschagne and Steve Smith bat together. The extravagant leaves.
The self-commentary. The third person congratulatory self-talk.

The continual shouting of “NO-RUN”, at a decibel level deafening for Xmas shoppers in Hindley Street.

As an aside, in case you don’t know Adelaide, night-time shoppers of Hindley St are hunting very different things than day-time shoppers.

But the clincher for this angry bogan were the overt displays of body language whenever an English bowler got some seam movement, or bowled a leg cutter, off-cutter or any other type of ball set to do something off the wicket.

It was of the utmost importance to the two aspiring street mimes that every spectator, player in the game, members of both coaching staff and cameras, broadcasting to the world, knew that they had just survived the greatest individual ball ever delivered.

If they were teenagers, each delivery would have received its own diary entry.

The entire partnership was like watching an under 9 free form jazz recital, with over laid commentary from a character Rob Sitch would play in an ABC satire, such was the level of outrageousness in communication.

I’m old school. From a different generation of cricketers. And honestly, I hated it. 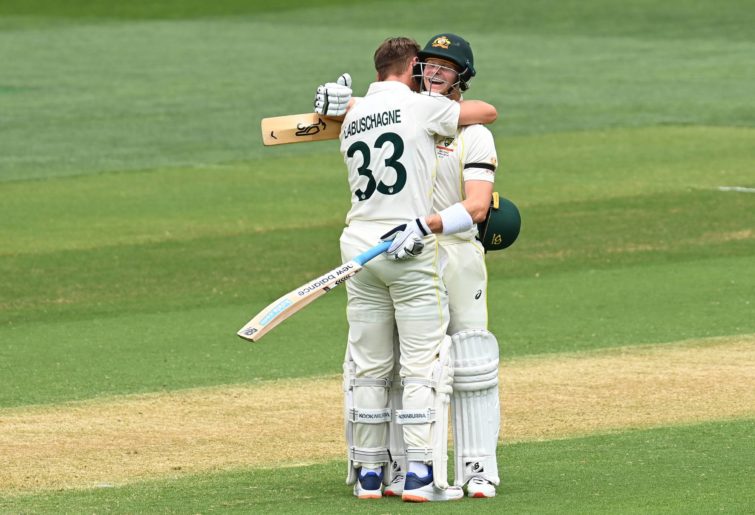 Even Ricky Ponting, the most passionate supporter of all things Australian cricket, put his hand up to say he would hate playing against it too.

But I get it. This act works. And I respect (and, yes, am jealous of) the level of ability, and decision making, to be able to operate at that level on the international stage. It is staggering how in control they both were in the first innings.

Ultimately, all that matters is that it impacts England. And that is clear. The Poms hated it most.

It would be incredibly confronting, and demoralising, as a bowler to be constantly mocked by two guys who are making your efforts look pathetic. I’m surprised no code of conduct was breached by the English players. That is where embarrassment takes you in sport.

Sadly, I’ve been there. Whenever Phil Hughes shouted, “WAIT ON”, it was like a dagger to my ego, and soul, and hurt me more than his 22nd boundary of the day, second hundred of the game, and so on with the records for Phil against Tasmania. Phil was special. And his dominance of Tasmanians from that era allows us a little empathy for the Poms bowling to Smith and Marnus, who I must add, are on their own level of ego crushing behaviour.

So, how can England impact the momentum and confidence of Smith and Labuschagne?

Verbal. Hard verbal. Impactful verbal. Relationship changing verbal. 100% of your match fee level verbal. It is the only way I can see England winning back any momentum when either Smith or Marnus are doing their thing.

The other act of disrespect that had me hunting another chocolate covered pretzel was Michael Neser scratching at the bowling crease after every delivery.

After a decade of playing with Benny Hilfenhaus, who did the same thing, it brought back a flood of memories and the reason my poor left ankle barks at me on cold Hobart mornings.

When it comes to landing areas, I don’t know a fast bowler who is comfortable with their front foot landing in a pothole, or a trench, or any surface that isn’t dead flat. The human ankle isn’t built for that level of instability.

If you’ve seen Shawshank Redemption, you’ll know you only need to remove a little dirt in every sitting to create a big enough hole to fit a fully sized human through a wall. Applying The Dufresne theory, by day five that crease line from the every-ball-digging-bowler is a moon crater.

Bizarrely, the hole being dug by the scratcher doesn’t ruin the landing area for them, but trust me, for everyone else it is a long-term injury waiting to happen and means everyone other bowler in the game is having to deliver the ball exclusively wide of the crease.

One day at the SCG, Hilf carved a hole so big that the curator had to dig out a fresh crease from the practice wickets and cut it into the centre wicket, so the game wasn’t played exclusively from around the wicket at that end.

A Queensland insider tells me that Neser has been causing the same headaches for his state based fast bowling brethren. And that during one shield game v Tasmania, Jackson Bird was openly cussing him out every time he bowled a poor ball because he was wobbling on the edge of Neser’s attempt at escaping Shawshank.

Queensland insider also shared with me a long-standing Bulls tradition, of which Neser is the current champion. He is the Bulls Goanna Pulling Champion, having defeated Nathan Reardon in 2015 and has been undefeated since. (Yes, of course it’s real.)

Moving forward to Boxing Day, the Poms need more of the above and less of the 128kph trundlers. They need a spinner. Even if it is Jack Leach. They need Mark Wood back in the team to provide air speed and grunt.

They also need batters with techniques that can withstand the pace and bounce of Australian surfaces. More Root, less Burns, whose bat path goes from high, to wide, to over to under… his arm as he trudges off the ground. And that ain’t it.

They’ve played nice. Smiled lots. And this needs to change.

But perhaps their biggest chance at saving this series comes in the form of COVID and the potential of a shutdown, through the ever-growing case numbers of the Omicron variant, which say’s plenty about England’s cricket so far in this series.