Australia have just won the men’s Ashes by four Tests to zip. By the standards of some recent, far more momentous Ashes series, they hardly had to break a sweat to do it. If only England’s rugby team would be so compliant this July.

With the Red Rose still coached by a pugnacious Australian in Eddie Jones, it ain’t gonna happen. Eddie will be beadily eyeing his perfect winning record against the Wallabies, with every intention of extending 8-0 since his takeover in 2016, to 11-0 by the end of July.

Nonetheless, there are genuine grounds for hope for those adorned in green-and-gold, because England are at a crossroads. Jones has reached perhaps the single most important fork in the road since he moved back to the UK. A 93 per cent winning record against the top eight rugby nations over his first couple of seasons has dwindled to 58 per cent since 2018.

The media pressure on his playing (and coaching) selections in the UK has reached a correspondingly high watermark.

At no time in his career with England has the choice between playing styles at club level been so stark and clear-cut. There are teams founded on relentless defence and kicking (Leicester and Saracens), the quick-strike attacking artists (Harlequins and Bristol) and possession-based grinders like Exeter and London Irish.

It has created a plethora of decisions that need to be made in some key spots in the back-row of the scrum, and in the midfield behind them.

Who will play in the key playmaking positions? Only two of George Ford, Owen Farrell, Marcus Smith and Henry Slade can be shoehorned into the number 10 and number 12 (or, in Slade’s case, number 13) jerseys.

How does Eddie pick his starting back-row from the likes of Tom Curry, Sam Underhill, Alfie Barbeary, Alex Dombrandt, Sam Simmonds and Billy Vunipola? Over the next couple of weeks, I will take a look at some of the selection issues.

In this article, I will examine the forwards.

The area of least controversy is the second row, where two 2020 Lions in South Africa, Maro Itoje and Jonny Hill, are clear-cut first choices. Australia will need Rory Arnold back from France, and there are only two weeks separating the final of the Top 14 on 25 June and the first Test on 9 July.

The plot begins to thicken in the front and back rows of the scrum, to the point where it becomes darkly Shakespearean in the selection at number 8. There will be hidden media knives glinting behind every arras when Eddie’s choice in that position becomes evident.

It is a concern – and perhaps, an echo of Eddie Jones’ history with Australia circa 2005 – that England best pure scrummaging choices at prop remain a 31 year-old in Joe Marler at loose-head, and 34 year-old Dan Cole on the other side. Both have been anchoring the England scrum for the better part of a decade now, and it is still hard to find a better pair of set-piece bookends in the English Premiership.

One prop who may be towed in on the tide of the magical Marler renaissance is his Harlequins team-mate Will Collier. Kyle Sinckler will be first choice tight-head, but Collier has been one of the two most effective English-qualified scrummaging No.3s in the league. Harlequins have the best win percentage on own ball in the Premiership at 96 per cent, and they have the best penalty differential at the set-piece (+17).

The recent European Champions Cup tie against Cardiff illustrated Will Collier’s quality on both sides of the feed: 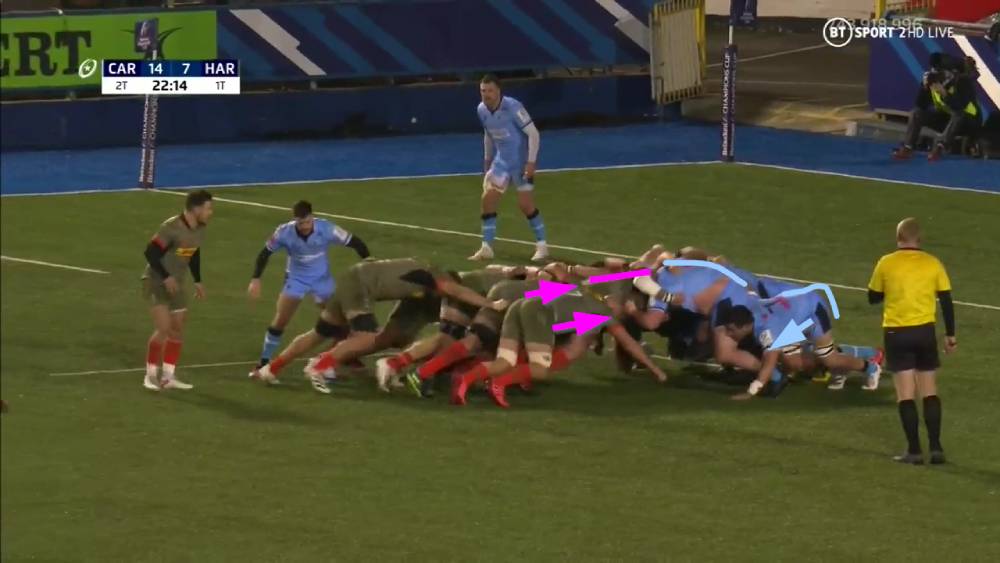 Collier is opposite a current Wales international in the shape of Rhys Carré, and he is giving away three inches and over 15 kilos. Collier’s point of difference is his speed into ideal body-shape after ‘set’. His back is flat and aligned to transmit power from behind immediately, and when the loose-head tries to work around him he can drill the gap.

The comparison was even more brutal on Cardiff’s own feed:

The success of Marler and Collier may yet pull Jack Walker into the touring squad as a third hooker behind Jamie George and Luke Cowan-Dickie.

The knives really come out when talk shifts to the pivotal number 8 spot. Warren Gatland ignored the claims of the usual suspects and picked Sam Simmonds ahead of any other English number 8 for the 2020 British & Irish Lions, but Simmonds was only ranked third in the pecking order, behind Tom Curry and Alex Dombrandt, for the end of year internationals in 2021.

The main claimants to the jersey ahead of the 2022 Six Nations appear to be Curry, Dombrandt and a resurgent Billy Vunipola. Here are the raw stats for the three from the English Premiership – first, on attack:

We know that Vunipola is a heavy-duty ball-carrier who will produce plenty of positive yardage, and that Tom Curry is an intense competitor on defence. The wild card is Harlequins’ Dombrandt, who makes more profound impacts than the other two but has far fewer overall involvements.

Jones is still intent on developing Curry as the number 8 he believes is there in embryo. The first time Eddie announced he was picking Curry at the spot was on the eve the second game of the 2020 Six Nations against Scotland.

“I think Tom can be a [All Black] Rodney So’oialo-type player – a mobile, hard-running eight who has ball skills,” said Jones.

“We can’t find another Billy so we won’t go down that track. Instead, we’ll find a different sort of player…

Ahead of the November tour games in 2021, he was singing very much from the same hymn-sheet.

“With the back-row we have got, initially with Courtney, a pretty strong ball runner, and Underhill is strong over the ball and will give Tom a chance to mix his game between running and linking and his defensive work. He has got the ability to do that,” Jones said.

“There is two players in the world that are similar in that aspect. It is him and Ardie Savea. That are both outstanding natural sevens but have got the capacity to be outstanding eight’s because they have the ability to carry the ball, to link and still do the defensive work.”

That theory depends heavily on Curry improving his output with ball in hand, and there has been some evidence of that development. Here is Curry playing at first receiver for his club Sale: 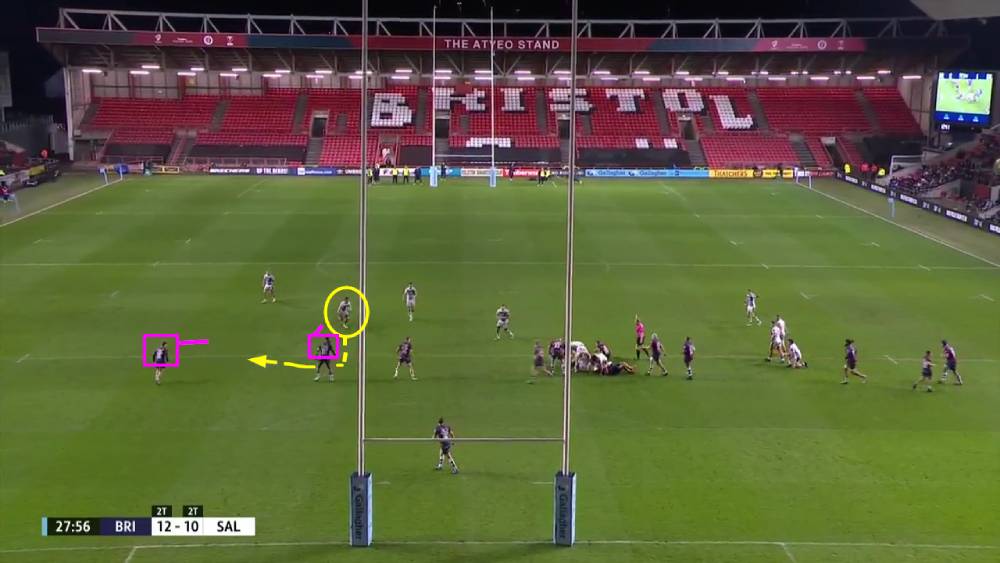 It is a run full of genuine footballing nuance. Curry angles towards the man in front of him before cutting out towards the defender on the end of the line. It is like a very precise pass route run by a wide receiver in American Football, and both defenders are drawn towards Curry, freeing up the players outside him.

The problem lies in Curry’s lack of carrying power. Like it or not, he is no Ardie Savea – let alone Billy Vunipola – when there is no choice but hard contact:

Most the English media clamour has been in support of Dombrandt’s claims to the number 8 jersey. The Quins back-rower has a rare knack of scenting and creating attacking opportunity. But he is also a giant centre in a 6’4, 120 kilo body and is at his best playing with the backs. Most of the hard yards carries are left to the other members of Quins’ back row (typically James Chisholm and Jack Kenningham at full strength).

Perhaps Dombrandt’s greatest USP is his uncanny rapport with Marcus Smith at number 10:

Whether passing or kicking, Dombrandt is often on the end of Smith most telling contributions. Carries by the other Quins forwards are regularly designed to preserve Dombrandt as an in-pass option for Smith: 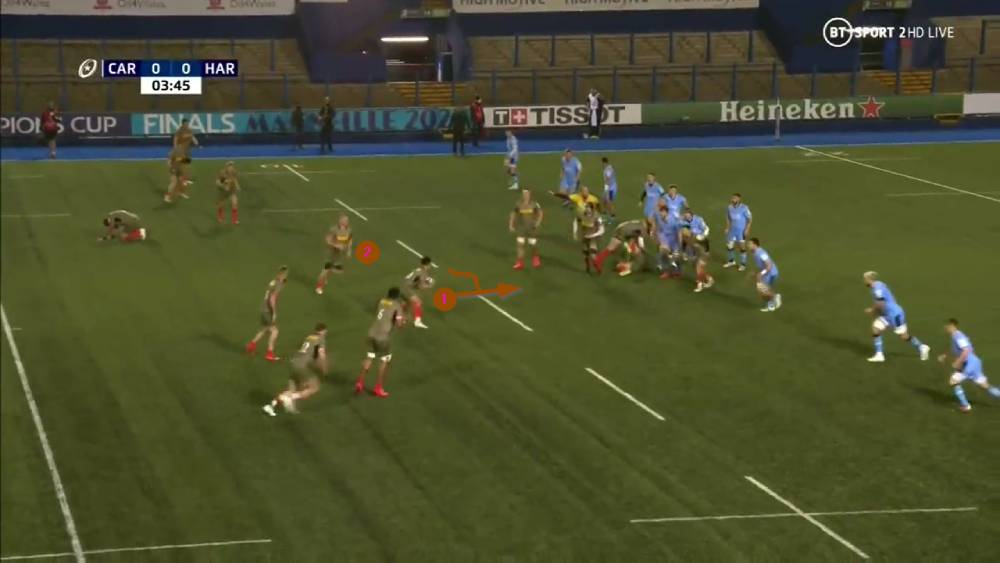 The idea is to link Dombrandt with the other Quins’ backs, in the same kind of role Eddie Jones envisages on attack for Tom Curry:

In the first instance, Marcus Smith is inserted in between the side-line ruck and Dombrandt in order to flush him into space. In the second example, The Quins number 13 Joe Marchant has been shifted out to the left wing in order to accommodate Dombrandt in the centres from an attacking lineout, and only comes into view at the very end of the score by Louis Lynagh.

Summary
There is no question Jones is under more scrutiny now from the English rugby media than at any other time in his career as head coach of England. Although it is still positive, his winning percentage against the top-tier nations has declined steadily after a sensational Henry or Hansen-like 90-plus per cent start in 2016 and 2017.

At club level, the opportunity to play a different sort of game has emerged with the success of Harlequins in the Premiership. The spartan diet of kicking and defence, which has been England’s staple in recent seasons, no longer seems obligatory.

There is growing pressure to include the talents of players like Marcus Smith and Alex Dombrandt in the starting XV, and that pressure (at number 10) will only sharpen when the likes of Owen Farrell return to full fitness. At number 8, Dombrandt still has a lot of work to do to overhaul Tom Curry and Billy Vunipola as a run-on prospect.

There will be an opportunity for the Wallabies to ask searching questions about what kind of playing philosophy really underpins Eddie’s England, and in next week’s article, I’ll take a look at some of the options in the back-line.