They have done it!

The Australian Women’s Cricket team have been crowned Women’s ODI World Cup Champions after a dominant 71 win over England in the final at Hagley Oval, Christchurch.

The Aussie women now have another trophy to add to their already bulging trophy cabinet and it was a fitting way for Meg Lanning to celebrate her 100th ODI appearance for Australia.

The day started with good news for Australian fans with Ellyse Perry returning to the team after missing the last two matches with back spasms. Unfortunately, that meant that Annabel Sutherland dropped out of the squad after playing an important role in the Australian semi-final win against the West Indies.

After naming an unchanged team from their semi-final, England captain Heather Knight won the toss and sent Australia in to bat. That may have been one of the highlights of Knight’s day.

I wonder whether she may have made a different choice at the toss if she could have looked into a crystal ball and seen what was to come.

Here are the talking points from today’s game.

Australia came into the game as heavy favourites, having only lost two of 41 ODI matches since the last World Cup in 2017. That is an astonishing record and one which continued today thanks to several incredible performances in the Aussie team.

Let’s start with Alyssa Healy who scored 170 not out off 138 balls pushing Australia to a huge total of 5-356. It took 62 balls for Healy to score her first 50, but just another 38 deliveries before her second.

This was Healy’s second century in two games; a remarkable feat made even more impressive because she has hit both centuries in finals matches.

Healy even broke records set today. Rachael Haynes scored 68 runs, which pushed her to the top of the table, breaking the record for most runs at a women’s World Cup. But Healy decided that was a record she wanted to break too, outscoring her opening partner and claiming that record too.

So dominant was Healy’s performance that it overshadowed solid batting from others, including the 68 scored by Haynes and the 62 off 47 balls scored by Beth Mooney.

Australia’s batting has been impeccable throughout this tournament and has really left them almost untouchable throughout. That’s the beauty of having a batting line-up that runs so deep; a couple of cheap wickets at the start is not necessarily problematic because players like Meg Lanning, Ellyse Perry, Beth Mooney and Ashleigh Gardner are waiting to take their opportunity at the crease. 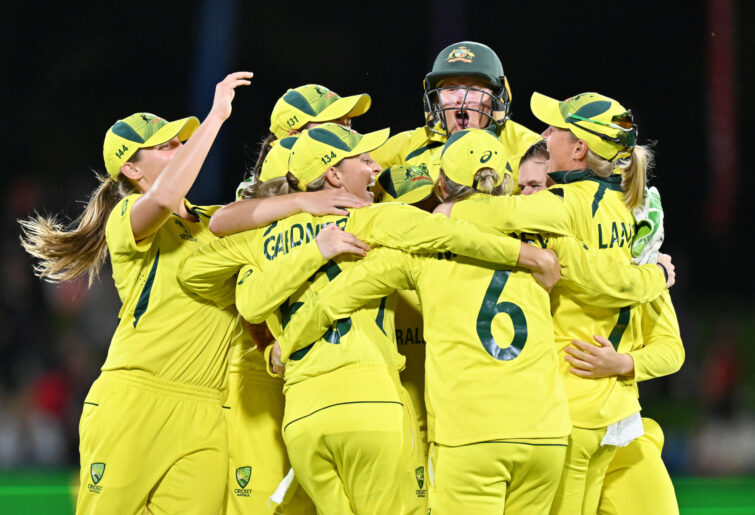 Good, but not good enough from England

To win this game, England needed to manage the best ever women’s ODI chase. Whilst Natalie Sciver kept them in the hunt, it was always going to be a difficult task when the next highest score behind Sciver’s 148 not out, was 27 by opener Tammy Beaumont.

It was an impressive century and performance for Sciver with an innings that was the third-highest in a World Cup, but ultimately she did not have the support she needed at the other end.

Alana King was the pick of the Australian bowlers, taking three wickets and dismissing Knight, Sophia Dunkley and Katherine Brunt. Megan Schutt also did plenty of damage removing both openers.

England chased admirably, but the reality is that with the investment that Australia and the states have made in women’s cricket, the Australian team is at another level to all the other teams.

There have been times that the Australian team has been challenged throughout this Tournament, but not enough to make me nervous or consider whether another team was going to seriously challenge them in the final.

England had their opportunities; with Healy being dropped on two occasions throughout her innings. The first drop happened when she was on 47 runs, with a simple mid-wicket chance being put down by Sciver and then she was put down again on 136.

Even the Tournament’s leading wicket-taker Sophie Ecclestone struggled, finishing her spell on 0-77.

Whilst England are working to catch up to Australia through the introduction of competition’s like the Hundred, the reality is that for the dominance of this Australian team to be consistently challenged, it is going to require much greater investment from other countries.

Until that happens, I see this Australian dominance continuing into the future.