Much of the talk after Gold Coast’s upset win over Sydney at the SCG went straight to the Suns’ superb recent record against the Swans. And it’s true – Stuart Dew’s team have now won four of their last six games against their most recent victims, including three of four in the harbour city.

But there’s something even more worrying at play for the Swans: the SCG itself is fast becoming a bogey venue. That’s not ideal when it’s your home ground – and unlike the Suns, they’ll have to face it many more times for the rest of the year.

For much of 2022, and on occasion in 2021 as well, the Swans have struggled to get their trademark free-flowing, sharp-kicking, lightning quick game plan going at the SCG, famously the smallest regular ground in the AFL. In four games so far this year, they are 2-2, having also lost to Brisbane at home last week; while one of those victories was a thriller against the seriously struggling North Melbourne.

Add that to their form last year, where they were thrashed by Hawthorn there and scraped past a shockingly inaccurate St Kilda in their final two games, and a problem starts to become clear.

So, what’s causing this dire run? Against the Suns, the issue was kicking. The Swans committed 68 clangers for the game compared to the Suns’ 48, regularly coughing the ball up looking to bite off risky kicks to open up the corridor, as is their wont.

Where grounds like the MCG and Optus Stadium offer greater space for players to lead into, and make it harder to shut off damaging balls into the corridor, the Swans look a million bucks. But too often in recent times has the Swans’ modus operandi backfired on them – and nowhere more than at the SCG on Saturday afternoon.

To the Suns’ credit, they shut this kick inboard down all day, and benefitted immensely from it. In the final minutes of the game, with the Swans making all the running, they regularly looked to kick into the middle and find an option to set up an attacking chain, and it came unstuck every single time.

The result was just 41 inside 50s for the day, well below their season average of 55. They won 68 and 65 respectively in their most recent wins over West Coast and Hawthorn, played in Perth and Tasmania respectively.

To be fair, they only lost the clanger count narrowly last week to Brisbane, while just 47 inside 50s at the SCG in Round 2 didn’t stop them cutting Geelong to ribbons with the same approach. But that’s when we get to the Swans’ second weakness: at the coalface.

With smaller confines brings extra congestion: that’s just a basic fact. A smaller ground, even marginally, is likely to bring about more congestion, and hence more stoppages. Especially if you’re like the Suns this week and Brisbane last, and keen to force as many of them as possible knowing the Swans have a weakness there to exploit.

With Josh Kennedy moved out of the centre rotations and Luke Parker spending chunks of time forward, John Longmire is clearly after speed around the ball as opposed to grunt work. Chad Warner, James Rowbottom and Callum Mills are the new leaders of the Swans’ midfield, with all (Mills might be an exception on his day) more suited to winning the ball on the outside rather than the inside.

No Swan so much as reached 10 contested possessions on Saturday afternoon, compared to four Suns: Matt Rowell (15), co-captains Jarrod Witts and Touk Miller (11 apiece) and defender Wil Powell (10). That helped give the visitors a slight but crucial edge in that stat (139-124) and the clearance count (36-29).

Last week, a victorious Brisbane expressed post-match their desire to curtail the Swans’ spread, clamping down on their ability to move the ball freely. They were able to pull that off, as did the Suns – and intuitively, the ground’s size seems likely to have had an impact.

It’s no accident that the Swans won two premierships in the last 20 years off the back of brutal, relentless intensity at the coalface. Where they played most of their footy, the SCG, was an ideal ground for it.

But if they can’t find a way to open the ground up more with a new style, the Suns’ win on Saturday won’t be the last time the Bloods are upset on their home turf. 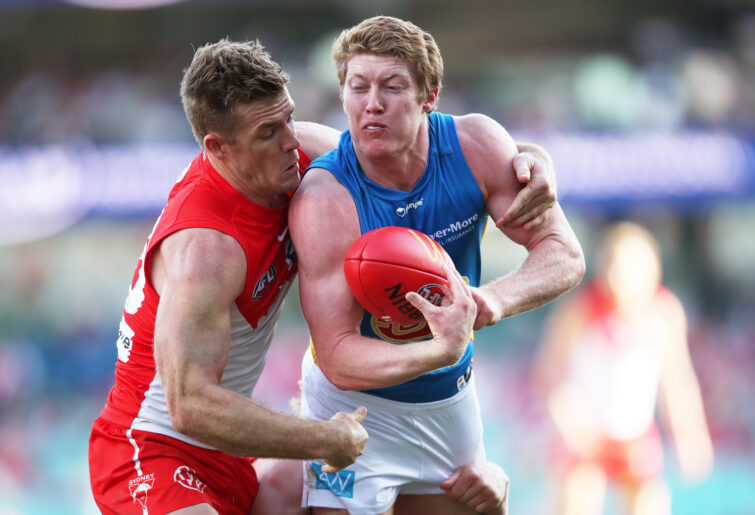 Matt Rowell of the Suns is tackled by Luke Parker of the Swans. (Photo by Matt King/AFL Photos/via Getty Images )

Speaking of opening the ground up, Essendon’s victory over Hawthorn on Saturday evening was down to two things: picking up every single part of their style in defeat to the Bulldogs last week, and throwing it in the sea.

This couldn’t have been a more different Bombers outfit to the handball-happy, ridiculously inefficient outfit of the past few weeks. With a newfound determination to kick the ball long, get the ball to boot rather than backwards by hand, and always forward, ever forward, the Dons stunned the Hawks in the final term with eight goals to one.

With no less than five late withdrawals, including a best and fairest winner in Jordan Ridley and a series of other key role-players, this was a famous victory for the red and black, and one that suggests, even if this season does end up being a write-off, the future is still bright.

It’s not often that a stat as simple as number of kicks can be so illustrative of a change of style, yet that was the case tonight. The Bombers’ kick-handball rate in their last three weeks (defeats to Fremantle, Collingwood and the Bulldogs) read 191-171, 195-192 and 208-185. Tonight, it was 223-129 – fewer disposals than in any of those three games, but infinitely more impact.

Case in point: this effort from Mason Redman, which only didn’t put the Bombers in front because of a free kick on the goal line. But can you imagine a Bomber in the last few weeks having the dare and the courage to play on 70 from goal, call in for a shepherd, and launch for home?

Central to it all was the dashing figure of Nick Hind across half-back. Everyone knows his one-wood: he’s just about the quickest man in the league. But with precious little room or encouragement to run and gun so far this year, his form tapered to the point where he was dropped. Tonight, he was almost the most influential man afield, with 18 kicks and a game-high 552 metres gained.

In the middle of a career-best year, nobody benefitted more from the frenetic pace of the game than Peter Wright. Allowed to lead into space or given one-on-ones to use his strength, the big Bomber was simply too good for the Hawks’ usually watertight backline.

It was similar to how St Kilda had separated the Hawks’ backline a few weeks ago, with similar devastating results.

For the Hawks, it’s yet another match where they have been incapable of stopping an opponent coming home with a wet sail, having leaked nine goals to Sydney just a fortnight ago.

It looked for all the world like the Bombers had been freed up during the week – those much-maligned smiles at training yet more proof of that. It’s a style that still needs some work – but one that Essendon appears far, far more suited to than what it has produced thus far this year.