REVEALED: Josh Frydenberg's to-do list as the AFL's next CEO

First we scoffed at it, then we laughed, then we got angry… but now, it seems a real possibility that Josh Frydenberg – yes, the bloke that was just turfed out of his safe Liberal seat – could be the next AFL CEO.

Prominent asylum seeker advocate and philanthropist Kon Karapanagiotidis became the first to confirm reports that Frydenberg was set to be named into the top job as Gillon McLachlan’s replacement, in a since-deleted Tweet.

So if the AFL were to once again show it’s Australia’s most tone-deaf organisation and name Frydenberg as their next CEO, here are some things that just might find their way onto the league’s agenda in 2023:

Oh, North Melbourne are debt-free and made a profit last year? Well, all the more reason to ensure they stay that way by making sure they don’t spend beyond their means moving forward.

Under the terms and conditions of the card, the Kangaroos won’t be able to buy star players from other clubs, withdraw funds to pay out-of-contract number one draft picks, and will have a portion of their income deposited into a safe, unreachable account that they can only access from, weirdly, Tasmania.

For unknown reasons, the card’s restrictions are set to become particularly tight during Indigenous Round.

2. Force all non-Australian players to disavow their birth country

If Josh had to give up his dual citizenship to stay in parliament, then sorry Mason Cox, rules are rules.

Under the new system, all players born outside Australia, or with one parent from overseas, must publicly disavow their nation of origin, swear undying fealty to Australia, and commit to singing the national anthem with gusto before every final.

Notably, Mr Frydenberg was willing to make an exception for players who have spent over a decade in Australia, before being reminded that Zach Tuohy plays for Geelong now.

3. Give Port Adelaide back the ‘prison bars’ jumper

This proposal is said to have baffled AFL headquarters, but they went along with it after Mr Frydenberg went on a ten-minute rant expressing his undying hatred for the colour teal.

After testing well in focus groups, Mr Frydenberg will swiftly move to approve the sponsorship with the new GDV CEO, which will reportedly be worth $1 million in the first year before rising to $3.9 million in a decade’s time despite the charity providing nothing extra in return whatsoever.

The offer also requires glowing reviews from Guide Dogs Victoria for both the AFL and Mr Frydenberg’s leadership.

“Time and time again, Josh Frydenberg has shown his genuine care for the AFL and the people with high cholesterol and one-eyedness it serves,” former CEO Karen Hayes was quoted as saying.

5. All draws to be decided by a vote from non-participating teams

Rather than award two points to either side in the event that no team wins (which Mr Frydenberg keeps referring to as ‘securing a majority’), a draw will instead see the remaining 16 teams choose the victor.

However, Mr Frydenberg became enraged when learning some teams planned to sell their votes to more powerful clubs to maintain their bottom line, describing said clubs as ‘fake independents’. 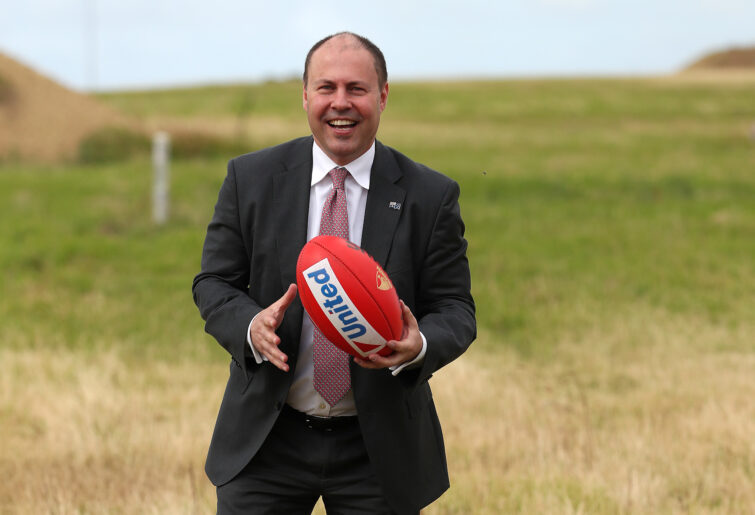 … probably best not to delve any deeper on this one.

After heavy consultation with a bald, evil-looking associate, Mr Frydenberg strongly believes that the right to free speech requires balance between all sides of the political spectrum.

Hence, three ‘Cis White Bloke Rounds’ have been given the green-light by the AFL for the 2022 season, in order to effectively counteract Indigenous, Women’s and Pride Rounds.

In these rounds, white men will be permitted to engage in constant abuse of umpires and players without fear of being ejected, gain access to prime viewing seats, and be as racist and sexist as they please.

So basically Victoria Park in the ’90s.

Having got to know him well during a recent plan to upgrade the Whitten Oval, Mr Frydenberg has issued a staunch defence of Smith’s character.

“These have been very distressing days in the AFL, and I saw yesterday aspects of Bailey Smith’s press conference and you could see the anguish on his face, you could see the effect that it was having on him,” Mr Frydenberg said.

“He’s entitled to the presumption of innocence. We adhere to the rule of law.”

Upon being informed that Smith had already admitted to use of an illicit substance, Mr Frydenberg is said to have fallen silent for 58 seconds, then named Smith head of the league’s anti-doping authority.

In a move that has reportedly blindsided key staffers, Mr Frydenberg appears set to turn his back on his beloved Carlton, which he has supported since childhood.

When asked the reasons for his decision, Mr Frydenberg said that despite recent improvements from the Blues, his admiration for the Swans’ efforts in recent seasons had prompted the change, describing the club as the ‘gold standard’.

“No doubt Carlton has made improvements after the devastating Mick Malthouse era, but Sydney is the gold standard, because they haven’t had a club-wide rebuild, even though they have had clusters of missing the finals, for example, in the late 2010s,” Mr Frydenberg said.

The Blues are weighing up the size of the brown paper bag to offer him to reconsider, according to industry sources.