Rugby fans are about to be treated to one of the most exciting winter tour schedules in a long time when the in-form Irish take on New Zealand on the same days the Wallabies play England, and from an analytical perspective, all six games look highly competitive and too close to call.

My name is Brendon Shields, from Rugbycology, and for my first article for The Roar I want to introduce readers to some of the metrics I use and apply them to the upcoming series. I look forward to sharing some of my data throughout the series and hope to learn from you guys at the same time.

The ball is kicked. Now what?

To introduce you guys to Rugbycology analytics, I will focus in this article on what happens when teams launch their attack from fielding kicks in open play, something we are probably going to see a lot of in the Wallabies matches against England.

These ‘launch ‘platforms are different to starting an attack from kick-offs, because they are not as structured. In fact together with turnovers and free-kicks, ‘kick-returns’ form part of what analysts usually group in the ‘unstructured play’ triad.

During the 2021 Rugby Championship, the Wallabies launched on average 13.3 times from this platform, while the All Blacks launched 12 times.

In comparison, during the 2022 Six Nations, Ireland launched 15.6 times and England 14.7 times from kick-returns. Remarkably during the 2021 Six Nations, the average amount of kick returns was 21.9. Overall everyone is kicking a bit less post the World Cup in 2019.

So while they still kick a bit more up north, most teams will launch roughly the same amount of times from this platform. However Ireland being asked to field 15.6 kicks while the All Blacks only field 12, can suggest a few things:

Ireland has a 35.5% chance of scoring points when they enter their opponents 22, and they are rather good at generating those platforms because Ireland starts on average 8 attacks in their opponent 22. In contrast, New Zealand converts only 21.4% of their 7.6 attack starts in that zone. England converts at 22.4% of their 7.83 starts to points, while the Wallabies convert 34.8% of their 7 opportunities.

Thus if we were to understand why teams are more likely to kick against Ireland, the above statistics provide good insight. But that’s not the entire story. 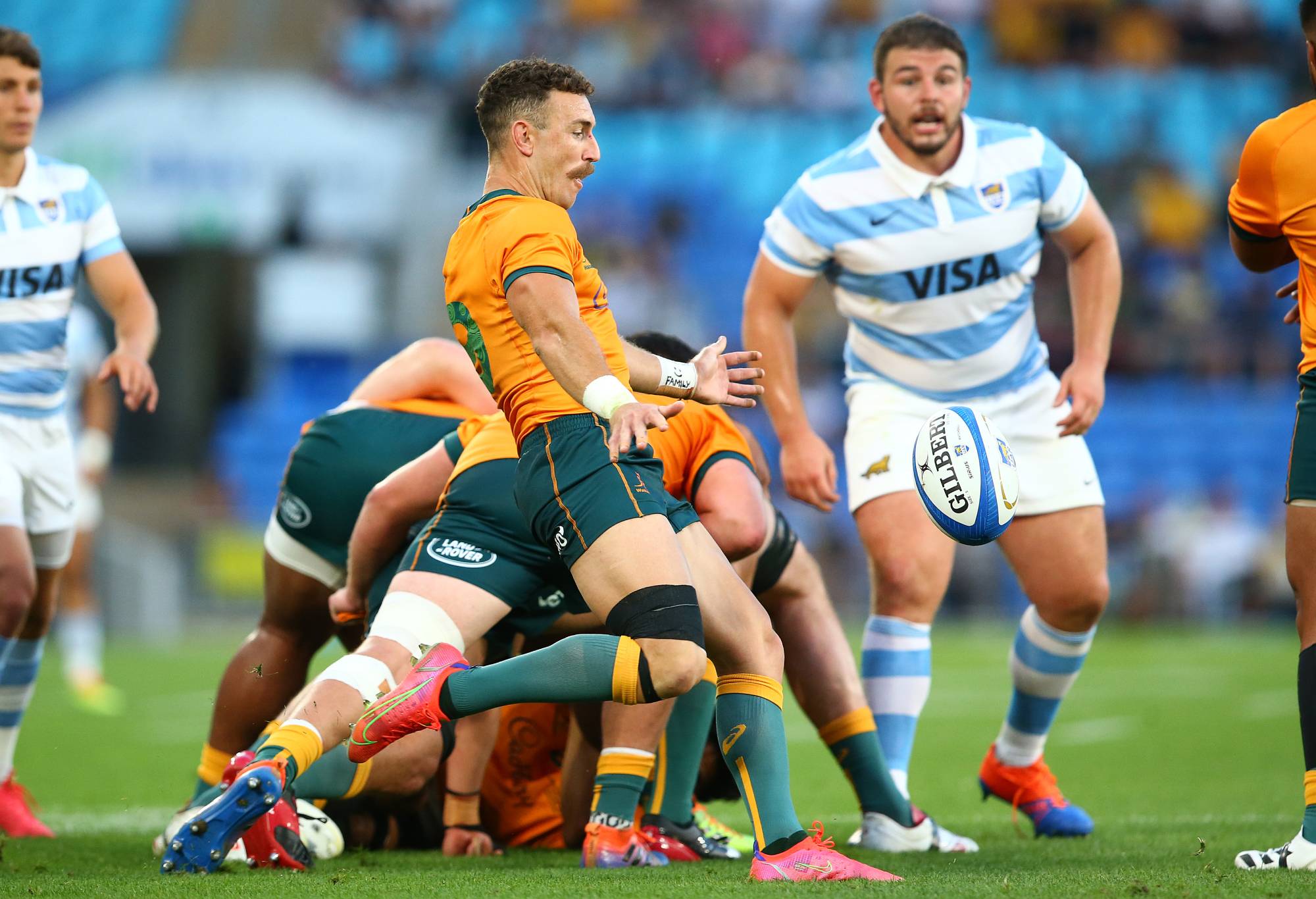 To better understand why teams kick, or why it’s good to kick more against certain opponents, we have to understand the role of kicking and the benefits of doing so. Most people assume that teams kick only to relieve pressure or gain territory.

In Australia for example kicking is often perceived as a negative, because the assumption is that possession is lost – and therefore one positive (territorial gain) is replaced by a negative (loss of possession). I am convinced that this narrative continues to be sold in Australia by nefarious external forces to ensure that the country does not dominate rugby globally!

Indeed if one studies in more detail the outcome of kicks, you quickly realise that the benefit of kicking stretches far beyond just relieving pressure or gaining territory. Teams also kick to apply pressure and to control how and where they must defend. I would argue that a good kicking game is primarily about controlling risk – which is why the current world champions do it so often and why they have learned to do it so well.

I can write a thousand paragraphs on this topic, but for the sake of this article I want to focus on a few key metrics which I hope will help the reader frame the concept of kicking in a new light and add some excitement to this part of the game.

When studying how teams perform, I want to first measure their ‘inputs’, i.e. how they use possession when launching an attack from a particular platform, and the ‘outcomes’ they achieve when using this particular input.

Today we will zoom in on:

Input 1: Using a clearance kick (in other words, punting the ball straight back without taking contact or even making a pass)

What is a clearance kick?

In my analysis I distinguish between two different type of kicks: Firstly, I count ‘clearance kicks’, which is when the ball is kicked a long distance and there is no reasonable way of regathering possession from the kick. Secondly I count ‘contestable kicks’, which by definition carries the possibility of the kicking team regaining possession.

Clearance kicks should be understood as kicks where you need to either relieve pressure or gain territory. Contestable kicks are often shorter kicks like grubbers and chips and box kicks where the aim is to win back possession or tackle the receiver into a new blood type or contest the ball on the ground like a maniac.

What is the high risk loss of possession?

Teams often lose or surrender possession. That’s normal and expected, but I count as a ‘high risk’ loss of possession when the ball is lost to a turnover or a penalty, without a team exiting the original field zone where play started.

Let me explain with an example:

Wales kicked the ball into Ireland’s midfield region (between their own 22 and the half way line). Ireland enters a ruck before crossing the half way line, and Wales wins a penalty from the ruck because the Irish player did not release the ball in time.

This is a ‘high risk’ loss of possession because Wales can now kick for points or kick to touch in Ireland’s 22 etc. In contrast had Ireland managed to cross the half way line and then knock the ball on, their loss of possession is classed as ‘low risk’ because the next play is a Welsh scrum in their own half. Ireland can contest this set-piece!

If a team launches an attack from a kick, which input is more likely to yield a high risk loss of possession? Is it a) making a clearance kick right away or b) running it and entering as ruck?

Running: why do it?

It’s clear from the above data that ‘running it’ carries with it a far greater risk of losing possession to a penalty or turnover in the same zone where the original kick was fielded. So how often do teams try this ploy, and is there a good reason to sometimes roll the dice?

In answer to the first question, Ireland, who faces the most risk from running, will do so 25.6% of the time when launching an attack from an opponent’s kick. They will use a clearance kick 30.7% of the time – so the Irish will use the less risky option more often than the risky one.

And what about the other guys?

All the above teams choose the more risky option over the less risky one! Why one earth would you run the ball when its clearly a more risky option to do so? To find out, I am going to chuck a different ‘outcome’ into the formula and then run the query again:

Teams sometimes manage to exit the original play zone, retain possession and even win a penalty. That’s a massively rewarding tactic if you can pull it off. For example, Barrett (one of the 116 brothers) fields the ball in his own half, and decides to run for it.

He makes a pass to Coles (on the sideline – where else?) who enters a ruck. Ireland contests that ruck illegally – granting the All Blacks a penalty from 35 metres out. The All Blacks therefore ‘conquered’ Ireland by winning territory, retaining possession AND forcing Ireland to concede a high risk play!

In light of the above example, let’s compare our 4 teams:

If we just focus on England for the moment: that team has a 16.82% chance of losing a penalty or turnover in the starting field zone if they pass and ruck it up, yet they post a 25% conquer rate from following this approach. Is it therefore justified that they always run rather than kick? Well that depends on other variables, such as the strike rate of the opposition kicker.

Also of interest in this query is that New Zealand scores so low on the conquer rate when passing and rucking it up. However if I change the input to ‘passing only’, the All Blacks’ ‘conquer rate’ from kick-returns suddenly jumps to 55%!

Data analysis in rugby union is in a good space, with more and more coaches now trusting the science to help them design game strategies. Above I tried to use some examples from the Rugbycology system to illustrate how data is used in the modern game to unlock better play outcomes.

The upcoming series will be vital in helping data analysts such as myself collect the type of data that can inform play strategy by the time the 2023 World Cup kicks off in France. I hope to share more insights on the upcoming series and hereby invite you to engage and challenge me aspects you deem interesting!

Brendon Shields is a data analyst and founder of Rugbycology – a possessions based database that measures and analyses attack and defense outcomes for elite and community rugby teams.

Brendon Shields is a data analyst with Rugbycology, a chronological way of studying rugby union to improve play efficiency.